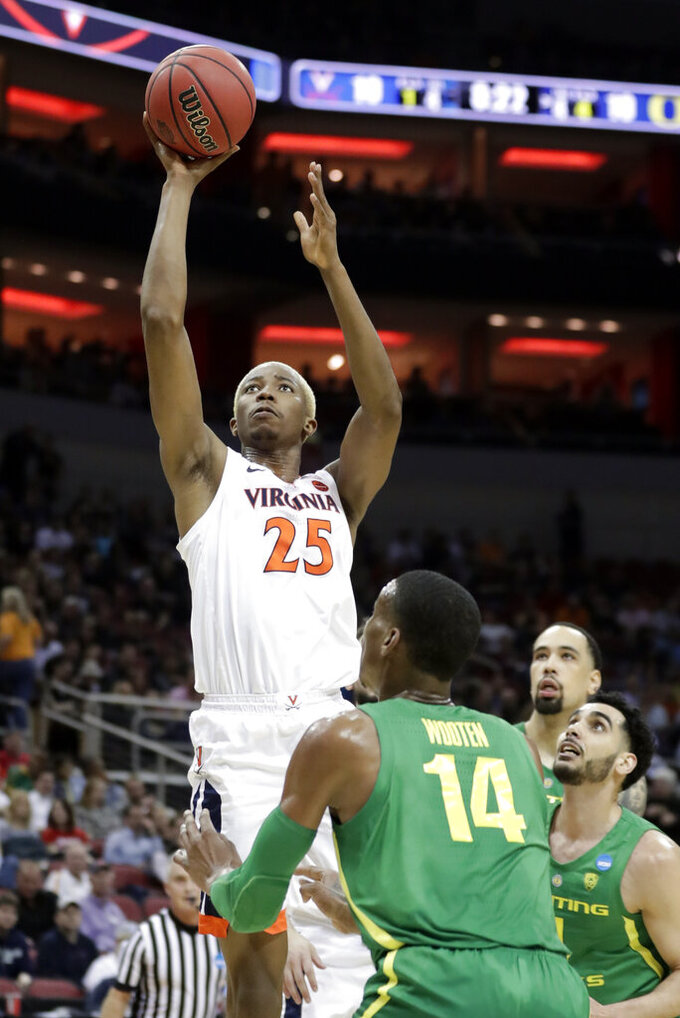 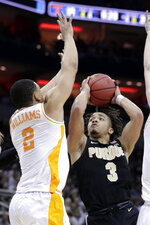 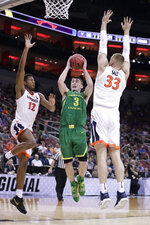 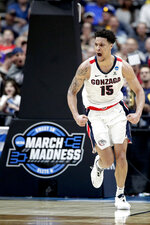 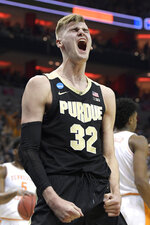 The Latest on the Sweet 16 of the NCAA Tournament (all times Eastern):

Ty Jerome scored 13 points and put Virginia ahead for good by sinking a tiebreaking 3-pointer with 3:34 left as the top-seeded Cavaliers outlasted No. 12 seed Oregon 53-49 in a South Region semifinal.

Oregon took a 45-42 lead on a Louis King 3-pointer with 5:43 left, but the Ducks wouldn't make another basket the rest of the night.

The Cavaliers will face No. 3 seed Purdue in the South Region championship game Saturday. Virginia is seeking its first Final Four appearance since 1984, while Purdue is trying to get there for the first time since 1980.

Ty Jerome has hit a tiebreaking 3-pointer with 3 ½ minutes left to give Virginia a 48-45 lead over Oregon.

Oregon grabbed a 45-42 lead late in the second half before Virginia answered with six straight points.

Jerome has 13 points to lead Virginia. Louis King has 14 for Oregon and has shot 4 of 5 from 3-point range.

Texas Tech is in a regional final for the second straight year after defeating Michigan 63-44 in the second West Region semifinal in Anaheim, California.

Texas Tech led most of the game and was up by as many as 25 as it held the Wolverines to 32.7 percent shooting from the field. Michigan missed its first 18 3-point attempts until C.J. Baird made one with 22 seconds remaining.

The Red Raiders will face Gonzaga for the right to go to the Final Four. It will be the third time the two teams have faced each other and the second time in NCAA Tournament play. Texas Tech has won both meetings.

In the other late-night game, Oregon leads Virginia 42-40 with 7:58 remaining.

No. 12 seed Oregon is giving top-seeded Virginia all it can handle in their South Region semifinal.

Oregon is staying close because of its 3-point accuracy. The Ducks are 7 of 16 from beyond the arc, while Virginia is 7 of 25.

While this game could go down to the wire, the other late-night game is a runaway. Texas Tech leads Michigan 63-40 with less than two minutes left.

The remaining half of last year's national title game is on the ropes.

A few days after defending national champion Villanova was eliminated, defending runner-up Michigan is now in a huge hole against Texas Tech. The Red Raiders went on a 12-2 run to start the second half and lead 36-18 with 15:53 to play. The Wolverines are 0 for 10 from 3-point range and have turned the ball over 10 times.

Neither team had a good first half offensively, but Texas Tech has been sharp to start the second.

Virginia ended the first half on a 17-4 and owns a 30-22 lead over Oregon at the intermission.

After missing 15 of 16 shots during one stretch, Virginia hit eight of its last 12 attempts in the first half.

The winner of this game faces No. 3 seed Purdue in the South Region final.

The Cavaliers missed 15 of 16 shots during one stretch and trailed by as many as six before rallying late in the first half.

Virginia is outrebounding Oregon 19-12 and has 11 more field-goal attempts than the Ducks.

In hindsight, we should have seen this coming.

Texas Tech, Michigan and Virginia are the top three teams in the country in the defensive efficiency stats at kenpom.com, so points have been at a premium in both of the late games on the schedule.

Texas Tech leads Michigan 24-16 at halftime, and in a game like that, an eight-point deficit feels significant. The Wolverines are 0 of 9 from 3-point range and have turned the ball over seven times.

Virginia, which combines great defense with a glacial pace, is tied at 7 with Oregon with 11:55 left in the first half.

The two games had the lowest over/unders in sportsbooks among all the Sweet 16 games.

Michigan vs. Texas Tech is as advertised so far.

Kenpom.com's top two defenses in the country are tied at 6 at the under-12-minute timeout in the first half. The teams are a combined 5 of 23 from the field and have turned the ball over six times.

The winner faces Gonzaga in the regional final.

The last perfect bracket among NCAA Tournament fans is busted.

A 40-year-old neuropsychologist who had the bracket on NCAA.com had changed his Twitter name to Gregg "Perfect Bracket" Nigl. Mr. Perfect is no more after Purdue's overtime win over Tennessee.

Nigl (NIGH-gull) became an overnight celebrity after making it through the first two rounds with correct picks on all 48 games. It's a nearly impossible feat, even during a tournament that's gone mostly to the favorites.

Purdue is in the South Region final after outlasting Tennessee 99-94 in overtime.

Carsen Edwards made two of three free throws with 1.7 seconds remaining in regulation to force OT for the Boilermakers. He followed with six more in the extra session, including a free throw with 6 seconds left to seal the game. Edwards finished with 29 points.

Ryan Cline had 27 before fouling out as Purdue reached its first regional final since 2000.

The third-seeded Boilermakers face either No. 1 seed Virginia or No. 12 seed Oregon on Saturday.

Purdue won despite shooting 16 of 33 on free-throw attempts and squandering an 18-point, second-half lead.

Tennessee and Purdue are headed to overtime after a pulsating second half in which the Volunteers rallied from an 18-point deficit.

Tennessee actually led by two, but Purdue's Carsen Edwards was fouled shooting a 3-pointer with 1.7 seconds remaining. He missed the first free throw but made the next two to tie it at 82.

Edwards has 23 points and teammate Ryan Cline scored 27. Tennessee shot 20 of 30 from the field and 7 of 10 from 3-point range in the second half.

Gonzaga is the first team in the Elite Eight.

The Bulldogs beat Florida State 72-58, holding off the Seminoles and advancing to face either Michigan or Texas Tech in the regional final.

Top-seeded Gonzaga is trying to hold on against Florida State.

The Seminoles, who once trailed by 14, are down 63-56 with 2:06 to play. They actually were down by just four, but Gonzaga's Zach Norvell Jr. connected on a 3-pointer.

Florida State is just 3 of 17 from beyond the arc.

Purdue is still shooting impressively, and the Boilermakers lead Tennessee 65-51 in the second half.

Admiral Schofield hit his first bucket of the game on a jumper for Tennessee, and the Vols chipped away after trailing by 18, but they haven't been able to match the shots Purdue keeps taking — and making.

Carsen Edwards, who is now Purdue's career leader in NCAA Tournament scoring, has 21 points, bringing his career total to 174.

Florida State's depth continues to be tested as the Seminoles try to rally against Gonzaga.

The Seminoles already were playing without Phil Cofer and David Nichols. Christ Koumadje has four fouls. And PJ Savoy just appeared to injure a shoulder.

Edwards has 15 points, and the Boilermakers lead the Volunteers 40-28 at halftime. Schofield has only one point, on a free throw in the final minute. Tennessee's Lamonte Turner has scored only two.

Both teams have been awful on free throws. Purdue is 1 of 5 and Tennessee is 4 of 13. Jordan Bowden, who entered the night shooting 85.7 percent from the line, is 1 of 6 for the Volunteers.

Edwards entered this South Regional semifinal as the NCAA Tournament's active career leader with 153 points. He was coming off a 42-point effort against Villanova. Edwards missed a layup and two 3-pointers before making a layup and a 3 just 24 seconds apart to give Purdue an 18-13 lead.

Tennessee had only trailed by double digits in three other games, two of which were losses.

Josh Perkins stole the ball and made a three-point play in the final seconds of the first half, giving Gonzaga a 38-27 lead over Florida State at the break.

Perkins and Rui Hachimura lead the Bulldogs with 10 points apiece. Gonzaga started out 1 of 6 on 3-pointers but is now 5 of 13.

Florida State has nine turnovers and is 10 of 30 from the field. The Seminoles also had some foul issues. RaiQuan Gray, Mfiondu Kabengele and 7-foot-4 center Christ Koumadje each have two fouls.

Terance Mann has just two points on a pair of free throws for the Seminoles. Mann scored a game-high 18 points for Florida State in its regional semifinal victory over Gonzaga last season.

Purdue made its first four shots from the field and leads Tennessee 18-13 in their Sweet 16 matchup.

The Boilermakers didn't miss until Carsen Edwards, the Big Ten's scoring leader this season, had his layup blocked by Tennessee forward Grant Williams with 16:44 left in the first half.

The Volunteers have shot 5 of 13 to start the South Regional semifinal. Matt Harms, Purdue's 7-foot-3 center, has been bothering Tennessee with his length inside.

RaiQuan Gray will get his third straight start for Florida State in place of Phil Cofer, who is not with the team for its West regional semifinal game against Gonzaga following the death of his father on March 21.

The 6-foot-8 redshirt freshman scored 8 points in the Seminoles' first-round victory over Vermont and then had 11 points, including three 3-pointers, in the second round against Murray State. Gray is averaging 4.0 points on the season but is known more for his defense. He is tied for second on the team with 27 steals.

Senior guard David Nichols remains doubtful after sustaining an ankle injury during the first round against Vermont.

Oregon is the closest thing to a long shot left in the NCAA Tournament. And the 12th-seeded Ducks have made the Sweet 16 three out of the last four years.

Next up for Oregon is No. 1 seed Virginia. The teams will match up in Thursday night's last game.

No. 2 seed Tennessee faces third-seeded Purdue in the other matchup in Louisville, Kentucky, while Gonzaga-Florida State and Texas Tech-Michigan decide the finalists in the West Region in Anaheim, California.

Dana Altman's squad from Eugene, Oregon, is one of only two teams left in the tournament seeded outside the top four. The other, No. 5 seed Auburn, was a small favorite when it beat No. 4 seed Kansas in the second round.

Florida State (29-7) will be without senior Phil Cofer when it faces Gonzaga (32-3) at Honda Center in Anaheim, California.

Cofer learned after Florida State's first-round win over Vermont that his father, former NFL player Mike Cofer, had died after a long illness. The funeral is Saturday in Georgia.

Florida State coach Leonard Hamilton says: "Life sometimes gives you those types of curve balls that you've just got to learn how to adjust and deal with the best you can."

"Hindsight," he said, laughing, "I would have worn one since Day One."

Brooks caught an elbow to the mouth from Washington's Noah Dickerson in Sunday's 81-59 second-round win in Columbus, Ohio. One tooth was knocked out, another was chipped and his lip was cut. He missed the last 12 minutes of the first half to get stitched up and returned for the second half.

Brooks has started every game for the Tar Heels and averages 8 points and 5.7 rebounds. He's a big communicator on defense, but he said the injury didn't keep him from talking when he got back on the court.

"It wasn't very painful," he said. "As long as my mouth stop bleeding, I was OK."

How's it been to eat?

"It's been bothering me to eat, I'm not going to lie," said Brooks, adding that he has no food restrictions as his mouth heals.

Tennessee (31-5) and Purdue (25-9) have some familiarity with one another ahead of their Sweet 16 matchup.

The teams met in the Battle 4 Atlantis in November 2017, and Tennessee returned most of the team that beat Purdue 78-75 in overtime.

The Boilermakers have a bunch of new faces.

Tennessee's Grant Williams says that win was important for his team's season, but the Volunteers have to be prepared for the changed team playing Thursday night.