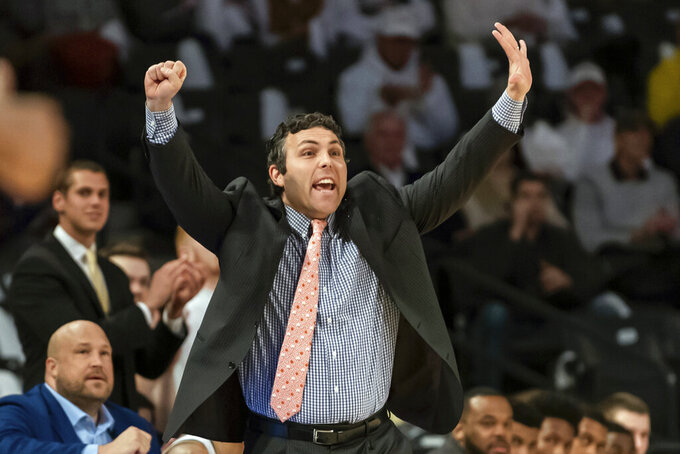 FILE - In this Jan. 25 2020, file photo, Georgia Tech head coach Josh Pastner calls a play in the first half of an NCAA college basketball game against North Carolina State, in Atlanta. The Gators open Nov. 25 against Maine at a resort casino on tribal land in Connecticut. They face No. 4 Virginia two days later and have early season road games scheduled against Oklahoma (Dec. 2) and 21st-ranked Florida State (Dec. 12).(AP Photo/Danny Karnik, File)

ATLANTA (AP) — More than a decade has passed since Georgia Tech last played in the NCAA Tournament.

No more excuses. It's time for that drought to end.

Coach Josh Pastner is going into his fifth season in Atlanta with an experienced team that posted its first winning mark in the Atlantic Coast Conference (11-9) since the 2003-04 season, when the Yellow Jackets reached the national championship game.

Senior swingman Jordan Usher guaranteed that Georgia Tech will make the NCAAs for the first time since 2010.

The Yellow Jackets caught a big break last season, when they were banned from postseason play because of recruiting violations.

Even though the season was halted and the NCAA Tournament called off because of the coronavirus pandemic, it was ruled that Georgia Tech had served its penalty by sitting out the ACC Tournament. A handful of games were played in that tourney before the shutdown.

“I guess that was a good thing for us,” senior guard Jose Alvarado said.

Now, to take advantage of it. The season is especially important for Pastner, who needs to show significant signs of progress after compiling a mediocre 65-67 record — 31-43 in the ACC — over his first four seasons.

An NCAA appearance is really the only way to demonstrate this long-dormant program is moving in the right direction.

“We have a big, big, big chip on our shoulder to make it," Alvarado said. “I think we have the team to do it.”

Usher is setting his sights even higher.

“We want to win the ACC," Usher said. “We don't want to be fighting just to get into the tournament. We want to be focused on seeding toward the end of the year."

Some things to watch with the Georgia Tech Yellow Jackets:

Much of Georgia Tech’s optimism centers on the backcourt duo of Alvarado and Michael Devoe.

Alvarado is a 6-foot senior point guard who sets the tone for the Yellow Jackets with his gritty persona. Last season, he averaged 14.4 points and career-high 4.0 assists.

Devoe, a 6-5 junior, led Georgia Tech with 16 points a game and earned second-team honors on The Associated Press All-ACC team.

Georgia Tech also has senior Bubba Parham, a valuable combo guard who can give the starters a breather or join them in a three-guard lineup.

“It's all about guard play,” Pastner said. “To win in college basketball, you've got to have great guard play.”

Pastner remains confident in a frontcourt group led by Moses Wright (13.0 points, 7.0 rebounds), Usher and Khalid Moore, though they are a bit undersized. Wright, at 6-9, is the tallest member of the trio.

Rodney Howard transferred to Georgia Tech from rival Georgia and was granted immediate eligibility by the NCAA.

The 6-10 forward played sparingly for the Bulldogs as a freshman, but the Yellow Jackets are hoping he will provide additional depth in the frontcourt.

Also keep an eye on transfer guard Kyle Sturdivant. He played in 21 games as a freshman at Southern Cal and will be able to suit up right away for the Yellow Jackets, giving Pastner another backcourt option.

The freshman class includes 7-1 Saba Gigiberia, a native of the country of Georgia. His skills as a passer and ability to play on the perimeter make him an intriguing possibility for minutes off the bench.

Georgia Tech will likely hold non-contact practices throughout the season in an attempt to avoid positive COVID-19 tests.

That presents some unique challenges for Pastner and his coaching staff, but having a veteran roster should make it easier to pull off.

“You need contact. Basketball is a contact sport. But the objective this season is to get to the game floor," Pastner said. "We may not be as sharp, but that's how you avoid getting shut down for 14 or 21 days.”

The coronavirus pandemic led to a change in scheduling philosophy for the Yellow Jackets, who wanted to stay as close to home as possible for most games.

Pastner had been reluctant to play other state schools except for Georgia, but this year’s schedule opens with a home game against Georgia State on Nov. 25, followed by another two nights later against Mercer. There also is a short road trip to Alabama-Birmingham on Dec. 23.

The 20-game ACC schedule opens on Dec. 15 when the Yellow Jackets travel to Florida State.