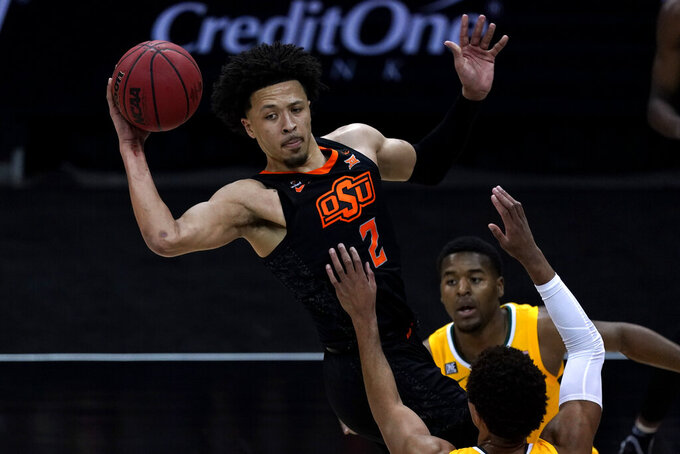 Oklahoma State's Cade Cunningham (2) passes over Baylor's MaCio Teague during the first half of an NCAA college basketball game in the semifinals of the Big 12 tournament in Kansas City, Mo., Friday, March 12, 2021. (AP Photo/Charlie Riedel)

INDIANAPOLIS (AP) — Baylor coach Scott Drew could sympathize with Kansas counterpart Bill Self when the Jayhawks had a positive COVID-19 test during the Big 12 Tournament, forcing them to withdraw and putting their NCAA Tournament hopes in limbo.

After all, the Bears went through their own pause this season. Twice.

They struggled mightily coming out of it, too, barely squeaking by Iowa State before Kansas dealt them their only regular-season loss. They still have not looked like the national title contender they were before the pauses.

“ My heart went out to them,” Drew said of the Jayhawks, “because I know how the players feel about that, and how tough it is on them, and I know the concerns the coaching staff will have to have with safety going forward.”

Then again, maybe coaches won't be quite as concerned.

All those pauses that 27 of the 68 teams in the NCAA Tournament went through during the season could end up benefitting them now that they've arrived in Indianapolis. Players, coaches and staff members who tested positive still have lingering antibodies, making them less susceptible to getting COVID-19 again — and potentially forcing their team to withdraw from the biggest tournament of their lives.

“While you can become reinfected with COVID, and it looks like new variants may be able to evade some of the immune response, reinfections are not that frequent,” said Dr. Tara Kirk Sell, a former Olympic swimmer and an assistant professor in the Department of Environmental Health and Engineering at Johns Hopkins. “I'd imagine players who have had COVID-19 are less likely to get it now.”

Nobody knows quite how effective antibodies are, nor how long they last. But recent research suggests someone who has recovered from COVID-19 has a measure of immunity for eight months, possibly longer.

That could be good news for nearly half the field, and especially good for Baylor, Florida State, Drexel, Grand Canyon, Iona and Norfolk State. Those six schools endured two pauses; the Gaels of coach Rick Pitino went 16 days during one and 51 days during the other, the longest that any team was inactive this season.

Those who got the virus felt lousy for days or weeks. When they came back, it often took several games for teams to get their legs — and lungs — back in shape.

Evan Miyakawa, a doctoral candidate in statistics at Baylor, broke down how teams fared this season when they emerged from pauses. He found an average drop in adjusted efficiency margin for teams following outbreaks was 0.016, which corresponds to a point-margin drop of 1.12 in a typical game.

Other teams, such as Iona, actually fared better coming out of pauses. But regardless of how they performed — better or worse — what they all have in common are the antibodies that those teams brought with them to the dance.

“We would hope if a group has been exposed and infected previous, their probability of experiencing an outbreak or several members being infected would be less,” said Dr. Dana Hawkinson, medical director of infection prevention and control at the University of Kansas Health System. “People who have been infected still have a possibility of being reinfected; we just hope they have less risk of disease, severe disease, death and transmitting the virus to others.”

That's why teams that have had COVID-19 still don't have freedom to run amok in Indianapolis.

Having had the disease might lower the amount of stress on some players and coaches, but every member of a team's travel party must still test daily. They remain confined largely to their hotel rooms, unless they are headed to practice or some other approved event. Masks remain ubiquitous, hand-washing pervasive.

“It's how the world is right now,” Oklahoma State forward Cade Cunningham said with a shrug. “We just try to take care of ourselves, test negative as many times as we can and stay positive, I guess.”

Even then, the virus can slip through the best-laid plans. That was the case when a referee tested positive early this week. He and five others who went out to dinner were sent home before the tournament even began.

“It’s not ever going to be perfect in a pandemic,” NCAA vice president Dan Gavitt said. “I don’t think there’s something that can be pinpointed as a kind of failure here. Just an unfortunate set of circumstances.”

Perhaps the COVID-19 pauses throughout the season will turn out to have delivered some measure of protection for March Madness.

“The whole season has given us pause, right? But you can only do so much,” Oklahoma State coach Mike Boynton said. “It is not like the virus is going to just disappear. You respect it, you try to be diligent but you can't really hide from it.”