An NCAA Tournament with empty arenas? It can't be ruled out 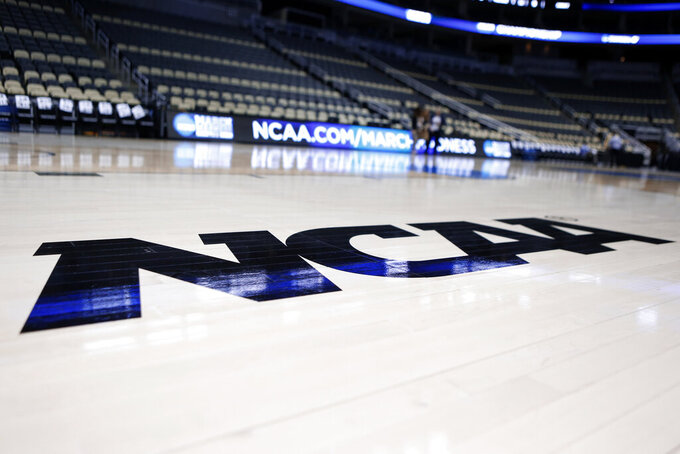 FILE - In this Wednesday, March 18, 2015 file photo, The NCAA logo is on the court as work continues at The Consol Energy Center in Pittsburgh. Imagine an NCAA Tournament with no fans in the arenas. What normally would be thought an impossibility isn't so far-fetched as the United States and the rest of the world attempt to contain the spread of the new coronavirus. (AP Photo/Keith Srakocic, File)

Imagine an NCAA Tournament with no fans in the arenas.

What normally would be thought an impossibility isn't so far-fetched as the United States and the rest of the world attempt to contain the spread of the new coronavirus.

An advocacy group for college athletes has urged the NCAA to consider holding its winter sports championships with no fans, and the idea has not been dismissed out of hand.

“If you can think of it, it’s something that we’ve gone through an analysis around,” NCAA Chief Operating Officer Donald Remy told Bloomberg News on Tuesday. ”We’ve contingency planned for all circumstances.”

The NCAA declined further comment to The Associated Press on the possibility of no fans in the stands. Presumably, the games still would be televised.

The virus has sickened more than 92,000 people and killed 3,100 worldwide, the vast majority of them in China. Nine people have died in the U.S., all in Washington state. Most cases have been mild.

Later Tuesday, the Stanford athletic department announced the school's emergency coronavirus task force has recommended postponing or adjusting events on campus between March 4 and April 15. Stanford said it plans to “limit the number of attendees at our competitions in order to allow for sufficient social distancing.”

Stanford's women's basketball team is ranked No. 7 in the AP poll and was listed by the NCAA on Monday as one of the 16 teams that would potentially host the first two rounds of the NCAA Tournament. The NCAA offers an early look at the possible top seeds in the tournament, known as a reveal.

Also Tuesday, the NCAA announced it has established an advisory panel of medical, public health and epidemiology experts and NCAA schools to address the virus, also known as COVID-19. NCAA Chief Medical Officer Dr. Brian Hainline will lead the group.

“The NCAA is committed to conducting its championships and events in a safe and responsible manner,” Remy said in a statement. “Today we are planning to conduct our championships as planned; however, we are evaluating the COVID-19 situation daily and will make decisions accordingly."

Hainline said the advisory group will make recommendations on competition based on evolving medical protocols established by the Centers for Disease Control, the National Institutes of Health and state and local authorities.

"We are in daily contact with the CDC and are advising leadership on the Association’s response to this outbreak,” he said.

The NCAA generates nearly $1 billion a year, most of it coming from the men's basketball tournament through media rights fees, corporate sponsorships and ticket sales.

The NCAA wrestling tournament is March 19-21 at U.S. Bank Stadium, the first time the event has been held in a football stadium. The tournament is expected to break the attendance record of 113,743, set in Cleveland in 2018.

Conference basketball tournaments are set to begin next week, and the Big East, Pac-12, Mountain West, West Coast and Western Athletic conferences said in statements to the AP that they are proceeding as if their tournaments will go on but monitoring the situation.

The WAC noted that if its tournament is not completed, the tournament's No. 1 seed will advance to the NCAA Tournament as the league's automatic qualifier.

Sporting events across the globe have been canceled or contested with no spectators allowed in stadiums or arenas.

Ramogi Huma, executive director of the National College Players Association, urged the NCAA and the schools to take steps to protect athletes.

“Precautions should include cancelling all auxiliary events that put players in contact with crowds such as meet and greets, and press events,” he said in a statement. "Athletic programs should also take every possible measure to sanitize buses and airplanes used to transport players.

“In regard to the NCAA’s March Madness Tournament and other athletic events, there should also be a serious discussion about holding competitions without an audience present. ... The NCAA and its colleges must act now, there is no time to waste.”

The Associated Press receives support for health and science coverage from the Howard Hughes Medical Institute’s Department of Science Education. The AP is solely responsible for all content.