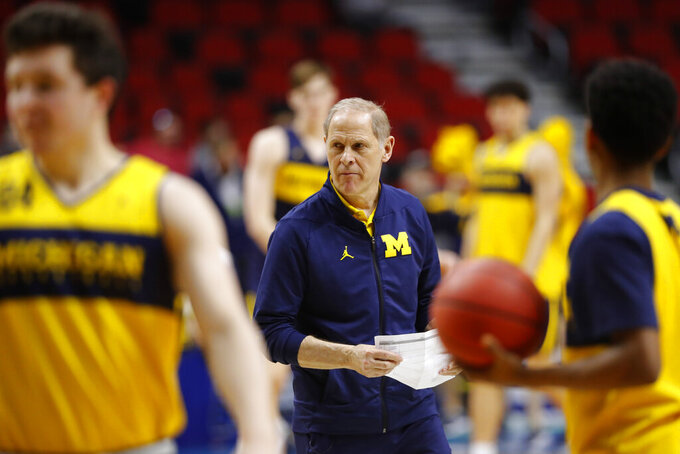 Reigning national champion Villanova will be in action along with Michigan, the runner-up from a year ago, while Belmont and Murray State open the NCAA Tournament as trendy upset picks.

There's Kansas and Michigan State to provide some blue-blood flavor, and Murray State's Ja Morant and Marquette counterpart Markus Howard some star power. There's the big-name coaches such as Syracuse's Jim Boeheim and the under-appreciated in Wofford's Mike Young.

What more could you want on the first real day of the dance?

Other than Zion Williamson, of course. Duke doesn't get started until Friday.

But there is still plenty of intrigue as the first round gets going Thursday in Des Moines, Iowa, with a matchup in the East Region between seventh-seeded Louisville and No. 10 seed Minnesota — the school coached by Richard Pitino , the son of disgraced Cardinals coach Rick Pitino.

The younger Pitino dismissed any notion that the NCAA Tournament selection committee made the matchup on purpose, perhaps to sell tickets or drive television ratings.

"I don't have a whole lot of opinion on it," Pitino said, "because when I'm sitting there Selection Sunday, I'm looking around, I'm excited about the fact that I know we're in the NCAA Tournament. I'll play whoever. I'm excited."

Michigan is coming off a tough loss to Michigan State in the Big Ten Tournament title game, but coach John Beilein put a positive spin on the showing in Chicago. He saw a team executing at a higher level, one that is hungry to break through and deliver a national championship.

"I've had a lot of wins and a whole lot of losses, and after a loss, every time there seems to be a bounce in our team," said Beilein, whose Michigan teams have twice lost in the national title game. "Hopefully we will have the same edge, right, that we have had in the last couple of years in the first rounds after winning. I think we will have more of an edge, hopefully."

Here are some other things to watch as the tournament hits its stride:

NOVA'S TITLE DEFENSE: Villanova certainly didn't look like an NCAA Tournament team when it lost a Final Four rematch to Kansas to fall to 8-4 early in the season. But veterans Phil Booth and Eric Paschall dragged the Wildcats along, and their late-season run produced a Big East Tournament title and earned them a No. 6 seed in the South Region.

Jay Wright's crew opens against No. 11 seed Saint Mary's in Hartford, Connecticut. The Gaels are coming off a 60-47 upset of Gonzaga in the West Coast Tournament title game.

LET'S PLAY HORSE: The best one-on-one matchup of the entire tournament could come Thursday when Howard and the fifth-seeded Golden Eagles face Morant and No. 12 seed Murray State. Howard was the Big East player of the year while most NBA mock drafts have Morant going in the top five.

Even better? Morant and Howard have been friends since attending Chris Paul's camp together.

"Markus actually was the first person I talked to," Morant said. "We had a meeting that night when we got there. I sat at the table with him and had conversations with him. The experience was great, just being there with Chris Paul and other NBA players."

MISLABELD MID-MAJORS: Nevada returned the Martin twins, Cody and Caleb, along with star forward Jordan Caroline from last year's Sweet 16 team. Together, they powered the Wolf Pack to a 29-4 record and share of the regular-season Mountain West crown. First up for them is Florida, which forces turnovers by the dozen and feature a resurgent Jalen Hudson .

Two other mid-majors that could make March noise are Wofford and New Mexico State. The No. 7 seed Terriers, winners of 20 straight, open against No. 10 seed Seton Hall in Jacksonville, Florida, and the No. 12 seed Aggies go for their 31st win against No. 5 seed Auburn in Salt Lake City.

TIGER TROUBLES: Third-seeded LSU still won't have coach Will Wade on the sideline because of his alleged role in a wiretap scandal when the Tigers face No. 14 seed Yale in Jacksonville. Tony Benford will be in charge against the Ivy League champions, who have one of the nation's most electric offenses.

"The players, they've taken ownership of the locker room. They're holding everyone accountable," Benford said. "They're aware of what's going on the outside, but inside when we walk in those doors, hey, it's about preparing for — for instance, Yale."

KU'S CHANCE: Once the nation's No. 1 team, Kansas is down to one last chance to win a title ring. The Jayhawks failed to win a piece of the Big 12 regular-season title for the first time in 15 years, then lost to Iowa State in the conference tournament final. The fourth-seeded team in the Midwest Region opens against Northeastern in Salt Lake City.

"Every team has a different ceiling and coaches know that better than anybody," Jayhawks coach Bill Self said. "Our kids have done a pretty good job operating against that ceiling for the most part. Not always, obviously. But I think I know what this team is capable of and I think we're capable of doing some great things in this tournament. That pride makes it more challenging and more fun but it doesn't make it any easier."