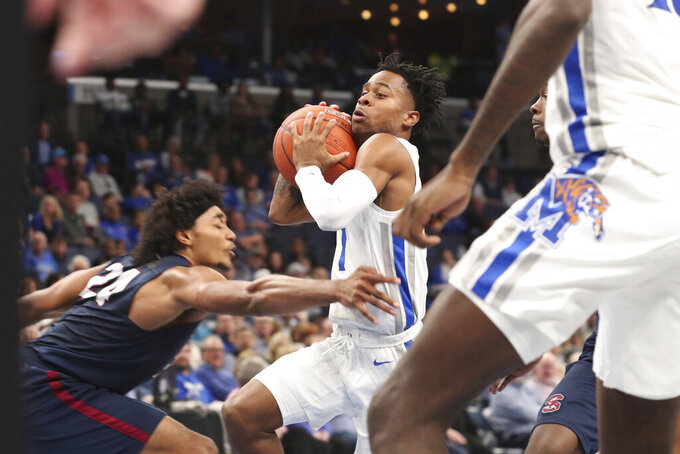 FILE - In this Nov. 5, 2019, file photo, Memphis' Tyler Harris (1) goes up for a basket as South Carolina State Ian Kinard (24) defends during the second half of an NCAA college basketball game in Memphis, Tenn. The NCAA has granted immediately eligibility to Iowa State guard Harris, who transferred from Memphis after last season. Iowa State announced Monday, Aug. 31, 2020, that Harris would be allowed to play this season. (AP Photo/Karen Pulfer Focht, File)

Iowa State announced Monday that Harris would be allowed to play this season. He averaged 9.9 points per game and made 138 3-pointers in two seasons with the Tigers.

“We are really excited for Tyler and his family that his waiver was approved,” coach Steve Prohm said. “Tyler will bring experience to our team and we look forward to having him out on the court with us this season.”

Harris has started 15 of 67 career games. He has scored 10 or more points 35 times, posting a career-high 25 in a win against Charleston as a freshman. Harris is a career 33% shooter on 3-pointers and 84% on free throws.