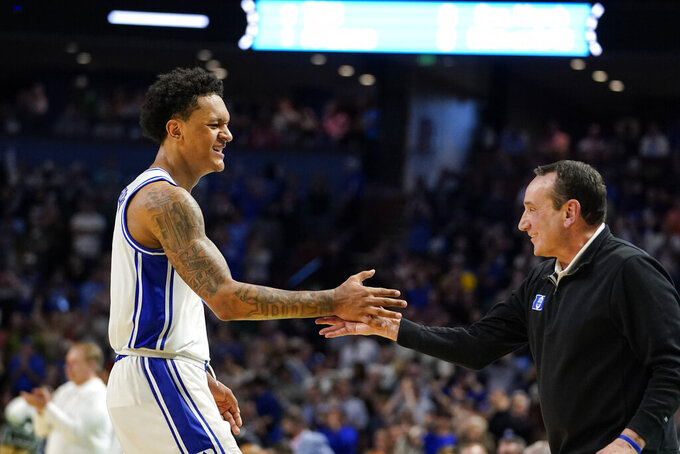 Mike Krzyzewski's farewell tour was thisclose to over.

Duke trailed Michigan State 70-65 with 5:10 left to play Sunday and there was next to nothing he could do about it.

“I’m an Army guy,” recalled Krzyzewski, who played for Bobby Knight at West Point and started his coaching career there. “But it looked like our ship was sinking.”

From the moment in June when Krzyzewski announced his 42nd season would be his last, it was bound to be all about him. And really, how could it be otherwise? Coaches have always been the enduring stars of the college game and no one since John Wooden lit up the firmament like Coach K.

Now imagine being a kid in a Blue Devils uniform and watching that light flicker.

“We can either lay down,” freshman Paolo Banchero recalled thinking, "or turn it up.”

Duke responded with a 20-6 run the rest of the way. The 6-foot-10 Banchero steamrolled Michigan State's Joey Hauser on a drive to the biggest bucket of the night for a 75-74 lead. Jeremy Roach followed with a 3-pointer to stretch the lead to four with 1:16 left. Krzyzewski won't officially become a spectator until this one last run through the NCAA Tournament ends with a loss, but he's already learning to enjoy the view.

“You guys were terrific, man,” Krzyzewski told the players sitting alongside him after Duke notched an 85-76 win over the Spartans to advance to the Sweet 16 and a matchup with Texas Tech. “I’m so — I’m really proud to be your coach."

Coach K has been hoarse since the tournament started, but he insisted on making a point. “It had nothing to do with coaching in those last four or five minutes," he said. "It all had to do with heart and togetherness."

That might be overstating the case, since talent is a more reliable measure of success than emotion. But not in every case.

Just ask 10th-seeded Miami, which handcuffed Auburn's Jabari Smith and Walker Kessler — both likely NBA lottery picks — en route to the day's biggest upset, a 79-61 beatdown of the No. 2 Tigers.

“It’s the first time that we got it handed to us,” Auburn coach Bruce Pearl said. “We didn’t know how to respond.”

Or for that matter, 11th-seeded Iowa State, which tipped No. 3 Wisconsin 54-49 in Milwaukee, just a fast hour's drive from the Badgers' campus in Madison. Wisconsin had Johnny Davis, the Big Ten player of the year, a hard-earned reputation for taking care of the ball — a nation-low average of 8.4 turnovers per game — and a frenzied crowd behind it.

But the Badgers ominously gave the ball away eight times in the first half alone and didn't shoot much better. Davis was 0 for 7 from 3-point range and his teammates weren't much better, just 2 for 15.

“Shot the ball uncharacteristically poor today. Turned the ball over. We’re No. 1 in the country in fewest turnovers. Today," coach Greg Gard summed up, "we were not.”

If it's any consolation, two more Big Ten teams joined the Badgers in heading for the exit.

Seventh-seeded Ohio State pulled within 60-58 of No. 2 Villanova with just under six minutes left and then went colder than cold. Instead of panicking, the Wildcats got two turnovers and cranked up the defense, pulling away to a 71-61 victory as the Buckeyes missed six of their final seven shots from the floor.

Coach Jay Wright has been quietly building a Coach K-caliber program, having won national championships in both 2016 and 2018. That kind of continuity pays dividends.

"This is what happens when you play great teams and it’s happened to you before, and you can fight through it. If you haven’t done it, it’s hard, you can panic,” Wright said. “But all these guys have been there.”

Houston, a Final Four team last season, should have been able to rely on experience. Instead, the fifth-seeded Cougars lost their two best players, guards Marcus Sasser and Tramon Mark, to season-ending injuries and were forced to retool with three transfers. But Taze Moore stepped up with 21 points and Jamal Shead added 18 in what turned out to be a comfortable 68-53 win Sunday over Illinois.

“We got a brand-new bunch,” Houston coach Kelvin Sampson said afterward. “But the culture never changes."

Kofi Cockburn, the Illini's All-American center, knows that feeling only too well. He passed up a shot at the NBA last year in search of some redemption. Instead, Illinois got bounced on the tournament's opening weekend for the second straight year.

“We always want to leave with with a good feeling, you know?" Cockburn said. "We fell short. Can’t really put it into words.”

This story has been corrected to show that Ohio State was seeded seventh, not second.