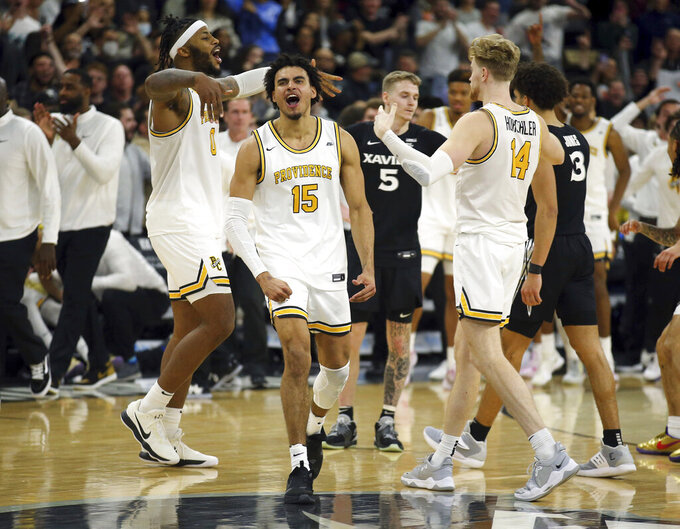 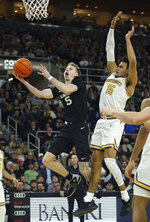 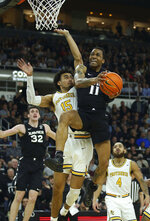 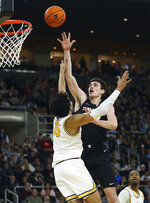 NEW YORK (AP) — By the time Justin Minaya hit his early teens, he knew the score.

Now he just needed to tell his father — and that made him nervous.

You see, Minaya's pop isn't any old Little League dad. Omar Minaya was the general manager of a New York Mets team that nearly reached the World Series. And before that, the first Hispanic GM in major league history with the Montreal Expos.

Safe to say, Justin grew up swinging a bat, running the bases and idolizing an All-Star shortstop on the Mets. Switching screens and sliding his feet as a lockdown defender for No. 11 Providence came much later.

Forever a scout at his core, Omar Minaya says Justin was a left-handed pitcher with a smooth delivery and late movement on the ball who could also track 'em down in center field.

But then he sprouted to about 6-foot-5 early in high school. And his mom's brother, James Albright — Uncle Jay to Justin — died freshman year.

In a family where baseball came first, Uncle Jay was a basketball junkie and rabid Kobe Bryant fan who taught Justin that game and instilled a second love.

“He was like, my guy,” Justin Minaya said. “He inspired me to play basketball."

Determined to live their dream of a major Division I career for Justin — and realizing his size and athletic skills were suited to hoops — the future small forward started playing competitive AAU ball and knew if he was going to get serious, he needed to drop baseball.

“To get to play at that level, you have to really train and work hard,” Omar Minaya said.

So it was time for a heart-to-heart with dad, who had a brief minor league career after being picked in the 14th round of the 1978 draft by the Oakland Athletics.

“I was kind of a little nervous to tell him at first, but he had no problem. And he kind of just changed and wanted me to reach my goals in basketball then," Justin Minaya said. “Once I saw his reaction, I was fine.”

And full support followed at home in New Jersey.

“Once I told him that was my dream, he sacrificed everything," Justin Minaya said. "Like if I wanted to go shoot late at night, he was coming to the gym with me, working out. Play at 5 in the morning, he would wake up, make sure I'm in the gym. He's just always been there for me, whether it's talking through conversation or it's in the gym just rebounding for me. So I really appreciate that from him.”

Needless to say, the young Minaya made a smart decision.

He played four solid years at South Carolina before switching this season to Providence, where he and fellow transfer Al Durham have blended seamlessly with the veteran group that returned.

“We knew an assistant coach at South Carolina. We saw his name in the portal. We did a lot of homework on him, we did a lot of calling around on him. And then when I did a Zoom with him, I fell in love with him. We needed another 6-6, 6-7 multidimensional player,” said Providence coach Ed Cooley, the Big East coach of the year. "We definitely went after him.

“It just worked. It all came to. He's one of the nicest, friendliest — he never has a bad day. Has a wonderful smile, he has a good spirit, he's an incredible teammate. Honestly, if you chiseled out a player that I ever want to recruit, he's someone that is a textbook Cooley recruit.”

A versatile starter who plays a lot of minutes and does a little of everything, the now 6-foot-7 Minaya often guards the opponent's top offensive player — sometimes regardless of position. He averaged 6.6 points and 5.7 rebounds in helping the Friars (24-4, 14-3) to their first Big East regular-season title after 43 years in the league — assuring Minaya is headed to his first NCAA Tournament.

Never was his value more evident than in Providence's 65-61 victory over Butler in the Big East quarterfinals Thursday, when Minaya made two huge blocks in the final minute to save the top-seeded Friars.

“We haven’t said his name enough. I feel like he’s the best defender in the Big East. I feel like he should be having national recognition,” Durham said. “He comes up big for us. He does the thing that doesn’t show up in the stat sheet.”

Minaya finished with a team-high eight rebounds, and Providence was plus-8 while he was on the floor.

“Honestly, he’s been a dream," Cooley said. "I mean, I feel like I’ve known him forever. His parents have been great. He’s self-motivated. He’s just been an absolute joy to coach. ... There’s no way we’re in the position we’re in without him on the roster. He has been a gem.”

Omar Minaya was in the stands, of course, watching Justin play his second career game at Madison Square Garden.

The move to Providence much closer to home has enabled not only Omar Minaya to attend many of Justin's games this season, but also other family members and friends including his mother, Rachel, and brother, Teddy.

“He wanted to experience the Big East,” Omar Minaya said. “As a family, we're happy that he chose Providence.”

The 63-year-old Minaya, who also was a senior vice president of baseball operations and interim general manager for the San Diego Padres, was hired last month by Major League Baseball as a consultant for amateur scouting.

Justin Minaya said he misses baseball and acknowledged there were times in high school when he wished he was still playing.

But for now, those summer games of catch in the front yard with his proud dad will do.

“I'm so glad he chose basketball,” Cooley said with a laugh.