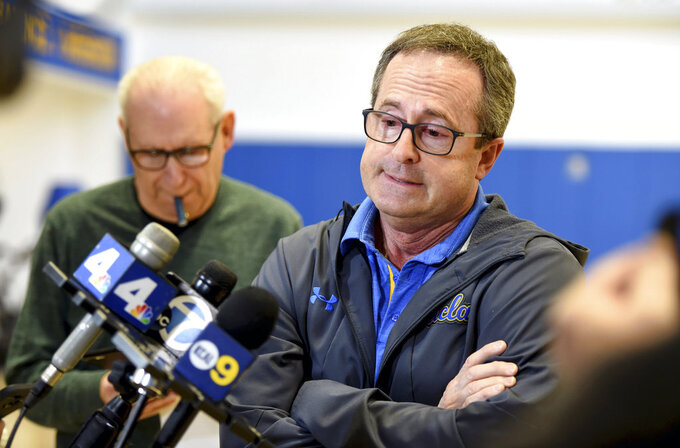 LOS ANGELES (AP) — The memories are all around UCLA's campus for Murry Bartow. The thrill of a Final Four, cheering crowds inside Pauley Pavilion, hanging around with John Wooden.

Over 40 years after his father Gene Bartow roamed the sidelines, the younger Bartow has been entrusted with salvaging the season for the Bruins in the wake of coach Steve Alford's abrupt firing.

Bartow will work under the interim tag while the search for a permanent coach begins. The 57-year-old Bartow finds himself on familiar turf during a turbulent time at UCLA.

He was a teenage ball boy while his father coached the Bruins for two seasons in the mid-'70s. Gene Bartow had a 52-9 record as Wooden's successor, reaching the Final Four in 1976 and the second round of the NCAA Tournament the following year.

Gene Bartow's winning percentage of .852 is second-highest in UCLA history, ahead of Wooden's .808. He left the pressure-cooker environment in 1977 to create Alabama-Birmingham's athletic department.

"My dad had some really great memories and maybe some that weren't as great," Bartow said.

UCLA supporters angered and frustrated during the Alford era can't dispute the younger Bartow's bona fides. Besides being a ball boy, he rounded out golfing threesomes with his father and Wooden.

"Coach Wooden was incredible to my dad," Bartow said. "He was around my dad a lot and did a lot of great things."

He has a 328-264 record during 19 seasons as head coach at UAB, East Tennessee State and South Florida. His teams made the NCAA Tournament four times but never advanced past the first round.

"This has zero to do about me," he said. "It's about the players now. It's three months of going as hard as we can go trying to pour everything we've got into the players."

The Bruins (7-6) head into their Pac-12 opener against Stanford on Thursday mired in a four-game skid that includes home losses to Belmont and Liberty.

"We have an optimistic vibe. Everybody is aware that we're still a talented basketball team," guard Prince Ali said. "The Pac-12 is wide open and we think we have a good shot at doing something if we continue to work hard."

Talent was rarely an issue during Alford's tenure. He recruited several top-notch players and reloaded when several of them left early for the NBA. Execution was another story.

"Fundamentally, we've got to do some things better. I don't think it was the stuff that we were running," Bartow said. "It's all sound things that we're running but we've obviously got to dribble it better, pass it better, make better decisions, make free throws."

Bartow brings a reputation as a tireless worker who jots his thoughts in an ever-present notebook.

"Nobody knows what he writes on it," Ali said.

He's determined to write the best ending possible on a season that began with the Bruins ranked in the Top 25 only to drop out after early losses to Michigan State and North Carolina.

"Of course we can still make the NCAA Tournament," Bartow said, fully aware of the ultimate expectation for every UCLA team, "but we've got to get better."

Bartow came to Westwood from South Florida, where he took over as interim coach midway through the 2016-17 season after Orlando Antigua was fired. The team went 1-16 after he took over.

Alford dipped into his past when he hired Bartow last April after assistant David Grace was fired. Bartow was a graduate assistant at Indiana under Bob Knight when Alford starred on the Hoosiers' 1987 national championship team.

"Steve and I have been great friends for 30 years," Bartow said. "Great guy, very good coach, incredible person, he's been a heck of a basketball coach for a lot of years. I'm standing here with obviously a heavy heart because of that, but what we're going to do now is move on."

Alford said goodbye to the team on Monday at its practice facility.

"I was surprised, shocked," said Ali, who first heard the rumors on social media.

"I didn't feel it coming, expect it coming," he said. "I was caught off-guard a little bit."

Guard Kris Wilkes was recruited by Alford out of Indianapolis.

"He was a big part of the reason I came out here," he said. "It's definitely tough to see him go but I guess that's just how the business goes."

Bartow will run the team along with associate head coach Duane Broussard and second-year assistant Tyus Edney. Kory Barnett has moved up to become the third assistant from director of operations, while Kory Alford will stay on as video coordinator.

"He wants to be here," Bartow said of Alford, the oldest son of Steve Alford who played for his father and is in his second season on the staff. "He's got an incredible future in the game."

Asked about his interest in the permanent job, Bartow said, "I'm not looking at that at all. I'm about the players. I'm about the next three months. I want to get better today. I've got zero concern about that right now."