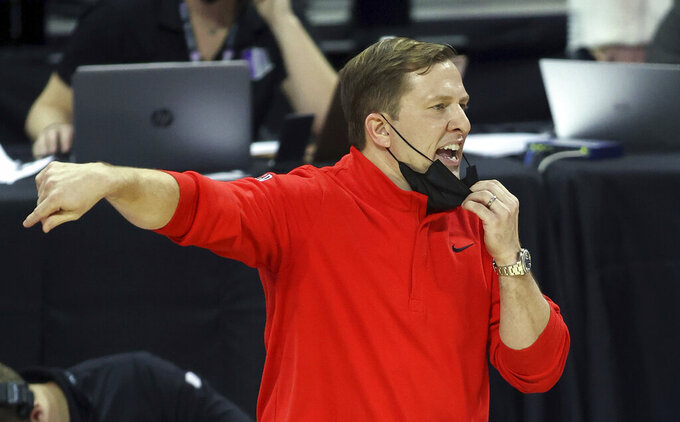 UNLV coach T.J. Otzelberger gestures during the second half of the team's NCAA college basketball game against Air Force in the first round of the Mountain West Conference men's tournament Wednesday, March 10, 2021, in Las Vegas. (AP Photo/Isaac Brekken)

Terms were still being worked out, Pollard said, but the deal will be structured creatively to account for the athletic department's financial problems stemming from the pandemic.

“T.J.'s passion for wanting to be here outweighs him saying this is just about money and ‘I need to make whatever I can make,’” Pollard said. “The actual contract will probably take some time to work our way through it.”

Otzelberger was earning $1.2 million in the second year of his five-year contract at UNLV.

“Having T.J.'s willingness to have a contract that has a base salary with incentives that clearly will reward him if we're successful, but at the same time, allows us to essentially pay ourselves back because we have to put in a considerable amount of money here in the short term just to make the change," Pollard said.

The 43-year-old Otzelberger had two stints as an Iowa State assistant before taking head coaching jobs at South Dakota State and UNLV. He returns to take over a program that went 2-22 and was winless in the Big 12.

Iowa State was the second-lowest scoring team in the Big 12 (65.6 ppg) and allowed the most points per game (76.7). Otzelberger promised a team that would play with high intensity on both ends of the court.

Otzelberger's last two teams at South Dakota State finished in the top seven nationally in scoring offense. His two teams at UNLV were middle-of-the-pack in offense and defense.

Otzelberger has a strong reputation as a recruiter, and he said he didn't know how hard he'll scour the transfer portal for players.