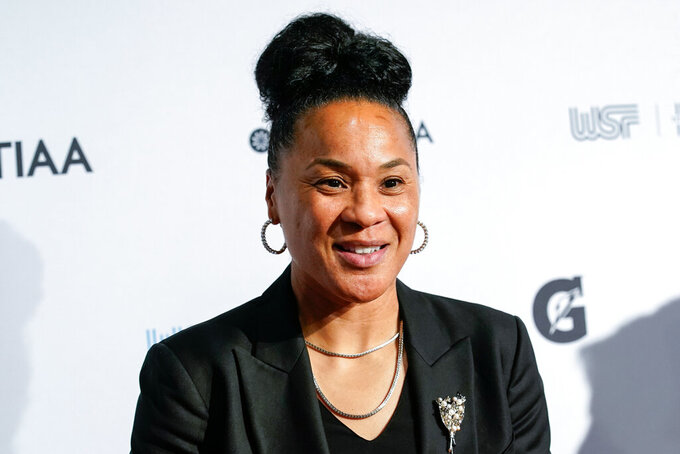 COLUMBIA, S.C. (AP) — First-year coach Lamont Paris didn't have to go far to find a welcome and willing resource on how to go about building a championship program at South Carolina: Gamecocks' women's coach Dawn Staley.

Paris, who spent the past five seasons coaching Chattanooga, has had several chats with Staley since taking the men's basketball job this past March, not lon before Staley and her team won the national title.

Paris wanted to know Staley's process of taking the women's team from the “outhouse to the penthouse" after her arrival before the 2008-09 season. Staley's early teams struggled to make a dent in the Southeastern Conference. She didn't make an NCAA Tournament until her fourth season, the first of 10 consecutive trips including winning it all in 2017 and last season.

Paris said he asked “how important the community was in supporting her and getting some local players even.”

Staley's a great example there, too. South Carolina has led in women's basketball home attendance the past seven season, including attracting 12,431 fans per game in 2021-22. She's signed hometown standouts like WNBA champion A'ja Wilson, who has a statue outside the Gamecocks arena, and has another in five-star freshman Ashlyn Watkins of Columbia.

Jackson should lure plenty of area fans to Colonial Life Arena, where the men have often been an afterthought in an 18,000-seat arena where their crowds often don't approach what the women draw.

Paris knows he's got a tough enough job melding a roster where eight players, including four starters, departed after Frank Martin was fired.

Paris lured five transfers, including Meechie Johnson from Ohio State and Benjamin Bosmans-Verdonk of Illinois this season. The Big Ten newcomers are no surprise since Paris was a longtime assistant at Wisconsin under Bo Ryan before moving to Chattanooga.

Jackson said the team is coming together in practices and is confident they'll be competitive this season.

Anyone who watched practice, Jackson said, would think, “'Oh, yeah, this team (has) got something nice.'”

G.G. Jackson, considered by some recruiting service as the No. 1 prospect for the 2023 cycle, was leaning toward South Carolina when Martin was coach. After the change to Lamont Paris, Jackson committed to North Carolina. But he and his family met and liked Paris so much that the 17-year-old Jackson reclassified and enrolled to play this winter.

“I'm still trying to adjust to the college life a little bit, but it's not something I can't deal with,” Jackson said.

South Carolina bounced back from a 6-15 season in 2020-21 to go 18-13 last year. But the school and some fans had grown dissatisfied that Martin's teams, aside from a remarkable run to the Final Four in 2017, had missed the NCAAs in nine of his 10 seasons. Paris took over after five seasons with Chattanooga, where he led the Mocs to the NCAA Tournament last March.

There are just six returners from last season and only Jacobi Wright and Chico Carter Jr. started. In all, eight players who made 143 starts last season had exhausted their eligibility or did not return. Paris will lean heavily on his transfers. Hayden Brown averaged 18.8 points a game for The Citadel a year ago and will be looked at to add scoring punch this season.