Next Big Ten Showdown: No. 2 Michigan vs. No. 4 Illinois 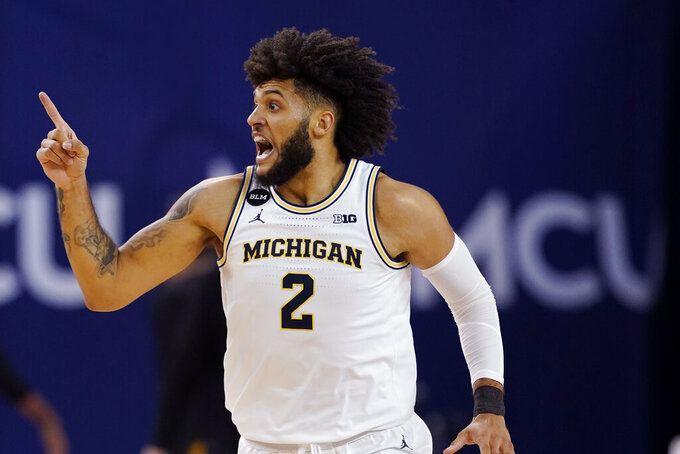 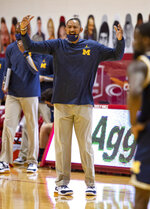 Michigan, of course, had a similar stretch without a game earlier this season, and the Wolverines barely missed a beat.

“It's very, very, very, very impressive — and I don't think I put that in perspective until the other night when I watched Baylor in the Kansas game," Underwood said. “Michigan's been great, and I think it shows their commitment and their veteran leadership.”

The second-ranked Wolverines host fourth-ranked Illinois on Tuesday night in the next marquee matchup of this Big Ten season. The conference had three teams in the top five and four in the top seven in Monday's AP Top 25 poll, and now it's finally time for Michigan and Illinois — the top two teams in the standings — to meet.

They were supposed to play Feb. 11, but the Michigan athletic department began a coronavirus-related pause during the latter half of January, and the Wolverines missed five games.

Since that break, Michigan is 5-0, including a win over then-No. 4 Ohio State and a 22-point blowout against an Iowa team that is now No. 5.

The Wolverines (18-1, 13-1) are making up two of the games they missed, so they're in the middle of a stretch of five games in 11 days to close the regular season.

“I’m trying to do the best I can as far as preserving their energy, with all this quick turnaround, and not wearing them down in practice," Michigan coach Juwan Howard said. "I’ve been impressed in how they’ve responded.”

After routing Iowa on Thursday night, Michigan had to return for an afternoon game at Indiana on Saturday. The Wolverines won that one by 16.

“We’ve got to now focus on the recovery," forward Isaiah Livers said. "Guys still got to get their homework done, focus on their scout and film. It’s kind of less physical, hands-on stuff.”

Michigan is now scheduled to play 17 Big Ten games during the regular season. Illinois (18-6, 14-4) is on track to play the full 20. If the league uses winning percentage in conference games to determine the regular-season championship, Michigan would clinch that with a victory in any of its final three games, assuming no more makeup games are added.

But there's been no definitive announcement from the Big Ten on whether that is indeed the process, and the league hasn't responded to requests for clarity from The Associated Press. Underwood acknowledged Monday that Michigan is “in a really good position" to be the top seed in the conference tournament, but even he didn't seem totally certain about whether winning percentage would determine that seeding.

“I don't know that exactly,” Underwood said. “We met as a head coaches group a couple of weeks ago just to discuss the move, but to get into specifics ... it's going to take somebody a lot smarter than me to figure that out and understand what that formula's going to be.”

Tuesday will be the fourth game in eight days for Illinois. After winning at Wisconsin on Saturday, Underwood said of the grueling schedule: “We're going to honor those games, and we're not going to be the teams that pick and choose what we play.”

Asked Monday if that was directed at Michigan, he said no.

“There's nothing to it. It's a league that's not playing 20 games, and that's all there is out there," Underwood said. "I've got all the respect in the world — they've won all their games but one that's been presented to them. I think it's just a very unusual year."

Underwood said Illinois star Ayo Dosunmu is day to day. He's missed the past two games after breaking his nose in a loss at Michigan State last Tuesday.

If he's out of the lineup, a tough task against Michigan figures to become even harder.