Next up: UCLA gets chance to stop undefeated Gonzaga 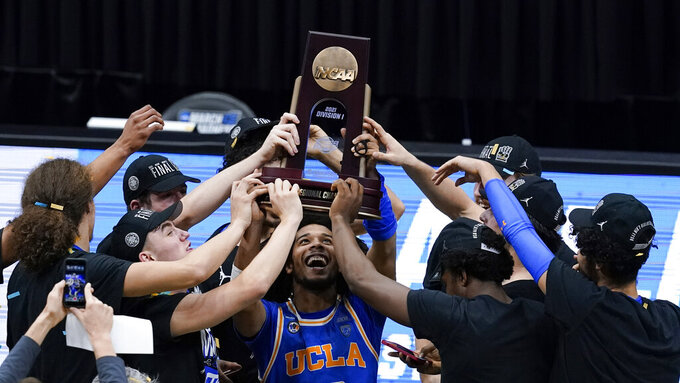 INDIANAPOLIS (AP) — Next up on the long list of wannabes eager to stop, or even slow, the undefeated Gonzaga Bulldogs is a team basketball fans might have heard of: UCLA.

In a strange twist that typifies a strange year, the legacy program with more national championships than anyone is a plucky up-and-comer this time around. The Bruins are listed as the biggest underdog at the Final Four in 25 years — 14 points — as they head into Saturday night's game.

And tiny Gonzaga — enrollment 7,300 with a dozen or so very talented basketball players sprinkled among them — is the behemoth nobody can seem to touch.

UCLA is the fifth 11th seed to reach the Final Four, and joins the 2011 VCU squad as the second to get this far after starting in the First Four, the preliminary round the NCAA added when it expanded the bracket to 68 teams a decade ago.

Heading into Selection Sunday, the Bruins (22-9) were viewed as slightly better than a bubble team, but the First Four placement identified them as one of the last four teams in. That placed a chip on their shoulders, but with Gonzaga (30-0) looming, this is no time for outside motivation, according to coach Mick Cronin.

“I give them pointers and try to be honest and tell them how hard it's going to be because of who we're playing,” said Cronin, who has led UCLA within two wins of the program's 12th national title. “I'm not the false-motivation guy, because none of that is going to help you when you're trying to stop Jalen Suggs in transition.”

Suggs, a freshman who will likely go in the NBA lottery if he leaves after one season, is one cog on a team with the nation’s best offense (91.6 points per game), the nation's best shooting percentage (54.8) and the nation's most impressive margin of victory (23.1). The Zags have won 29 of their first 30 games by double digits.

The winner advances to Monday's final to face the winner of the Houston-Baylor semifinal.

Gonzaga is two wins away from becoming the first undefeated team since 1976, when Indiana did it en route to the national championship. If the pressure of making history is weighing down the Zags, coach Mark Few certainly can't detect it.

“What you see is real,” he said. “They don't seem the least bit burdened by it.”

Going undefeated has not been a topic of conversation among the coaches or players.

REMIND YOU OF ANYONE?

Cronin said Suggs reminds him of a player he used to prepare for when he was an assistant at Louisville, and had to go up against Marquette.

“They had a guy named Dwyane Wade,” the coach said. “His explosive nature, and with that size, I don't know that I'd ever seen that and I haven't seen it since.”

Then, asked if there was a team the Bulldogs reminded him of, Cronin went with: “What jumps out on film is, they remind me of pro teams who won titles like the Spurs or the Warriors. Great teams who pass the ball to each other."

Though the '76 Hoosiers are the last team to complete an undefeated season, the UCLA program has plenty of history in that category. Four of the seven teams that have gone undefeated and won the national title came from the UCLA dynasty of the John Wooden era. His teams in 1964, ‘67, ’72 and ‘73 all ran the table.

The last two teams in that batch were part of UCLA’s still-record 88-game winning streak. Gonzaga's current streak stands at 34 straight wins, dating to the last four games before the 2019-20 season was halted by COVID-19.

Cronin has watched the tape of the last meeting between BYU and Gonzaga twice now — first when the Bruins were preparing for BYU in the first weekend, and again now that they're getting ready for Gonzaga. BYU led that game, in the West Coast Conference final, by double-digits in the first half, but ended up falling 88-78.

Any lessons to be taken from how the Cougars played the Bulldogs?

“They took care of the ball and scored and executed in the half court, and that gave them a chance to set up their defense,” Cronin said. “But we don't have a 7-3 center (Matt Haarms is BYU's center), and obviously, we can't run BYU's offense.”

Gonzaga forward Drew Timme, whose handlebar mustache has become one of the biggest stars of March Madness, appeared at Friday's Zoom interview with his beard fully grown out. He offered no hint as to what will show up when the Zags hit the floor Saturday night.