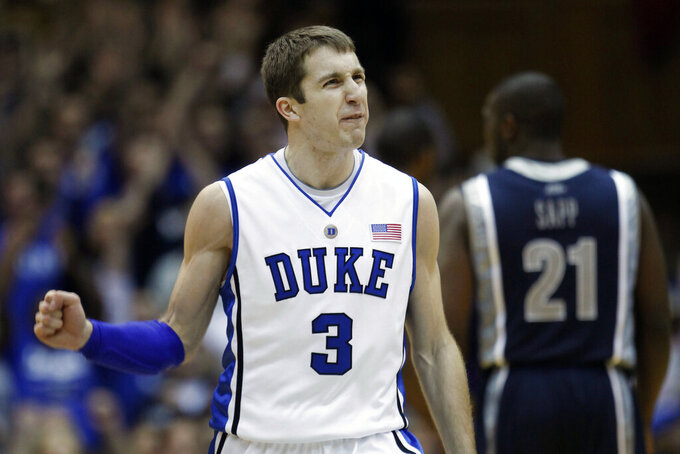 FILE - This is a Jan. 17, 2009, file photo showing Duke's Greg Paulus (3) reacting after a basket against Georgetown during the second half of an NCAA college basketball game in Durham, N.C. Niagara has removed the interim tag and named Greg Paulus the head coach of the men's basketball team. The promotion was announced Thursday, Nov. 7, 2019, two weeks after Paulus was elevated from assistant to interim coach after Patrick Beilein suddenly resigned for personal reasons. (AP Photo/Gerry Broome, FIle)

Paulus has confidence knowing he can lean upon the vast experience he gained as a player and draw from a high-profile network of mentors to guide him. The 33-year-old laughed when asked how often he hears Duke coach Mike Krzyzewski's voice in his ear, before responding: "All the time."

And he sure sounded like Coach K when placing the emphasis on his players as opposed to himself in the midst of a tumultuous two weeks that began with Patrick Beilein's abrupt resignation and culminated Thursday, when Paulus made the jump from assistant to head coach by signing a mulityear contract.

"I haven't thought about that," Paulus said, referring to coaching his first game. "It's not about me, it's about our program and them (the players)."

Paulus was a three-year starter and two-time captain at Duke from 2005-09, and was a member of three ACC championship teams. He completed his college career by switching to football to play quarterback at Syracuse before returning to basketball as an assistant coach, where his stops included George Washington, Louisville, Ohio State and Navy.

He arrived at Niagara in May upon being hired as an assistant and recruiting coordinator on Beilein's first staff.

School officials, citing Beilein's request for privacy, have not divulged any details behind his resignation. The 36-year-old Beilein has not commented since issuing a statement announcing his departure.

"Personal reasons I can no longer take lightly have led me to step away from my dream job," Beilein said. "Going forward, I must give singular focus to dealing with these issues, so that I can become the man that I strive to be."

Beilein then left to be with his family in Cleveland, where his father and longtime basketball coach, John Beilein, is in his first year coaching the NBA's Cavaliers.

Paulus may not have been the school's first choice to reignite a once-proud Metro Atlantic Athletic Conference program that went 64-129 and failed to advance past the conference tournament quarterfinals during six seasons under Chris Casey. Paulus, ultimately, became the logical choice to take over after being elevated to interim coach.

Athletic director Simon Gray said he spent the past two weeks evaluating Paulus to see if he was capable of landing the job on a more permanent basis.

"No guarantee, but we worked under the premise that we liked Greg a lot. We were very confident in him. But let's make sure we do our process of evaluating him to be our head coach," Gray said. "And it became clear that he is head-coaching material right now."

Paulus' stops included working under Thad Matta at Ohio State. He also gained experience in dealing with programs in flux.

In September 2017, Paulus was hired as assistant coach at Louisville after David Padgett took over as acting head coach following a federal corruption investigation and a sex scandal, which eventually led to Rick Pitino being fired.

Paulus described his one year at Louisville as a beneficial experience, and added he has consulted Padgett for advice.

For now, Paulus' primary focus is getting the Purple Eagles ready for an opening schedule that features three games in six days.

"I think it's important for us to just understand where we are," Paulus said. "And for us, it's trying to create an identity, trying to create a foundation, working together so we can build our program moving forward."