No. 1 Auburn looks to keep rolling at Georgia in SEC play 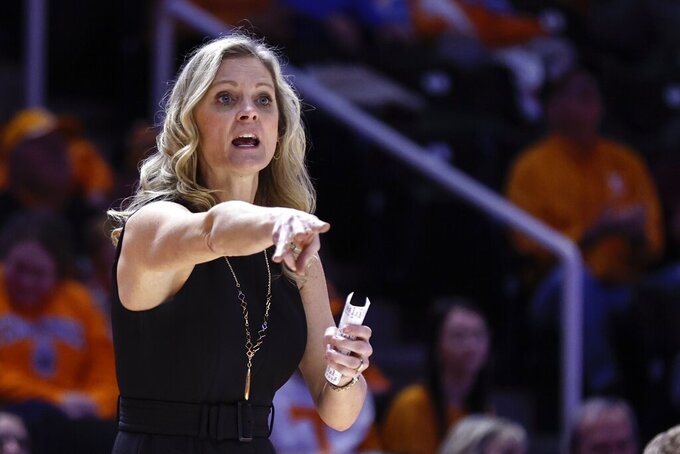 Tennessee head coach Kellie Harper yells to her players during the second half of an NCAA college basketball game against Arkansas Monday, Jan. 31, 2022, in Knoxville, Tenn. Tennessee won 86-83 in overtime. (AP Photo/Wade Payne)

No. 1 Auburn (21-1, 9-0 Southeastern Conference) visits struggling Georgia (6-15, 1-7) on Saturday in an SEC schedule with the league's four ranked teams facing unranked opponents on the road. The Tigers game with the Bulldogs seems like the biggest mismatch of the weekend. Auburn has won 18 straight. including its first nine in SEC play. That includes an 83-60 victory over Georgia at home last month. Auburn's roll this season has been “righteous," coach Bruce Pearl said after his team's latest win, a 100-84 drubbing of state rival Auburn this past Monday. And the scary thing for the rest of the SEC — Pearl says the Tigers are getting better. Jabari Smith is a 6-foot-10 freshman from Fayetteville, Georgia, about 90 miles Southwest of the Bulldogs' campus who has led Auburn with 15.6 points a game this season. He's backed up by Walker Kessler, a 7-1 transfer from North Carolina who became the second Auburn player with 90-or-more blocks in a season. Meanwhile, Georgia is bumping through a 6-15 season and has opened SEC play losing seven of its first eight. It would be a monumental surprise if the Bulldogs kept it close enough to have a chance at the end.

JD Notae, Arkansas. The SEC's leading scorer has averaged nearly 19 points a game this season for the Razorbacks. Arkansas has won its past seven games after opening SEC play 0-2. Notae is a big reason for the turnaround. The senior, who spent his first two seasons with Jacksonville, is having a career year in scoring and has averaged more than two steals a game this season.

Vanderbilt was off to its best start through 20 games since the 2015-16 season and went into February with the first winning record in Jerry Stackhouse’s three seasons as head coach. The Commodores started the month with a stumble, falling 77-70 to No. 5 Kentucky on Wednesday night. They'll host 25th-ranked LSU on Saturday.

Kentucky forward Keion Brooks Jr. averaged 19.5 points and seven rebounds in wins over Mississippi State and then-fifth-ranked Kansas to win SEC player of the week. ... All five of No. 22 Tennessee's starters finished with double-figure points in a 90-80 win over Texas A&M. ... SEC teams won six of the 10 games with teams from the Big 12 to win the yearly conference challenge last weekend. It's the second straight challenge triumph for the SEC. ... Kentucky forward Oscar Tshiebwe has had 15 games with double-figure points and rebounds, six of them in SEC play. ... Four SEC teams rank in the Top 15 of the NCAA’s NET rankings, the most of any conference.

It won't count in the league standings, only the perception of how far No. 7 Tennessee has come under third-year coach Kellie Harper. The Lady Vols travel to No. 10 UConn on Sunday. The Huskies have won the past two meetings since the series was revived in 2020. ... Top-ranked South Carolina has the weekend off, although games at Kentucky and at No. 14 Georgia are looming in the week ahead.