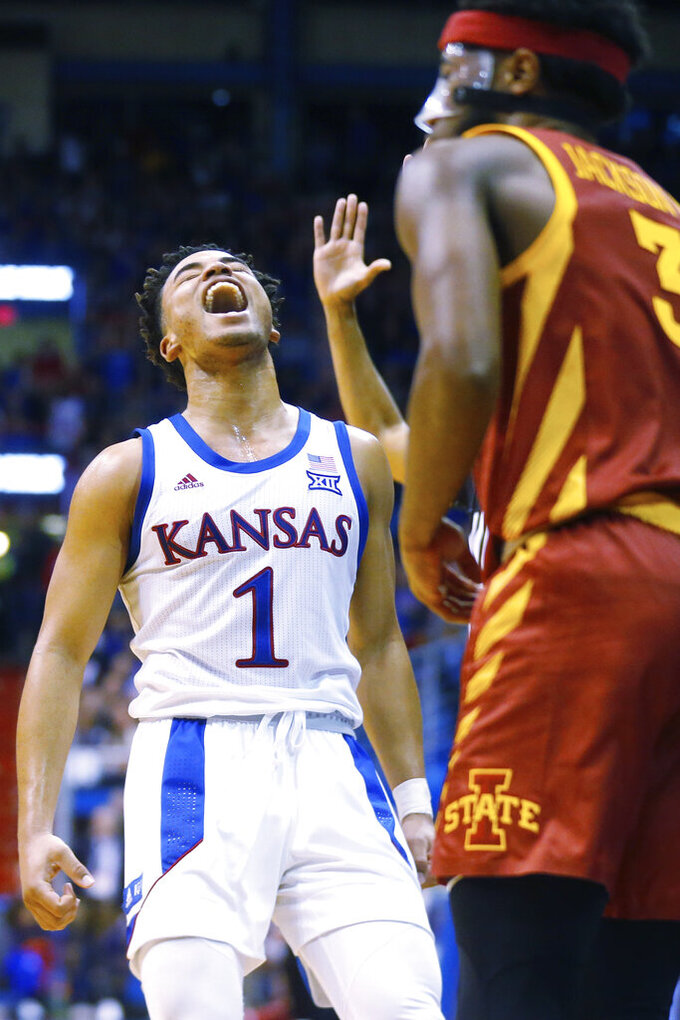 The biggest game of the weekend in the Big 12 is arguably the biggest game in college basketball so far this season: No. 1 Baylor against third-ranked Kansas. The Bears (24-1, 13-0) have a game on the Jayhawks (23-3, 12-1) by virtue of their win at Allen Fieldhouse in mid-January, but both teams have continued to roll. Baylor has pieced together the longest win streak in conference history at 23 consecutive games dating to Nov. 15, 2019, despite playing the last couple of games without second-leading scorer MaCio Teague. The Big 12 record had been held by the Jayhawks since they won 22 in a row during the 1996 and ‘97 seasons. The Bears’ start to the conference is also tied for the second-best in Big 12 history behind only the Kansas team in 2001-02 that won all 16 games. The Bears can deal a crippling blow to the Jayhawks' Big 12 title hopes by holding serve at home, while Kansas can potentially leap Baylor for the No. 1 overall seed in the NCAA Tournament by drawing even in the conference with four games to go.

Baylor guard Jared Butler and Kansas counterpart Devon Dotson. Fans were deprived of the one-on-one showcase between two of the Big 12's best guards in January when Dotson sustained a hip pointer before halftime and hardly played in the second half. He continues to lead the Big 12 in scoring at 18.4 points per game while Butler is fifth at just over 15.5. Whomever controls the game Saturday could decide which team wins in Waco.

The Big 12 has the top three defensive teams in the nation in West Virginia, Kansas and Baylor, according to KenPom.com, while Texas Tech ranks 10th. No other league has more than two teams in the top 10. ... Home teams have won nine of the last 10 league games. ... Kansas and Baylor are a combined 13-0 on the road in the Big 12. The rest of the conference is 8-44 away from home. ... Baylor's streak of 23 wins is second nationally behind San Diego State (26). ... Kansas won its 800th game in Allen Fieldhouse on Monday night by beating Iowa State. ... West Virginia coach Bob Huggins tied Dean Smith for sixth in NCAA history with 879 wins. North Carolina's Roy Williams is two ahead with 881. ... Texas guard Andrew Jones (21) and center Will Baker (20) had career-high scoring nights in a win over TCU.

Second-ranked Baylor (24-1, 13-0) tries to remain perfect in Big 12 play Saturday against Oklahoma. The Lady Bears have a quick turnaround against West Virginia on Monday night. ... Baylor coach Kim Mulkey became the fastest Division I coach to reach 600 wins when the Lady Bears beat Texas Tech last week. ... Kansas beat Texas last Sunday for its first win over the Longhorns since Jan. 23, 2013. ... Peyton Williams had a career-high 31 points and 19 rebounds to help Kansas State rally in the fourth quarter for an overtime win at Oklahoma. ... The Sooners' Taylor Robertson broke the single-season school record with her 116th 3-pointer against the Wildcats. She finished with 27 points in the game.