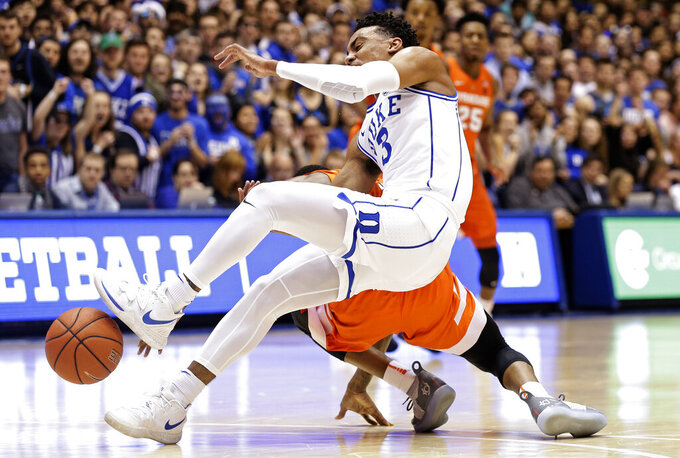 Duke's Tre Jones (3) collides with Syracuse's Frank Howard during the first half of an NCAA college basketball game in Durham, N.C., Monday, Jan. 14, 2019. Jones was injured on the play and left the court. (AP Photo/Gerry Broome)

In that type of injury, the collar bone is separated from the shoulder blade.

Jones did not return after he collided with Howard while chasing a loose ball with 14:23 left in the first half. Howard picked up his third foul on the play — Jones' fourth steal of the game.

Jones, the younger brother of former Duke and current Minnesota Timberwolves guard Tyus Jones, has an assist-to-turnover ratio of 5.93 that is nearly twice that of any other player in the Atlantic Coast Conference.

He was replaced by sophomore Jordan Goldwire, with freshman forward RJ Barrett also helping out on defense against the Orange's point guards.

The Blue Devils were already down one starter when Cameron Reddish was held out with flu-like symptoms. They did have freshman sensation Zion Williamson, who was in the starting lineup two days after he was poked in the eye in the first half of a victory at Florida State.