No. 1 Gonzaga blows out Pepperdine 100-74 in WCC semifinals 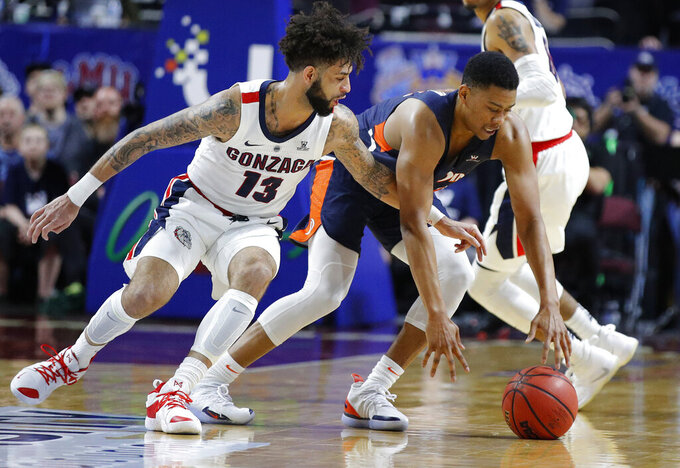 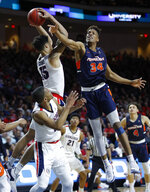 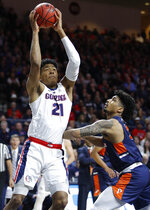 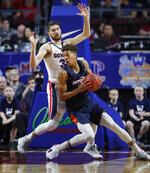 LAS VEGAS (AP) — Zach Norvell Jr. doesn't believe there is a team in the country that can compete with No. 1 Gonzaga when it plays its best game.

The Bulldogs made a strong case to back the junior guard's boasts Monday night.

"When guys are clicking, we're on the same page, and just sharing the ball, Coach yells at us a lot 'Just make the right basketball play,' Norvell said. "You're rewarded when you play the game the right way. And I think that's something we've been trying to do a lot."

The top-seeded Bulldogs outrebounded Pepperdine 37-28, outscored the Waves 13-2 in second-chance points, 29-13 in bench points, and dominated the No. 8 seed in fast-break points, 16-2.

Gonzaga (30-2) will look for its seventh straight WCC title Tuesday when it faces Saint Mary's.

"Just a terrific approach by the guys," Gonzaga coach Mark Few said. "We had a lot of days off, you always wonder how that is going to play out. And to their credit, they came out and attacked the moment and really stayed with it. Even after halftime, they did a great job of really keeping the throttle down. Couldn't have went any better as far as how we wanted to start this tournament."

Pepperdine had the luxury of warming up with three games in three nights, while Gonzaga was playing its first game of the tournament, something that proved costly for San Francisco and BYU on Saturday, when they were upset by the Waves and San Diego, respectively, in their first games of the event.

"I've been coming here for a while, since the AAU days, so I look at myself as a vet when I'm in Vegas," Norvell said. "We look at it as a business trip, as we've been doing all year."

The Bulldogs — who came into the game ranked first in the nation in field-goal percentage (53.4 percent), scoring margin (24.9 points per game) and scoring offense (89.8) — were all business and showed no rust whatsoever, going 39 for 62 (59.7 percent) from the field en route to their 21st straight victory by double digits.

Gonzaga has won those games by an average margin of 30.1 points.

The Bulldogs have won 37 straight against Pepperdine, including a 92-64 blowout in Spokane this season.

"Gonzaga's really good," Pepperdine coach Lorenzo Romar said. "I know I'm stating the obvious, but I've been a head coach for 22 years, and was an assistant at UCLA that won a national championship and I just told my team, 'I know what that looks like.' They're really good."

After falling behind 8-6, the Bulldogs erupted for a 23-5 run to seize control.

Gonzaga, which closed as 24½-point favorite, never relinquished its double-digit lead after pulling ahead 24-13 with 9:40 left in the first half.

The Bulldogs got a boost from the return of Killian Tillie, who played for the first time since partially tearing a ligament in his right foot in early February. Tillie was 3 for 4 from the field in the first half, all 3-pointers, contributing during two separate scoring runs.

Few said Tillie's 5-on-5 practice time had been limited all week, and admittedly was winded after playing just 15 minutes.

"In my mind that was kind of the two runs I wanted him to have, and now we can keep building on that," Few said. "And obviously we need to see how the plantar fascia reacts to going tonight. It sounded good after he came off the bench."

Gonzaga didn't waste any time in the second half, as it opened with a 17-5 run, and increased that streak to 32-12 to put the game out of reach.

Gonzaga: The return of Tillie invoked a huge roar from the sold-out crowd. The 6-foot-10 junior from France had played in only nine games this season after missing the first half of the season with a stress fracture in his ankle, and then re-injuring his foot with the ligament tear on Feb. 7. Tillie finished with nine points and six rebounds in 15 minutes.

Pepperdine: The top 3-point shooting team in the league during the regular season couldn't find a groove. After hitting 14 of 28 from 3-point range in a 17-point upset of San Francisco in the quarterfinals and going 10 for 19 against Loyola Marymount in the second round, the Waves shot 37.5 percent (9 of 24) from beyond the arc against Gonzaga.

Monday marked 20 years to the day Gonzaga got its first NCAA Tournament win, over Minnesota. The Bulldogs ousted three major-conference teams in 1999 and became the tournament darlings before falling to eventual champion Connecticut.

During a first-half timeout, former Gonzaga star Adam Morrison was announced as the 2019 WCC Hall of Fame inductee. Morrison, who was courtside as an analyst for the Gonzaga radio network, led the nation in scoring and was the conference's player of the year in 2006. He led the Bulldogs to three straight conference tournament titles.

Pepperdine: Despite finishing the season two games under .500, the run to the West Coast semifinals and a notable skipper in second-year coach Romar could garner an invite to one of the lower-level postseason tournaments.