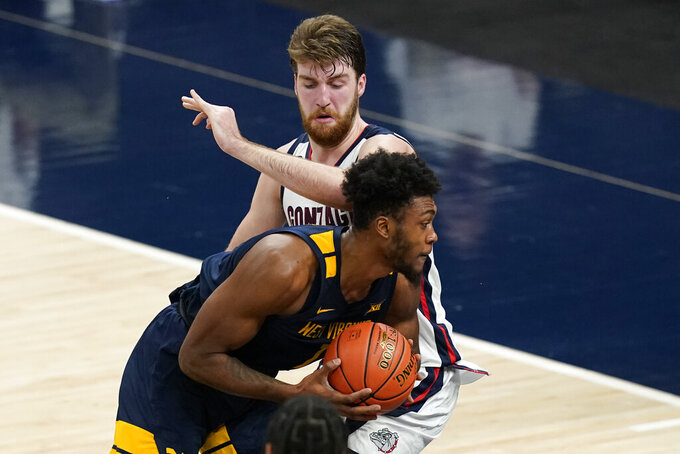 West Virginia's Derek Culver goes to the basket against Gonzaga's Drew Timme during the second half of an NCAA college basketball game Wednesday, Dec. 2, 2020, in Indianapolis. (AP Photo/Darron Cummings) 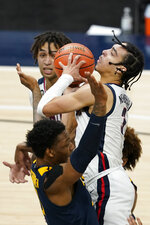 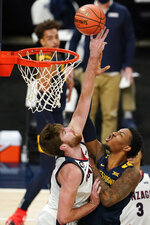 INDIANANAPOLIS (AP) — Losing Jalen Suggs in the first half shook up No. 1 Gonzaga.

Getting him back in the second half Wednesday provided a needed jolt of energy.

Joel Ayayi matched his career high with 21 points and Andrew Nembhard and Corey Kispert each scored 19 points, and Suggs' return shifted the transition game into gear to help the Bulldogs rally past No. 11 West Virginia 87-82.

“At first, we were kind of disappointed because we all love Jalen," Nembhard said. “Him coming back in the game was big for us. He played football so you know he’s tough and we’re pretty versatile so we could do some different things in the second to help him out. It worked out well for us."

The freshman star finished with four points, five assists and six rebound — much of that production coming after he went down with what initially appeared to be a serious left ankle injury.

By the second half, he was lobbying to get back on the court. And once he did, everything turned for Gonzaga, which struggled against the Mountaineers size and strength.

But once they were off and running, it was no match. Gonzaga (3-0) has won seven straight, dating to the end of last season, and already has two wins over top 15 opponents — Kansas and West Virginia (3-1).

Derek Culver finished with with 18 points and 15 rebounds and Oscar Tshiebwe had 14 points and nine rebounds before fouling out with 7:26 to play to lead the Mountaineers. Afterward, Culver blamed himself for this one.

“We're every bit as good as they are — if we don't do dumb things," coach Bob Huggins said. “I think everyone should shoulder the blame."

West Virginia's defense got Gonzaga out of sync early and when it looked like the Bulldogs were about to get going, Suggs drove toward the basket, his left foot sliding through the lane and collapsing to the floor where he stayed for several minutes. He needed help to reach his seat.

And the Mountaineers took advantage of the momentum shift by going on a 33-24lead late in the first half.

When Suggs returned in the second half, Gonzaga charged back.

It retook the lead on Kispert’s layup with 9:46 to play and seized control as Kispert and Ajayi combined for nine points in the decisive run.

West Virginia: The Mountaineers weren't even supposed to be here — until a COVID-19 outbreak forced No. 13 Tennessee to back out. But Huggins' teams never back down from a challenge. They followed the same script Wednesday and nearly pulled a big upset.

Gonzaga: It looks like the poll voters got this one right. The Bulldogs have opened this season with wins over two top 15 foes — Kansas and West Virginia — as well as Auburn, all on neutral courts. Yes, they can and must player better, but finding a way to win when things don't go according to script says a lot about where they are..

Suggs was in pain from the moment he went down. He held a towel over his face and then continued to wince and writhe on the socially-distanced bench. Eventually, he stood up and walked gingerly to the locker room but did not return with what the team called an injured left ankle. Somehow, he made it back on the floor in the second as one of the catalysts of the comeback.

West Virginia guard Sean McNeil also left during the first half after taking an elbow to the forehead. McNeil was called for a foul on the play as he tried to take a charge. He returned to action later in the first half — with four stitches.

West Virginia: “We’ve got a lot of work to do," Huggins said. “We did an extremely poor job of guarding ball screens. We fell asleep too many times. We made some careless errors that came back to bite us.”

Gonzaga: “Jaylen going down and the fact that they were throttling us on the glass and throttling our offense for a while," coach Mark Few said, explaining the obstacles his team had to overcome. “That’s basically how I think a lot of our games are going to go. I don’t think they're going to be a flowy as they were down in Florida."

West Virginia: At Georgetown on Sunday.

Gonzaga: Vs. No. 2 Baylor on Saturday in Indianapolis.