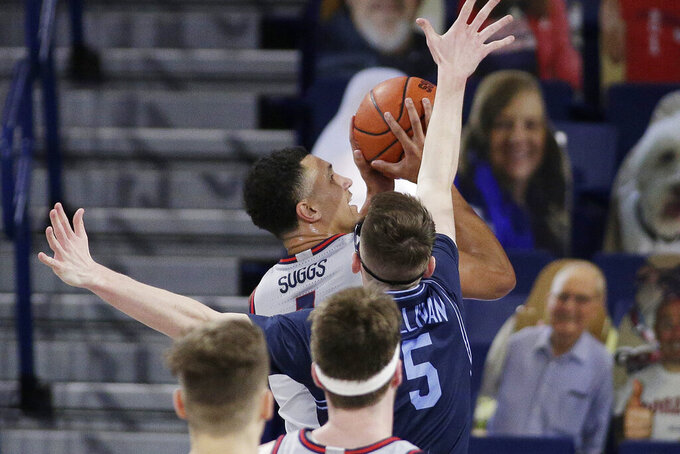 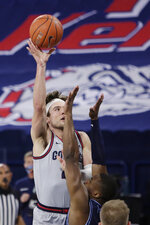 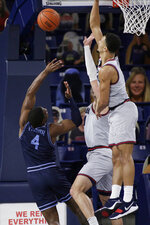 SPOKANE, Wash. (AP) — Even after wrapping up yet another West Coast Conference regular-season crown a few days earlier, No. 1 Gonzaga didn't let up.

Drew Timme scored 17 of his 21 points in the first half, Jalen Suggs added 17 points and the top-ranked Bulldogs won their 26th straight game with a 106-69 romp over San Diego on Saturday night.

“I think we are just becoming more mature and understand that just playing these games doesn’t mean we are going to get a guaranteed national championship and we have to raise our level and keep improving every game,” Gonzaga guard Andrew Nembhard said.

Corey Kispert added 16 points to help Gonzaga (22-0, 13-0) get its 14th straight victory against San Diego and 49th consecutive win at home. Timme has topped the 20-point mark in six of the past eight games, and has reached double figures in all but one game this season.

"He has got great footwork, he has got great hands, he’s got a variety of ways to score,” Gonzaga coach Mark Few said. “He’s hard to double because he doesn’t score in conventional ways but I’m sure eventually we are going to probably see more and more of that.”

The Bulldogs are a win away from matching a program best 50-game home winning streak. Gonzaga will have a chance to break the mark next week with home games against Santa Clara and Loyola Marymount that were rescheduled to make up for earlier postponements.

Josh Parish led San Diego (3-8, 2-5) with 13 points. It was just the second game for the Toreros since losing to Gonzaga 90-62 on Jan. 28 due to a lengthy pause because of COVID-19 concerns. The Toreros have had 10 games postponed or canceled this season.

Timme and the Bulldogs blew it open midway through the first half and were never challenged. The Zags led 51-22 at halftime and by as many as 44 in the second half. The majority Gonzaga’s starters — four finished in double figures scoring — checked out with more than 10 minutes remaining and watched as reserves carried the Zags over the century mark for the fifth time this season.

Timme made 7 of 8 shots in the first half as Gonzaga capitalized on 12 turnovers and quickly turned a six-point lead into a 33-13 advantage on Joel Ayayi’s jumper. Gonzaga’s big halftime lead came without any contributions from the perimeter. The Zags missed of their seven 3-point attempts in the first half.

“We really, really score in the paint and have a high percentage of shots in there, and we’re very efficient in there and it comes in a variety of ways,” Few said. “It comes off wheeling and dealing, it comes off cuts, it comes off finishes at the rim by Jalen and Corey. It’s just kind of what we do.”

Nembhard hit Gonzaga’s first 3-pointer early in the second half and the Bulldogs finished 5 of 19 from deep.

Gonzaga has won 19 consecutive games by double digits. It matches the longest single-season streak by a No. 1 team since UNLV won 19 straight by 10 or more in 1990-91. The record for consecutive double-digit wins by a No. 1 is 20 by the undefeated national champion 1971-1972 UCLA team.

Gonzaga: The Bulldogs never trailed against San Diego, continuing a season-long theme at home. In 400 total minutes played at “The Kennel” this season, the Zags have trailed for a total of 50 seconds.