No. 1 Gonzaga routs Central Michigan, to face No. 2 UCLA 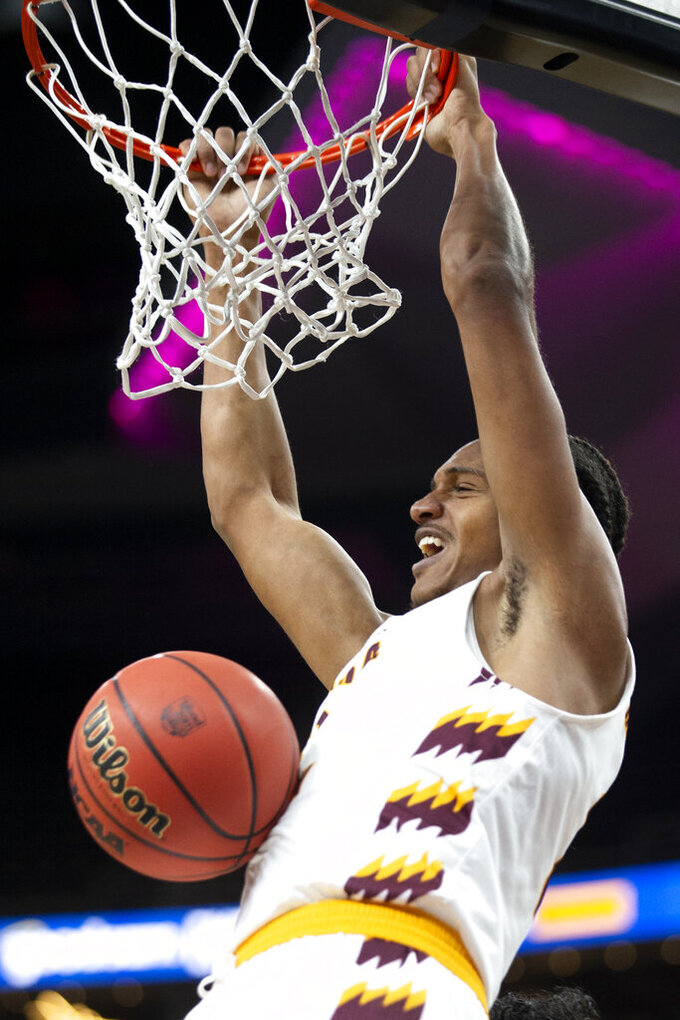 LAS VEGAS (AP) — Chet Holmgren scored 19 points and No. 1 Gonzaga breezed past Central Michigan 107-54 on Monday night in the Empire Classic ahead of a Final Four rematch with No. 2 UCLA.

Gonzaga (5-0), the No. 1 team for the 19th straight week, has defeated its first five opponents by an average margin of 33.6 points.

Gonzaga, which came into the game averaging 89.8 points per game, topped the 100-point plateau for the first time this season behind double-digit scoring from five players.

Holmgren is the third player to finish as the leading scorer for the Bulldogs this season.

“These guys are good, you just straight up tell them what’s going on and they usually handle their business pretty good,” Gonzaga coach Mark Few said. "That was the biggest, longest, physical team we’ve played thus far this year, as far as their length around the rim and all that. I thought our bigs did a nice job attacking them, and putting some foul pressure on.”

The Bulldogs outrebounded Central Michigan, 51-23, while they got 22 points off the Chippewas’ 17 turnovers.

Gonzaga will face the Bruins on Tuesday, its second showdown with a top-5 opponent this season after beating then-No. 5 Texas 86-74 on Nov. 13. Gonzaga beat UCLA in last year’s NCAA Tournament 93-90 in overtime on a buzzer-beater by Jalen Suggs.

Jermaine Jackson Jr., who came in leading Central Michigan with an average of 14.3 points per game, was held to just eight.

“We’re trying to keep a holistic approach to this season,” CMU associate head coach Shane Heirman said. “Obviously we’re gonna compete every single time we come on the floor, but you want to keep the bigger picture in mind. When you’re playing teams like the quality of Gonzaga, they’re able to kind of pick apart our inexperience. And so we just gotta continue to grow and continue to get better each time we step on the floor.”

Gonzaga used a 17-0 run in the first half to build its biggest lead at 52-23. The Bulldogs shot a blistering 60.5% from the floor and outrebounded Central Michigan 23-10. The Zags dominated play in the paint offensively, outscoring the Chippewas 40-6 from the key.

Despite shooting 50% from 3-point range in the first half, hitting 7 of 14 from beyond the arc, the Chippewas’ effort only got them within 24 at halftime, trailing 56-32.

The Bulldogs’ relentless defense in the first half triggered a transition game that saw them turn 10 CMU turnovers into 15 points. They were also dominant with seven offensive rebounds and outscored the Chippewas 6-0 with second-chance points.

“Good trend for us we’ve been really, really good defensively in the first halves pretty much all year,” Few said.

Gonzaga has plenty to be thankful heading into its showdown with the Bruins, as history is on its side with a 41-10 mark under coach Mark Few in tournaments during the week of Thanksgiving. The Zags improved to 30-4 over the last seven Thanksgiving week tournaments.

Central Michigan, which opens the season with seven games away from Mount Pleasant, Mich., won’t play at home until Dec. 5, when it hosts Western Illinois.

Gonzaga faces No. 2 UCLA in Las Vegas on Tuesday.