No. 1 Michigan State will find out soon how it stacks up 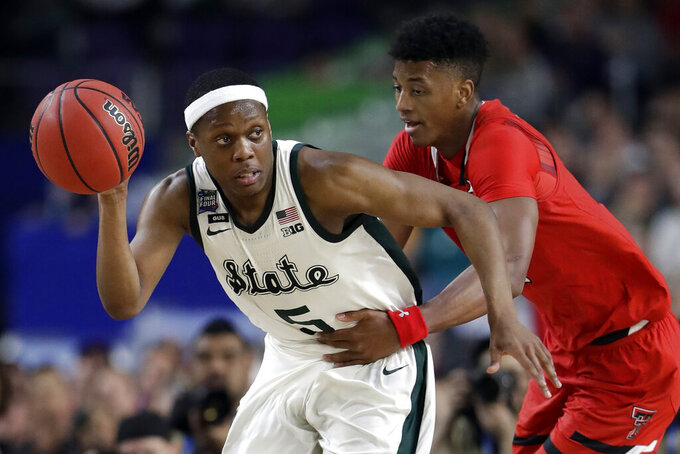 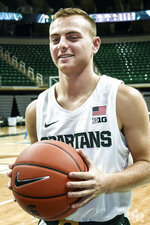 EAST LANSING, Mich. (AP) — Michigan State's basketball team is ranked No. 1 in the preseason for the first time and is looking forward to validating the votes.

"Now you have to go out and prove why you're ranked No. 1," All-America guard Cassius Winston said.

The Spartans will find out soon if they're that good because Hall of Fame coach Tom Izzo has put together one of his toughest schedules — even for him. Izzo regularly tests his teams during the nonconference schedule, hoping it prepares them to win Big Ten championships and contend for national titles.

If Izzo can cut down the nets after winning a second NCAA championship, he may look back on a grueling gauntlet of games fondly.

The top-ranked Spartans open the season against No. 2 Kentucky on Nov. 5 in New York and return to the area the following week to play No. 12 Seton Hall. At the Maui Invitational, Michigan State could match up with No. 3 Kansas. And less a month after the opener, Michigan State plays No. 4 Duke in one of the most highly anticipated games in Breslin Center history.

Winston could have entered the NBA draft last summer as an All-America guard and Big Ten player of the year. Winston briefly looked into his options with the league and was told he would likely be a second-round pick. He returned for his senior season in the hopes of capping his career with the school's third national championship.

"You dream of going to the NBA, that's the ultimate goal, and it's hard to turn down," he said. "But the NBA is going to be there."

Winston is the only consensus selection on The Associated Press preseason All-America team.

To be considered one of the best at the end of the year, Winston relentlessly worked on improving his 6-foot-1, 185-body over the offseason after being told to rest for six weeks. Winston said he reduced his body fat by 6% after lifting weights five days a week.

"He is the straw that stirs the drink and I think deserves all the attention he's been getting because he is a special player," Izzo said.

Michigan State will be without senior Joshua Langford, the projected starter at shooting guard, until at least January. He had a setback with a foot injury that led to him playing just 13 games last season and needing surgery after averaging 15 points per game.

"He's handled everything a lot better than I would have handled it," Izzo said. "And, now my job is to support him in every way I can."

Senior Kyle Ahrens is out for about a week with an ankle injury after missing last season's run to the Final Four because of an ankle injury. Highly touted freshman guard Rockets Watts was limited in a scrimmage against Gonzaga because of a strained Achilles tendon injury, but he was able to practice this week.

Michigan State opens the season with Xavier Tillman and Aaron Henry returning as starters along with Winston and four other players coming back with some level of experience from last season. The Spartans may miss the low-post scoring presence of Nick Ward, who skipped his senior year to play professionally. They also will need new players to step in to fill the outside shooting, defensive and leadership roles previously filled by Matt McQuaid and Kenny Goins.

Izzo's son, Steven, is a walk-on freshman after growing up going to games as a fan in the stands. The 5-8, 150-pound guard played for Lansing Catholic High School last season, playing without his father in attendance 16 times.

"I just want to make sure everybody knows nobody's taking a scholarship from anybody or really a spot from anybody," Izzo said.