No. 1 seed Virginia, No. 3 Purdue meet in South Region final 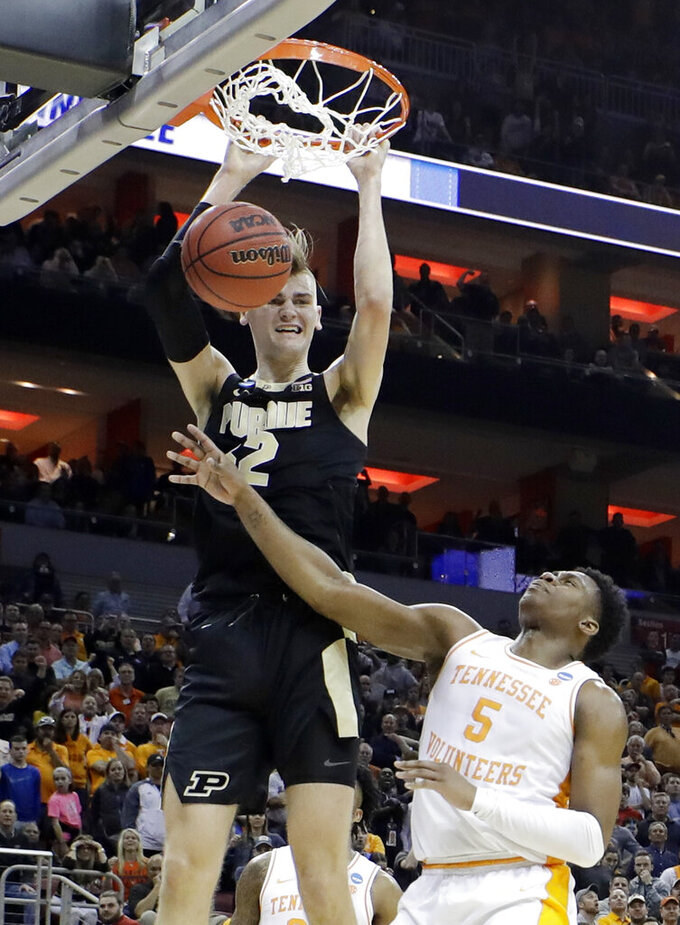 High scoring has carried No. 3 seed Purdue, which scored 99 points to beat Tennessee in overtime and earn its first Elite Eight appearance since 2000. Both schools expect their respective strengths to be tested Saturday night in an intriguing South Region final with a Final Four berth at stake.

"Our defense is going to take us as far as we want to go," Virginia guard Kihei Clark said Friday. "Just going to have to do a good job on the defensive end."

The winner will end a decades-long Final Four drought. Purdue (26-9) hasn't advanced that far since 1980, while Virginia (32-3) hasn't been since 1984. It would also break new ground for Purdue coach Matt Painter and Cavaliers counterpart Tony Bennett, who's in his second regional final in four years.

Virginia's tournament path began roughly against Gardner-Webb and smoothed out some against Oklahoma before it had to grind past No. 12 seed Oregon for a 53-49 victory . That was somewhat expected, but the Cavs also have a good offense and aim to show it.

"We're going to need a complete performance from everyone," Bennett said.

Virginia's task is slowing a Purdue squad that has scored 186 points and averaging 1.33 points per possession in NCAA Tournament wins over defending champion Villanova and Tennessee. The Cavs' main focus is slowing Boilermakers junior guard Carsen Edwards, who had 29 points in the Sweet 16 win and expects Virginia to present a greater challenge.

"Virginia, I feel like, is apart from a lot of teams defensively," Edwards said. "It will be something different for us."

The Boilermakers are coming off a 99-94 win over No. 2 seed Tennessee after blowing an 18-point, second-half lead and trailing by two in the final seconds. Edwards was fouled on a 3-point attempt and made two of three free throws to force overtime, and Purdue simply reset in extra time for a five-point win.

Purdue knows that kind of scoring won't come easy against Virginia's pack line defense that pressures the ball handler and sealing off the lane.

And particularly with so much at stake.

Added Edwards: "Whatever it is that we have to do to win, whether that's just battling it out on the defensive end and trying to stop them as well or if it's a slower-paced game, just trying to value each possession. So we'll see."

Other things to watch in the South Region final:

Virginia guard Kyle Guy and Purdue's Ryan Cline were teammates on an Indianapolis-area AAU team and keep in touch. But as high school counterparts, Guy recalled making Cline fall on a crossover move that Cline didn't remember and planned to ask him about. "That's not cool of him to say," Cline said, laughing. "I'll definitely talk to him about that."

Bennett said the Atlantic Coast Conference's schedule of playing Saturday and Monday games has prepared his team for the tournament's rigors of playing twice in three days. This break is slightly different after Virginia's Sweet 16 game started late Thursday and ended early Friday morning, but the coach has urged his players to get used to a quick turnaround.

"You're going to have to play a big-time opponent on one day's prep," Bennett said. "I said in a way, set your mind to it."

Virginia and Purdue are meeting for the first time in the NCAA Tournament and third time overall. They've split two games, with the Cavs winning the previous meeting 61-59 at Purdue on Nov. 29, 2006.