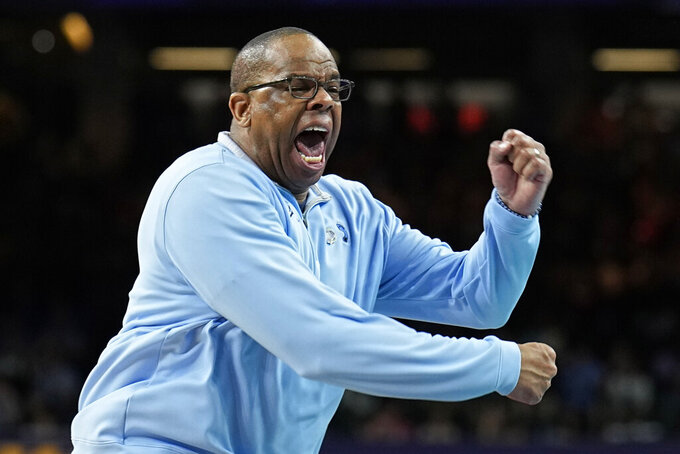 FILE - North Carolina coach Hubert Davis reacts during the second half of a college basketball game against Kansas in the finals of the NCAA men's college basketball tournament, April 4, 2022, in New Orleans. Four starters return from a team that showed off its best-case potential, while Davis has restocked a roster that was largely down to relying on an “Iron Five” starting lineup to close last year. (AP Photo/Brynn Anderson, File)

One month of inspired play changed everything about how people remember Hubert Davis' first season at the helm of North Carolina.

It's also the reason why the Tar Heels open this year as the nation's No. 1-ranked team.

The Tar Heels went from being a bubble team in February marked by inconsistent play and blowout losses in measuring-stick games to making a rousing run to the NCAA championship game as a No. 8 seed. Four starters return from a team that showed off its best-case potential, while Davis has restocked a roster that was largely down to relying on an “Iron Five” starting lineup to close last year.

Returning starter RJ Davis even uttered “championship or bust” when discussing his mindset.

Davis, who followed retired Hall of Famer Roy Williams, has never changed his goals of contending for championships. He remained positive while saying he believed in his team amid last year's ups and downs.

Then came the unexpected win at Duke in the spectacle of a final home game for retiring Blue Devils Hall of Famer Mike Krzyzewski. A wild NCAA second-round overtime win against reigning champion Baylor. A tense Sweet 16 standoff with UCLA and a romp against 15th-seeded tournament darling St. Peter's to reach a record 21st Final Four.

Once there, the Tar Heels beat the Blue Devils again in an epic third meeting that marked their first NCAA Tournament meeting and closed Krzyzewski's career. They even went up 16 on Kansas in the title game before losing the lead in a game that ended with Caleb Love's off-target desperation 3-pointer to force overtime in New Orleans.

Outside-shooting big man Brady Manek is gone. But double-double machine Armando Bacot is back in the post, while Leaky Black returns as the team's top defender to play alongside the Davis-Love backcourt.

The last time the Tar Heels had a title-game loss, the core of that group used the painful memory to drive them the next season all the way to the program's sixth NCAA championship in 2017.

Davis was an assistant to Williams then. He'd love a repeat.

“We kind of want to write our own story,” Love said. “This is a new team. This is a new age. For us to go out this year and do what we've got to do, knowing what happened last year, we're more motivated than ever.”

He finished with 31 double-doubles last season, tying the NCAA single-season record set by Navy's David Robinson in 1985-86 before a long NBA career. He also became the first player ever to post six double-doubles in the same NCAA Tournament, including 15 points and 15 rebounds against the Jayhawks despite an ankle injury.

Love, a 6-4, third-year guard, improved his shooting (.371) and specifically his 3-point (.360) and free-throw (.863) shooting percentages from a rocky freshman season. He averaged 15.9 points, but has also shown the ability to take over games with a fearless confidence.

After finding transfer portal success with Manek, the Tar Heels went back and lured Pete Nance from Northwestern.

The 6-foot-10 graduate led the Wildcats in scoring, rebounding and 3-point percentage. The latter piece is particularly important considering Manek's ability to step outside filled a vital piece of Davis' approach to modifying UNC's attack with a bigger emphasis on floor spacing.

Nance isn't as prolific as Manek outside but has more length, which could offer more defensive help inside.

The Tar Heels' freshman class is headlined by 6-3 guard Seth Trimble, ranked No. 37 nationally by 247sports. UNC also added 6-9 forward Jalen Washington and 6-8 forward Tyler Nickel, while 6-10 forward Will Shaver could see his first action after joining the program as a midyear addition last season.