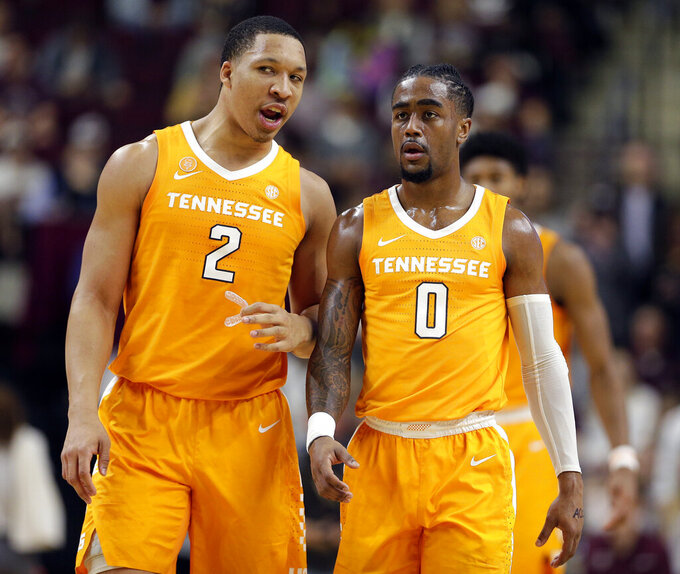 Tennessee forward Grant Williams (2) and guard Jordan Bone (0) talk as they head to the free throw line after a foul during the first half of an NCAA college basketball game against Texas A&M, Saturday, Feb. 2, 2019, in College Station, Texas. (AP Photo/Michael Wyke) 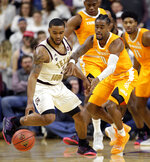 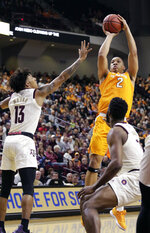 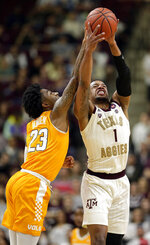 This team has much bigger goals.

"We have a long way to go," Williams said. "We have a long season ahead of us. It's nice to set that record but we want more. We can't ever settle because if we settle or we start thinking that's all we want we're going to drop to teams left and right."

Tennessee was clinging to a two-point lead midway through the second half before a 5-0 run, capped by a 3-pointer from Jordan Bowden, made it 70-63. Those five points were the start of a 10-3 spurt, with a 3 from Lamonte Turner that extended the lead to 75-66 with 8 1/2 minutes to go. Williams added a dunk in that stretch and had a big defensive play with a block on TJ Starks.

Wendell Mitchell and Savion Flagg made 3-pointers for A&M to power 6-3 run after that, but Tennessee scored the next seven points to stretch the lead to 85-72 with about 6 1/2 minutes remaining.

Jordan Bone went 7 for 7 and finished with 18 points and 10 assists for Tennessee and Turner had 19 points and seven assists. Williams, the SEC's leading scorer, had 10 rebounds and four assists.

Tennessee coach Rick Barnes raved about the leadership of Bone and said he spoke to the team in the huddle during timeouts late in the second half.

"I really didn't have to say a word, Jordan Bone, everything I wanted to say he was saying," Barnes said.

The Volunteers led by 7 at halftime and had pushed their lead to 60-51 with about 13 minutes left. Mitchell made a 3-pointer for A&M and then stole the ball on the other end. He was fouled on the fast break by Turner and made 1 of 2 free throws to get the Aggies within 5.

Texas A&M got a 3-pointer by Brandon Mahan after that to make it a 7-0 run and cut the lead to 60-58. Bone got Tennessee going after that with a 3-pointer, but Mitchell hit another 3 for Texas A&M to leave the lead at 2.

Bowden scored 16 in his return after missing the team's last game with a knee injury. Tennessee led by as many as 19 in the first half but the Aggies cut the lead to 46-39 by halftime.

Tennessee: The Volunteers are rolling and there's no reason to think they'll slow down. It's the earliest they've reached 20 wins since the 2007-08 season when they achieved the mark on Feb. 5 and went on to win the SEC championship.

Texas A&M: The Aggies look to be improving but haven't developed the consistency needed to compete with the elite teams in the conference.

Barnes was asked after the win if this team is the best he's ever coach. The veteran coach, who had stops at George Mason, Providence, Clemson and Texas, before taking over at Tennessee took a second to ponder the question. Barnes had a streak of 17 straight NCAA tournament appearances from 1996 at Clemson through 2012 at Texas, with the highlight coming when he led the Longhorns to the Final Four in 2003. He also coached Kevin Durant in his one season at Texas in 2006-07 when he won Associated Press player of the year.

"The team that went to the Final Four at Texas was a pretty good team," Barnes said. "It's hard as a coach to say what's your best team until it's put in the books from start to finish. I would like to think that this team's best basketball is ahead of them."

The Volunteers have been great offensively all season and entered the game ranked second in the nation with a shooting average of 51 percent. But on Saturday they took things up another level when they shot 64.5 percent.

"Offensively I'm not sure we can be any more efficient to be honest with you," Barnes said.

Tennessee: The Volunteers host Missouri on Tuesday night in the first of three straight home games.