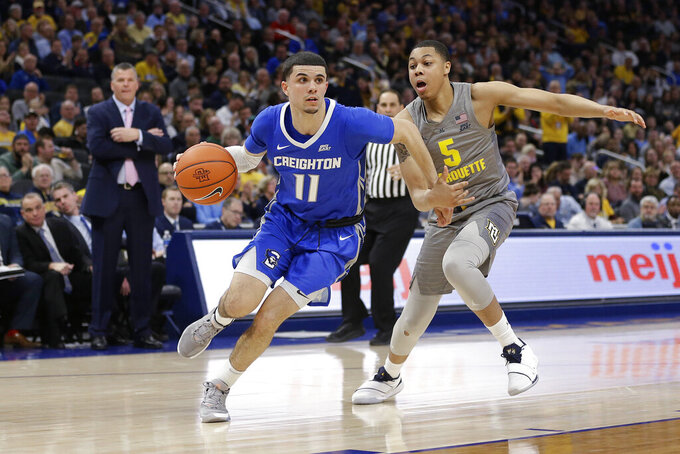 Creighton's Marcus Zegarowski (11) drives to the basket against Marquette's Greg Elliott (5) during the second half of an NCAA college basketball game Tuesday, Feb. 18, 2020, in Milwaukee. (AP Photo/Aaron Gash) 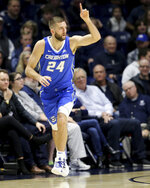 OMAHA, Neb. (AP) — A season that started with low expectations could finish at unprecedented heights for Creighton.

The 10th-ranked Bluejays are one of the hottest teams in the nation heading into their final three regular-season games. They've knocked off four Top 25 opponents while winning nine of their last 10. They sit one game behind first-place Seton Hall in the Big East.

“Right now, we've put the pieces together, we're playing connected,” guard Mitch Ballock said. “When we do that, we have the ability to skyrocket.”

The Bluejays (22-6, 11-4) came into the season picked seventh in the 10-team Big East, and with two projected starters out for the year because of injuries. Since a 1-3 stretch in January, they've been nearly unstoppable.

Creighton, which didn't appear in The Associated Press Top 25 until Jan. 13, has its highest ranking since it was No. 7 in 2017. The Bluejays are No. 8 in the NCAA's latest NET rankings, and their nine Quad 1 wins trail only Kansas, Baylor and Seton Hall. Most NCAA bracket projections list them as a No. 3 seed.

Ballock, Marcus Zegarowski and Ty-Shon Alexander rank in the top five in Big East 3-point shooting, each making 40% or better in an offense that thrives in transition. Damien Jefferson, the fourth guard, stuffs the stat sheet with his versatility. The 6-foot-7 Christian Bishop, who was forced into the center's role out of necessity, has become a major factor. Another weapon was added when transfer Denzel Mahoney became eligible in December.

“No one cares who scores. No one cares who does what,” Zegarowski said. "We just want to win and play for each other. That's the system coach McDermott has made for us.”

Unselfishness is the main characteristic of the team, McDermott said, and it shows in the numbers.

Alexander not only is the team's leading scorer (16.9 ppg), he's usually tasked with defending the opponent's best player. He shut down star Markus Howard for long stretches in two wins over Marquette, and he leads the Bluejays in steals.

“If there's a better two-way guard in this league,” McDermott said, “I don't know who it is.”

Next up is Sunday's game at St. John's. Win there, and the Bluejays would return home for their final two games against Georgetown and Seton Hall with a chance to win the Big East regular-season title for the first time since they entered the league seven years ago.

The Bluejays have taken a different approach than the last Creighton team to rank as high. That was the 2016-17 squad that had a national player of the year candidate in Maurice Watson, Big East freshman of the year Justin Patton, defensive player of the year Khyri Thomas and All-Big East guard Marcus Foster.

Creighton got out to an 18-1 start, and players were vocal about their goal of making the Final Four — even though the program has never won more than one game in an NCAA Tournament. After a season-ending knee injury to Watson, the Bluejays went 7-9 and were one-and-done in the tournament.

Ballock said it makes no sense to dwell on the ultimate goal when there are others to achieve first.

“You've got to start from where we haven't been," he said. “We haven't been to the Sweet 16. Right now we're trying to win a Big East title.”

Alexander said the Bluejays can't let themselves buy into the hype surrounding the team now.

“Our job is not done yet,” he said. “We all have big dreams of making it to the Final Four. We have to do it game by game. We can't look to the future because we don't know what the future holds for us. We're trying to get better every single day. Win the Big East and then, hopefully when the time comes, we'll go to March Madness and just dance our way through to the Final Four.”