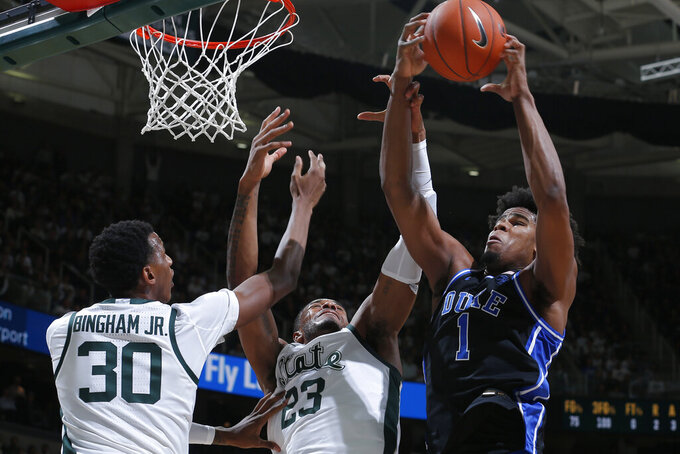 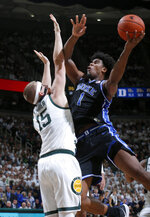 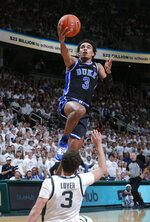 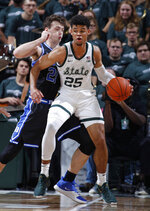 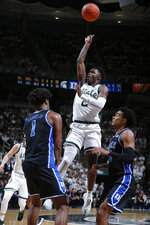 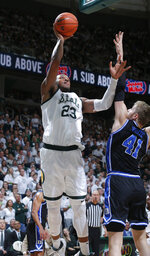 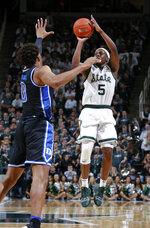 Carey had 26 points, 11 rebounds and three blocks to help No. 10 Duke dominate the 11th-ranked Spartans in an 87-75 victory Tuesday night.

The 6-foot-10, 270-pound freshman was recruited hard by Michigan State and seemed very interested in attending the school, but ended up signing with the Blue Devils and came back to haunt coach Tom Izzo.

Duke (8-1) looked like one of the top teams in the country and not a rebuilding one a week after losing at home to Stephen F. Austin.

“If we played like this last week, we would’ve won two games instead of one,” coach Mike Krzyzewski said. “But we didn’t because we’re learning.”

Blue Devils guard Tre Jones scored 20 points, matched a career high with 12 assists and made three steals as part of a defensive effort that forced several turnovers early in the game and a total of 14.

“The way we fought and the way we defended is something that we’ve done almost all season except last week,” Jones said. “So we’ve got to keep that up.”

The Spartans (5-3) went into the game “a little fragile,” according to Izzo, and they looked out of sync and overmatched.

Duke went on an 8-1 run midway through the first half to build a double-digit cushion and led 45-29 at halftime.

“We got it taken to us early and we didn’t respond,” Izzo said, noting he was embarrassed by the performance.

Cassius Winston made a 3-pointer to pull the Spartans within eight early in the second half.

Carey answered the surge with a three-point play and a layup to restore a double-digit advantage the Blue Devils had no trouble maintaining.

“They did a good job of trapping me and getting the ball out of my hands and forcing other guys to make plays,” he said.

Xavier Tillman, perhaps wearing No. 23 for the last time because Draymond Green’s jersey was retired by Michigan State at halftime, scored 20 points and Marcus Bingham added 13.

Aaron Henry was held to two points after entering the game averaging 12-plus for the Spartans.

Duke played without high-flying guard Cassius Stanley, who is out indefinitely with a muscular injury in his left leg. The team had more than enough to make up for the nearly 13 points he averages a game.

Matthew Hurt scored 10 points for the Blue Devils, who got 11 from Joey Baker and 10 from fellow reserve Javin DeLaurier.

Duke: Carey and Jones looked like the sort of stars the Blue Devils can build around to become one of the best teams in the country.

“We’ve got to be more consistent with this play now,” Jones said. “We can’t have any lapse like we did last week.

“We know the type of team we can be, and getting a road win like this is big for us.”

Michigan State: Izzo has a lot of work to do in trying to rally a team that has been reeling since Winston’s brother died last month.

“It’s my job to get them ready and I’m going to do a better job of getting them ready,” Izzo said. “I won’t panic like most fans because I’ve been here before.”

The Blue Devils will likely get a boost in next week’s poll, while the Spartans will continue to fall from their No. 1 ranking in the preseason.

Green’s jersey was retired during a halftime ceremony that included a slew of former Spartans, including Steve Smith, whose No. 21 has also been retired.

The Golden State Warriors star said he isn’t sure if he’ll let Tillman continue to wear his number, adding he isn’t sure he has that much power.