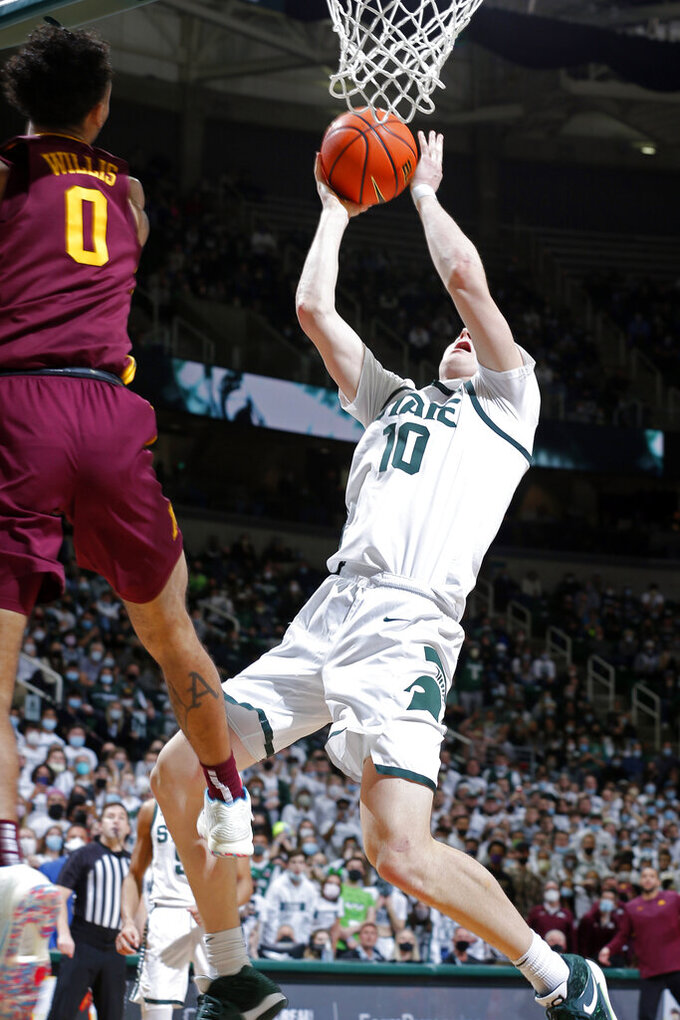 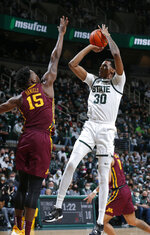 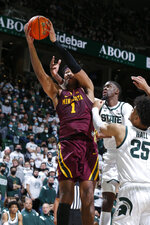 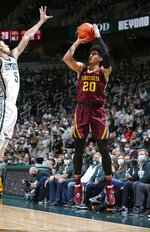 EAST LANSING, Mich. (AP) — Joey Hauser made a low-post shot with a tenth of a second left, lifting No. 10 Michigan State to a 71-69 victory over Minnesota on Wednesday night for a ninth straight win.

The Spartans (14-2, 5-0 Big Ten) had the ball with 18.1 seconds left, and A.J. Hoggard drove into the lane in the final seconds to set up the much-maligned Hauser for the final basket.

The Golden Gophers (10-4, 1-4) were very competitive throughout the game and had opportunities to pull off the upset.

Minnesota's chances to win were hurt when Eric Curry injured his left ankle with a minute left, putting him on the bench with 19 points.

“EC got the ankle pretty good," coach Ben Johnson said. “I don’t know the extent of it.

“If Eric can go, Eric’s going to go. He’s a grown man. He’s kind of the leader of our team and he did a great job of showing that.”

Eylijah Stephens scored 18 points, Payton Willis had 15 and Jamison Battle added 13 points for the Gophers. Stephens made four free throws late, putting the teams in a 69-all tie.

The Spartans started strong, but couldn't sustain success against a scrappy team.

The Spartans led 27-17 late in the first half, but they got sloppy and Minnesota took advantage to cut its deficit to three at halftime.

The Gophers scored seven straight points, five off turnovers, to take a 52-51 lead midway through the second half. Michigan State went ahead by six points a couple times, but could not put Minnesota away.

In the conference opener for both teams last month, Michigan State beat Minnesota 75-67 in Minneapolis.

“They were introduced to Big Ten basketball," Johnson said. “That was the first game like, `Welcome to the show.’ I didn’t feel like we responded well.

“We’ve slowly figured out how to play in this league to give yourself a chance with physicality and mental toughness. We’re in a growing process with a lot of guys who have never been here. That’s the fun part of this group because you can see it develop.”

Minnesota guard Luke Loewe was called for a flagrant foul for tripping Brown when Michigan State was leading 42-40 with 15:18 left. Brown made two free throws and Walker had a layup, making it a four-point swing.

Minnesota: Johnson was disappointed his team didn't win, but was proud of how hard and well his team played against a top-10 opponent on the road.

“If you play like that with that type of intensity, aggressiveness and connectivity we’re going to have a fun second half," Johnson said.

FACE IN THE CROWD

Hall of Famer Roy Williams and his wife, Wanda, had courtside seats across from Michigan State's bench and was with the Spartans in the locker room after the game.

Williams retired last April after winning more than 900 games and three national titles at North Carolina and Kansas. He watched the ninth-ranked Jayhawks beat No. 15 Iowa State 62-61 on Tuesday night.

“He called me a couple weeks ago and said he wanted to go to six or seven places," Izzo said.

Michigan State's previous game against rival Michigan last Saturday was postponed because the Wolverines had fewer than seven scholarship players, who cleared COVID-19 protocols to play. That might have led to the Spartans lacking energy at times against Minnesota.

“We’re coming off a disappointing no-play, and it’s no excuse,” Izzo said.