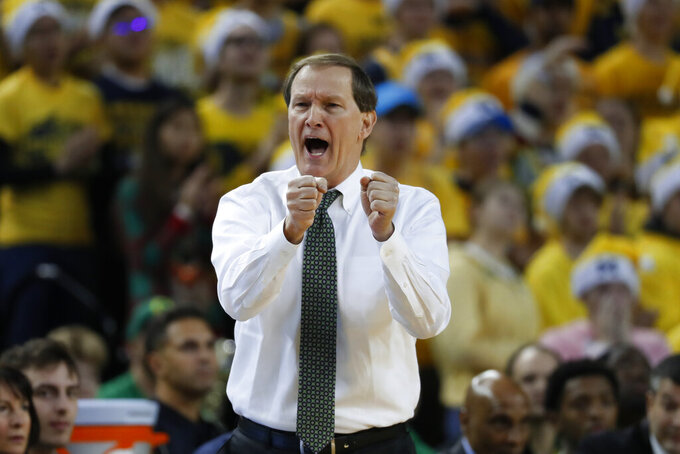 Oregon head coach Dana Altman reacts to a play against Michigan in the first half of an NCAA college basketball game in Ann Arbor, Mich., Saturday, Dec. 14, 2019. (AP Photo/Paul Sancya) 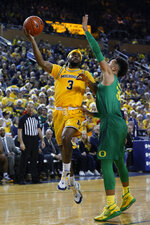 Pritchard scored 19 of his 23 points after halftime, and No. 10 Oregon outlasted No. 5 Michigan 71-70 in overtime Saturday. With the game on the line, Pritchard repeatedly drove past Michigan's Zavier Simpson, and although Simpson had eight points and 11 assists, the Wolverines lost their second straight game.

“I thought the intensity was really high. When they started hitting shots in the second half, their intensity went way up,” Oregon coach Dana Altman said. “I thought the guys fought it off just enough to win.”

Oregon (8-2) built a 16-point lead in the first half, then had to withstand an extended Michigan charge. Anthony Mathis nearly won it for the Ducks with a long 3-pointer at the end of regulation, but a replay showed he released the shot just after the clock ran out.

Simpson's calling card has been his defense during his Michigan career, but the Wolverines (8-3) had no answer for Pritchard late. He scored 13 of Oregon's points in a row at the end of regulation and the start of overtime.

“With a point guard, you just kind of pick and choose what’s the time to go and when to not,” Pritchard said. “I felt throughout the game, I could’ve hit those gaps, but you’ve got to wait for it to open up. They started not collapsing as much, and that’s when I was able to get to the rim.”

Pritchard scored the Ducks' final points of the game on a driving layup that put Oregon up 71-68. Then David DeJulius made a baseline jumper for the Wolverines and forced a turnover on the inbound pass.

Michigan's final possession lasted a while. DeJulius missed a driving shot, and the ball went out of bounds after a scramble near the basket. The Wolverines kept possession after a lengthy review, but Simpson missed a driving hook shot in the final seconds, and a tip-in attempt by Brandon Johns wouldn't drop.

“We got the ball in the hands of the right person we wanted to have it," Michigan coach Juwan Howard said. "I love the look that we had.”

Michigan shot 7 of 29 in the first half and flubbed three dunk attempts toward the end. Oregon led 31-23 at the break.

Oregon: The Ducks are building quite a resume early this season. They beat Memphis and Seton Hall last month and now have this impressive road win as well. Their only losses were to Gonzaga and North Carolina.

Michigan: The Wolverines have had problems on the rare occasion when the opposing point guard can get the better of Simpson. They lost three times to Cassius Winston and Michigan State last season, and they weren't able to overcome a terrific performance by Pritchard.

“Every bucket he made, he had to earn it,” Howard said. “Overall, I love how our defensive disposition was displayed today.”

After the rough start, Michigan made its first five 3-point attempts following halftime. Isaiah Livers scored the Wolverines' first 11 points of the second half.

Freshman Franz Wagner scored 18 of his 21 points after halftime.

“You've just got to take what the defense gives you and stay confident out there," Wagner said. "I think everybody does that on our team.”

Mathis scored 19 points and made six 3-pointers, so it wasn't a shock when his deep 3 at the end of regulation went in. He took off celebrating, but after a review, the shot was ruled too late to count.

“I was trying to get it off as fast as I could, and then adrenaline started kicking in,” he said. “I just had to celebrate, and then we know how it went.”

Oregon can expect to move up in the rankings, and Michigan should drop. This wasn't a bad loss for the Wolverines, but they fell at Illinois earlier in the week as well.

Michigan: The Wolverines' schedule eases up as well with a visit from Presbyterian next Saturday.