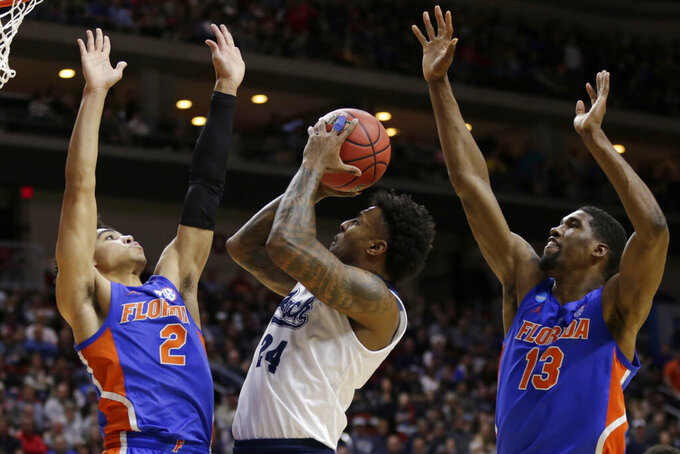 Nevada's Jordan Caroline (24) shoots between Florida's Andrew Nembhard (2) and Kevarrius Hayes (13) during the first half of a first round men's college basketball game in the NCAA Tournament in Des Moines, Iowa, Thursday, March 21, 2019. (AP Photo/Nati Harnik) 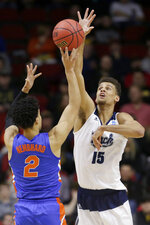 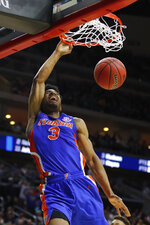 DES MOINES, Iowa (AP) — Florida was cruising toward a surprisingly easy victory over Nevada in its opening NCAA Tournament game.

Then Nevada furiously tried to stave off the upset with a frantic second-half push that fell just short. Florida nearly squandered a double-digit lead before finally stopping the comeback and closing out a 70-61 Thursday night victory in the West Region.

"I thought we were just watching the clock and hoping a little bit," Florida coach Mike White said about Nevada's late push.

Andrew Nembhard, whose last-second shot beat LSU in the Southeastern Conference Tournament last week, drove to the basket for a layup with 1 ½ minutes left and Florida scored the last seven points after the seventh-seeded Wolf Pack had rallied from down 18 to cut the deficit to just two points.

The Gators (20-15) were the third double-digit seed to win Thursday.

Cody Martin scored 23 points and twin brother Caleb Martin had 19 for the Wolf Pack (29-5). The two combined for 28 of their team's 33 points in the second half as Nevada rallied.

"They did a great job of speeding us up," White said. "They made us play a little faster. Their run was fantastic. They were getting stops, playing with a crazy amount of energy. We did just enough. We were very fortunate to hold on."

The Gators controlled the pace into the second half with their deliberate offense, often letting the shot clock run into single digits before shooting. The SEC's top-rated defense clogged passing and driving lanes and contested almost every shot.

"We knew what they were going to do," Caleb Martin said. "Unfortunately, we had a lot of mental breakdowns. We missed some crucial free throws and just didn't get off to a good start."

KeVaughn Allen made back-to-back shots to start a 12-0 run early in the second half that swelled the Gators' lead to 51-33 with 14 minutes left.

The Wolf Pack began to bother Florida with their full-court press. After Caleb Martin stole the ball from Jalen Hudson in the backcourt and dunked, it was 58-51 with 6 minutes to play. Caleb Martin's two free throws made it 63-61 with 2:02 left, but Nevada could get no closer.

"They really sped us up," Hudson said. "We were playing too fast and making jump passes, which aren't allowed here. With three or four minutes left in the game we were able to snap back in get into our rhythm."

Florida: The Gators can count on Nembhard in the postseason. He had only eight points against Nevada, but he came up big when needed and stemmed the Wolf Pack's comeback with a dazzling drive to the basket against Jazz Johnson.

Nevada: The Wolf Pack made a run to the Sweet 16 last year after overcoming deficits of 14 points to beat Texas in overtime and 22 to beat Cincinnati. They couldn't finish their comeback against Florida and finish the year with a program record-tying 29 wins.

"We just couldn't get over the hump against a team that slows it down. This one will hurt." — Cody Martin.

Florida: The Gators play No. 2 seed Michigan or No. 15 Montana on Saturday.

Nevada: The Wolf Pack go into next season off a two-year stretch of 58 wins, the best in school history.