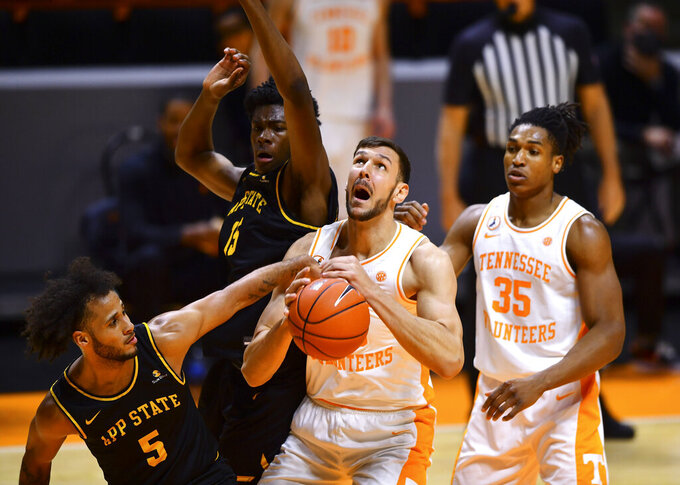 KNOXVILLE, Tenn. (AP) — Appalachian State shot just 28% and it still hurt Tennessee's season statistics. That says something about the way the No. 10 Volunteers are playing defense.

Tennessee (3-0), which came into the game holding opponents to 26% shooting, kept the Mountaineers (4-2) scoreless for the first 6:22 and coasted to a 79-38 victory Tuesday night.

Victor Bailey had 13 points to pace the Volunteers. John Fulkerson and Jaden Springer each scored 12, and Josiah-Jordan James added 11.

The 38 points were the fewest allowed in Barnes' six-year tenure with the Vols.

“We've never seen pressure like that,” said Appalachian State coach Dustin Kerns. “That team is really hard to score on. It's hard to practice against.”

After jumping out to a 13-0 lead, Tennessee was up 36-8 before the Mountaineers scored the last five points of the first half.

Appalachian State was led by Michael Almonacy with nine points.

Fulkerson had eight points in the first 20 minutes. Almonacy paced the Mountaineers with six.

James, a 6-foot-6, 207-pound sophomore, is the versatile part of the Tennessee lineup that Barnes is tinkering with.

“We're still learning a lot about ourselves,” Barnes said. “(James) has been working at the position.”

“It's real good for us when we're able to play small ball,” James said of his position change. “It gives us the opportunity to throw something different at the other team. It could be a weapon.”

Even as the lead got into the 30s, and ultimately reached 42, the Vols never took their foot off the gas. They took charges. They dove for loose balls.

“(The intensity) starts with the coaches,” Springer said. “We take that with pride. We can't let up.”

“There's a lot we don't do well,” James said. “We've got so much room to grow. We can't have any slipups or missed communication. We play the way we practice. It carries over into the game. There's no letup.”

Appalachian State: A Sun Belt Conference team led by a sophomore (Adrian Delph) and two freshmen (Kendall Lewis and Donovan Gregory), App State was focused on playing with the physicality it takes to compete with a Southeastern Conference power.

Tennessee: Between now and Dec. 30, when their SEC schedule opens with a trip to Missouri, the Vols have to become a strong rebounding team. They lost the battle of the boards against Colorado, then dominated Cincinnati by 10. Tennessee outrebounded the Mountaineers 45-27. Developing consistency is a key.

Appalachian State: In preparation for the Sun Belt schedule, which features back-to-back dates with the same opponent, the Mountaineers will face Greensboro College on Thursday and Columbia International on Friday.

Tennessee: When the Vols' home football game with Texas A&M was scheduled for Saturday, the basketball game against Tennessee Tech was moved from Saturday to Friday.