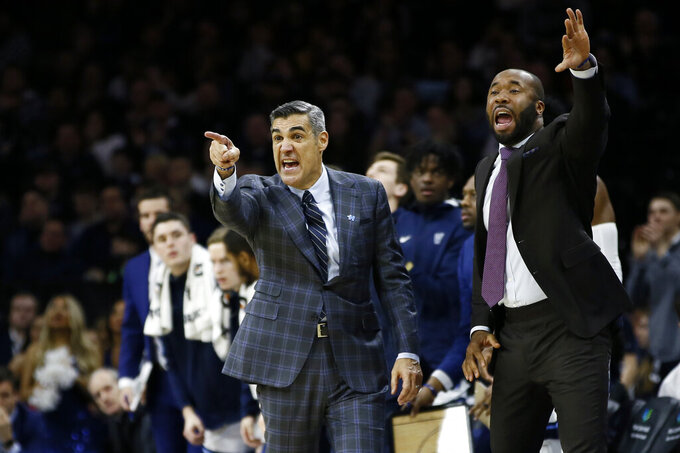 RALEIGH, N.C. (AP) — Villanova coach Jay Wright knows his 10th-ranked Wildcats have youth and inexperience that can lead to inconsistent play in some of the biggest games.

A recent loss offered a reminder that his team is still learning as it enters a tough week with two ranked Big East opponents.

First comes a trip to No. 19 Butler on Wednesday, followed by a visit from league-leading and 12th-ranked Seton Hall. Those games headline the week’s AP Top 25 schedule as college basketball claims the post-Super Bowl spotlight at the start of a roughly six-week run to Selection Sunday.

Villanova (17-4, 7-2 Big East) enters the week a game behind the Pirates despite Saturday’s loss at home to Creighton, which allowed the Bluejays to re-enter Monday’s poll at No. 21.

“It’s learning experience for this team,” Wright said afterward. “You have to know how to do that every night, and that’s what great teams do. Average teams play tough one night, don’t play the other night. Sometimes when you’re young, you have to lose a game to know that. I wish we didn’t.”

Villanova has freshmen or sophomores as three of its top four scorers in Saddiq Bey (15.0), Justin Moore (11.1) and Jeremiah Robinson-Earl (11.0). But the inability to make consistent stops was a common thread in losses to current No. 1 Baylor, Creighton, Ohio State and Marquette.

Those teams combined to shoot 50% overall and 46% from 3-point range, and they averaged 77.5 points with nine made 3s.

“It’s kind of our job as coaches to make sure we don’t have to lose a game to learn that,” Wright said of getting a young team to bring the same every-game edge. “We’ve got to take some responsibility, too.”

Auburn joined No. 9 Maryland in jumping a week-best six spots in the latest poll, climbing to No. 11 after a weekend win against Kentucky. The Tigers next travel to Arkansas before hosting No. 18 LSU on Saturday in another marquee Southeastern Conference matchup.

There are two other games featuring two ranked teams, both in a Big Ten that has a national-best five ranked teams.

The first comes Tuesday with No. 16 Michigan State hosting No. 22 Penn State. The other comes Friday with the ninth-ranked Terrapins visiting No. 20 Illinois.

Michigan State and Illinois entered the week tied atop the Big Ten standings.

Ranked teams play a total of 15 road games this week starting Tuesday, though three stand out as instate rivalry matchups.

Each comes Saturday. Tom Izzo’s Spartans follow their game against Penn State by traveling to Michigan after claiming the first meeting. Out West, No. 14 Oregon visits Oregon State in the Pac-12. And in the Atlantic Coast Conference, seventh-ranked Duke visits North Carolina in the renewal of the fierce rivalry between tradition-rich neighbors with a combined 11 NCAA Tournament championships.

Baylor started the week by strengthening its grip on the No. 1 spot, then extending its school-record winning streak.

The Bears (20-1) remained on top for a third straight week with 49 of 65 first-place votes, five more than the previous week. Later Monday, they won at Kansas State for their 19th consecutive win to remain unbeaten in Big 12 play.

The Bears next host Oklahoma State on Saturday.

It’s Tulsa, not No. 25 Houston or previously ranked Wichita State, leading the American Athletic Conference. Wins this week could inch Frank Haith’s Golden Hurricane (15-6) closer to the poll, first at home Thursday against Connecticut followed by Sunday’s trip to UCF.

Sitting a game behind No. 6 Dayton in the Atlantic 10, Rhode Island (16-5) has won eight straight entering games against Massachusetts on Tuesday and at George Washington on Saturday.