No. 10 Wisconsin succeeding at record rate in close games 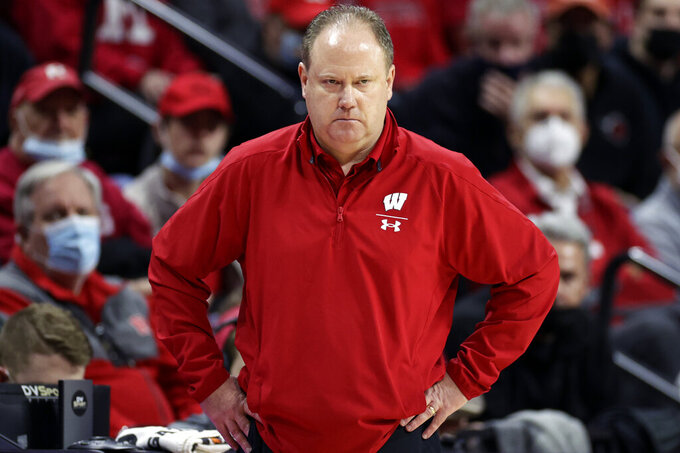 MADISON, Wis. (AP) — Wisconsin leads the Big Ten and has emerged as one of college basketball’s biggest surprises because of an uncanny ability to win close games.

The 10th-ranked Badgers have won their last 14 games that were decided by six points or fewer. Their only loss in such circumstances this season occurred on Nov. 15 when they fell 63-58 to No. 9 Providence while playing without national player of the year candidate Johnny Davis due to a lower-body injury.

Wisconsin's sports information department says this marks the first time since the introduction of the 3-point line in the 1986-87 season that a Division I team has such a long win streak in games decided by two scores or less.

The Badgers say they deliver in the clutch so consistently because of their togetherness and toughness.

Purdue coach Matt Painter said Wisconsin thrives in close games because of its ability to remain poised down the stretch. Wisconsin won 74-69 at Purdue on Jan. 3.

“The way they’re playing and the way they’re executing with 14 minutes in the game is the way they play with a minute to go in the game,” Painter said. “It’s nothing different at the end of the game. You want to put the ball in your best player’s hands, but you still want to be able to get an efficient shot, and they do a really good job of that. And they create a lot of extra possessions for themselves the way they crash the offensive glass.”

Wisconsin also has plenty of tenacity, which was evident early in the season.

“Some teams show (grit) early,” Wisconsin coach Greg Gard said. “Some teams have to get knocked around a little bit in order to be calloused up enough. This group showed some grit right from the start.”

Wisconsin opened its Big Ten schedule by matching the biggest comeback in school history, rallying from 22 points down to beat Indiana 64-59 at home. The Badgers own a 9-2 road record with the nine wins decided by a total of 43 points.

It’s worth noting that Wisconsin’s close wins haven’t all come against NCAA Tournament-caliber teams. The Badgers eked out four-point victories over Georgia Tech and Illinois State plus a three-point win over Nicholls. Each of those three teams is outside the top 150 in the NET rankings.

All those close calls could explain why some metrics don’t hold Wisconsin in particularly high regard.

The Badgers are 21st in the NET rankings and 27th in Ken Pomeroy’s ratings. In both those systems, Wisconsin is behind four Big Ten rivals: Purdue, Iowa, Illinois and Ohio State.

Wisconsin is a 90-1 shot to win the national title, according to FanDuel Sportsbook. Twenty teams have better odds of winning the championship.

“Toughness and grittiness, they don’t show up in analytics,” Davison said after the Rutgers game. “I know some coaches love analytics. When I’m a player, when I’m a coach someday, I will not look at analytics.”

The Badgers have been beating the odds all season.

Although the Big Ten doesn’t have a formal preseason poll, The Columbus Dispatch in Ohio and The Athletic conducted their own poll featuring a panel of two beat writers for each of the league’s 14 teams. Wisconsin, which had to replace four of its top five scorers from last season, was picked to finish 10th.

Davis’ rise to stardom is perhaps the biggest reason for Wisconsin’s surge, but the Badgers’ ability to win close games also has been critical. They attribute that success to pluck rather than luck.