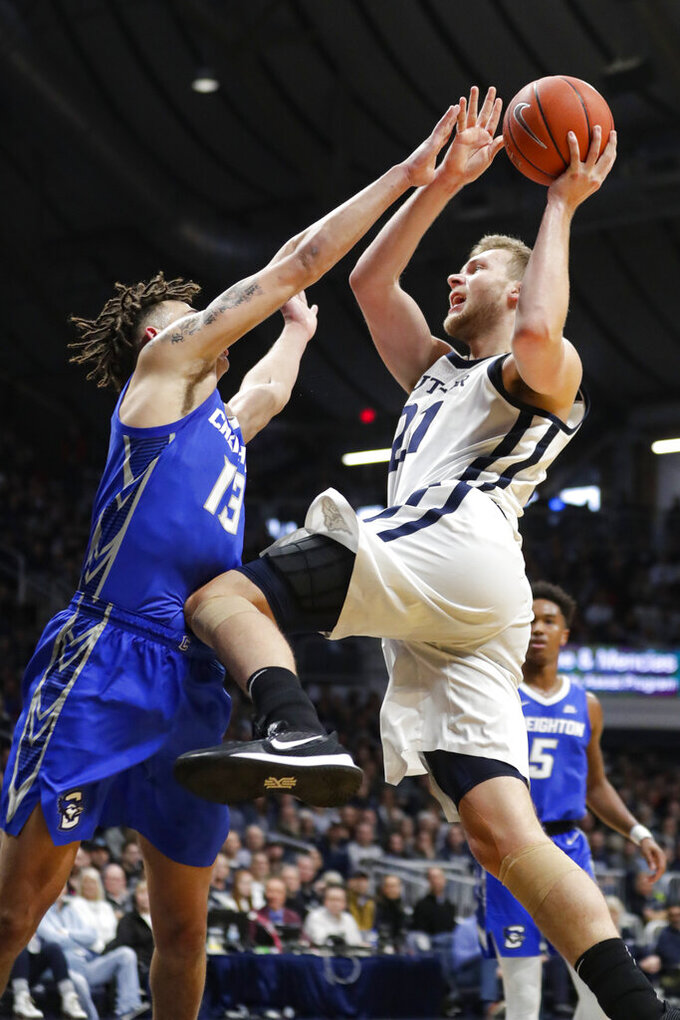 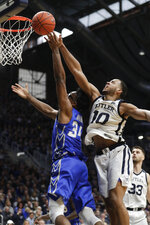 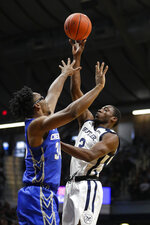 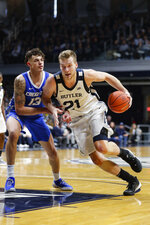 INDIANAPOLIS (AP) — Kamar Baldwin spent the first half Saturday adapting to Creighton's defense. He spent the second half shredding it.

The senior guard overcame an ankle injury and a rugged start to score 20 points in the final 20 minutes, leading No. 11 Butler to a 71-57 victory over Creighton.

“Just keep shooting, get to my spots," said Baldwin about adjusting after missing his first nine shots. “It was about not forcing it, playing within the offense."

Clearly, the Bulldogs (14-1, 2-0 Big East) needed their top scorer to play well against one of the nation's highest scoring teams.

But until an hour before tip-off, it wasn't even clear if Baldwin would play after leaving Tuesday night's conference opener in a walking boot.

So when he finished the first half with a stat line that read 0 for 9 from the field, 0 for 3 on 3-pointers, zero points, one foul and two turnovers, it seemed he had a built-in excuse. Apparently, the injury wasn't the issue.

“I think he was just adjusting to how they were playing," Butler coach LaVall Jordan said. “Everyone is going to have a different game plan for him and so it's a matter of adjusting.”

Creighton's approach was to run extra defenders at Baldwin, opening things up for the rest of the Bulldogs.

Sean McDermott took advantage by steadying Butler during a slow start. He finished with 18 points and a career high 11 rebounds.

Derrik Smits, the son of former Indiana Pacers star Rik Smits, also pitched in by making back-to-back baskets before spotting Henry Baddley slicing in for a dunk to start a 14-3 run that gave Butler a 24-12 lead midway through the first half. The Bulldogs never trailed again.

But when Creighton coach Greg McDermott tried to slow down the other McDermott, who is no relation, in the second half, Baldwin reasserted himself and stymied every run the Bluejays (12-3, 1-1) made.

When they cut the deficit to 43-38 with 14:43 left, Baldwin scored on a layup. When the Bluejays finally pulled within four with 9:18 to go, Baldwin answered with his only 3 of the game. And then Baldwin closed it out by scoring seven of Butler's last 11 points — snapping Creighton's eight-game winning streak.

“McDermott gives them the lead in the first half when Baldwin was struggling,” Greg McDermott said. “Then in the second half, we did a better job on McDermott and Baldwin gets away from us.""

Creighton: The high-scoring offense struggled, largely because of the Bluejays' inability to create good shots off of ball movement in the first half. And when that didn't work, Creighton's players couldn't create their own shots. The Bluejays were better in the second half but must continue improving to contend in a strong Big East.

Butler: This team doesn't rely exclusively — or even primarily — on 3-point shooting anymore. Instead, the Bulldogs are willing to grind out wins however they must. They don't give up many good shots and have just enough scoring balance to create headaches for opponents. The combination has allowed the Bulldogs to win five straight and move within three spots of matching their highest ranking in school history.

Creighton: Finished with its second-lowest scoring total of the season and its lowest scoring half, 24 in the first half, all season. ... Creighton shot 38.9% from the field, as just 4 of 22 on 3s and committed 13 turnovers. ... The Bluejays are 1-5 all-time against Butler when scoring fewer than 72 points. ... Ty-Shon Alexander finished with 11 points, seven rebounds and four assists.

Butler: Baldwin wound up 7 of 22 from the field and 1 of 8 on 3s with three rebounds, one assist and two turnovers. ... It has held 11 of 15 opponents to fewer than 60 points this season. ... Aaron Thompson had 10 points and Bryce Nze added nine points and seven rebounds. ... The Bulldogs have allowed 18.2 points in the first half of their last five games.

Creighton: “I've watched a lot of basketball over the 37 years I've been doing this and there aren't many teams I've seen as connected, on both ends of the floor, as they are," McDermott said.

Butler: “I keep telling these guys I'm waiting for us to play well for 40 minutes," Jordan said. “I think we're getting closer."

Creighton's McDermott will try to pick up win No. 500 Tuesday when the Bluejays host No. 10 Villanova.

Butler hopes to keep its winning streak intact at Providence on Friday.