No. 11 KU without McCormack, Enaruna for Big 12 tourney 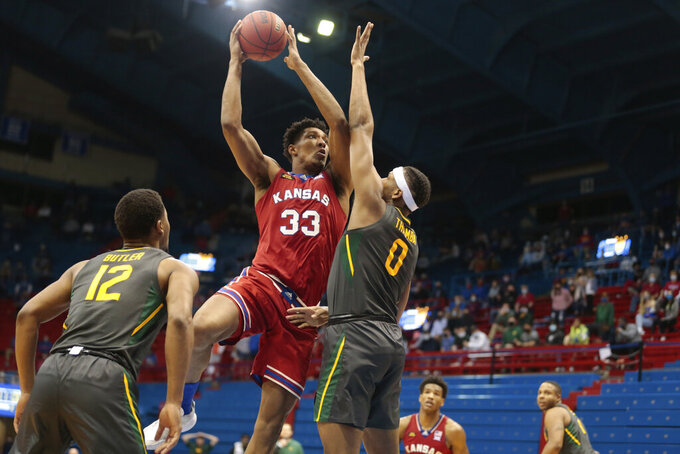 LAWRENCE, Kan. (AP) — Kansas will be without starting center David McCormack and backup forward Tristan Enaruna for the Big 12 Tournament due to COVID-19 protocols, though the No. 11 Jayhawks hope to have both players back for next week's NCAA Tournament.

Jayhawks coach Bill Self said Tuesday the pair entered the protocol “semi-recently" but did not say whether either tested positive for the virus. McCormack is averaging 13.4 points and 6.1 rebounds and Enaruna plays sparingly off the bench.

The second-seeded Jayhawks open tournament play in Thursday's quarterfinals against No. 25 Oklahoma or Iowa State.

“It does change a lot,” Self said, “because as you guys know, we've actually gotten better playing through David the second half of the season, and he’s had a really good last 10 to 15 games. He’s been really good for us. So that’s different.

The Big 12 Tournament figures to be one of the toughest in the country with seven of the 10 teams ranked in the Top 25, headlined by second-ranked Baylor and No. 10 West Virginia. Oklahoma State, Texas and Texas Tech also are ranked.

Yet the Jayhawks (19-8) felt confident heading to Kansas City, Missouri, after winning seven of their last eight games with the lone setback coming at Texas in overtime. That streak included handing the Bears their only regular-season loss, a game in which McCormack poured in 20 points before fouling out in the final minutes.

The junior center has scored in double figures in 11 of his past 12 games with three double-doubles.

Kansas was among a few schools to play the entire regular season without any COVID-19 problems. Its only game postponed or canceled was against Tarleton State, when an outbreak within the Texans program caused a cancellation.

“It stinks, especially for those two, without question,” Self said. “But I do see this as an opportunity for some others. And of course I'd much rather play with our full complement of guys, no question, and especially in a league that's this good because you've got to beat three great teams in order to win it. You got to beat three great tams. But the bottom line is this week's important but it's still not as important as next weekend.”