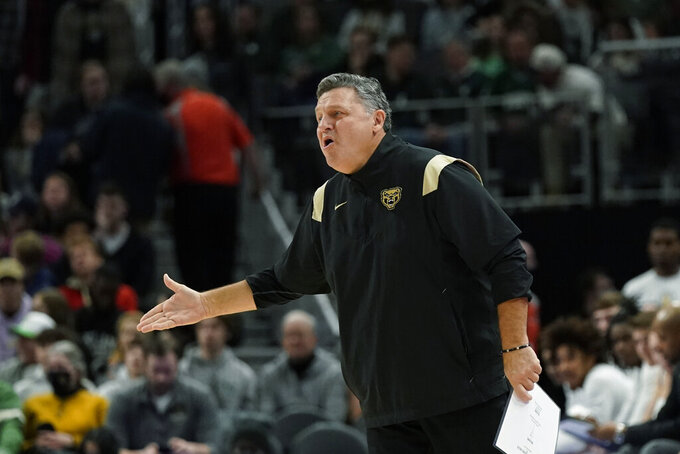 Oakland head coach Greg Kampe yells from the sideline during the first half of an NCAA college basketball game against Michigan State , Tuesday, Dec. 21, 2021, in Detroit. (AP Photo/Carlos Osorio) 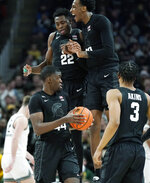 The freshman guard followed up his strong start with a pair of two-point games and was held to single digits five times in a seven-game stretch.

Christie heated up after cooling off, scoring 17 points and making a season-high four 3-pointers to help the 11th-ranked Spartans beat Oakland University 90-78 on Tuesday night in their first game in more than a week.

“The break certainly helped so I could reset myself," he said. “When I hit those first shots, it felt really good."

The Spartans (10-2) have won five straight for a second time this season, bouncing back from losses to then- No. 3 Kansas to open the season and then- No. 6 Baylor last month.

“I still think we have a tremendous upside," coach Tom Izzo said.

The Golden Grizzlies (7-4) lost consecutive games for the first time this year in a season that includes a win over Oklahoma State.

Oakland University hosted the game at Little Caesars Arena, which was nearly filled with fans cheering for both teams.

“How can you beat that?" coach Greg Kampe asked. “College basketball in Detroit with two really good programs."

Michigan State led 44-35 after a first half of swings that included the Spartans leading by as much as 12 and clinging to one-point leads. Oakland fell behind by 16 in the second half, but refused to get routed and pulled within single digits late in the game.

Michigan State's Gabe Brown scored 14, Malik Hall had 13 points and finished the game with a bandage covering stitches above his right eye. Northeastern transfer Tyson Walker fouled out with 10 points and a career-high matching 10 assists for the Spartans.

“That will be a big step up in the right direction for him," he said.

Oakland coach Greg Kampe was called for a technical in the first half, arguing that goaltending should have been called.

“It was goaltending and in a game like this, you can’t miss that," Kampe said. “Did it swing the game? Maybe. If it did, then I feel really bad about it, but if it happened again tomorrow, I would’ve done the same thing. I didn’t think I should’ve gotten a technical. I’m sure Tom didn’t think he should’ve gotten one."

Izzo was called for a technical in the second half after screaming at officials, then he fired up the crowd at Little Caesars Arena.

Walker went to the sideline to help Izzo stay in the game by avoiding a second technical.

“It just shows you how much closer we’ve gotten," Walker said. “I can be the one to tell him to calm down a little bit.

Michigan State: Izzo's team played its first game in 10 days after tipping off 11 times in a 33-day stretch to start the season. The Spartans will have more than a week off before their next game, giving them plenty of time to practice and rest before the Big Ten season resumes.

Oakland: Cain gives the Grizzlies a chance to win a lot of games, and perhaps the Horizon League championship. The Marquette transfer scored 13 points and missed just two shots in the first half against a team that was allowing opponents to make just 38.4% of their shots.

“He's a pro, and in our league, a pro is going to do really well," Kampe said.

Christie said the Spartans focused their defensive efforts on Cain, who made half of his 14 shots.

“On the scouting report, he was No. 1 for sure," Christie said. “For the most part, we made him take some tough shots."