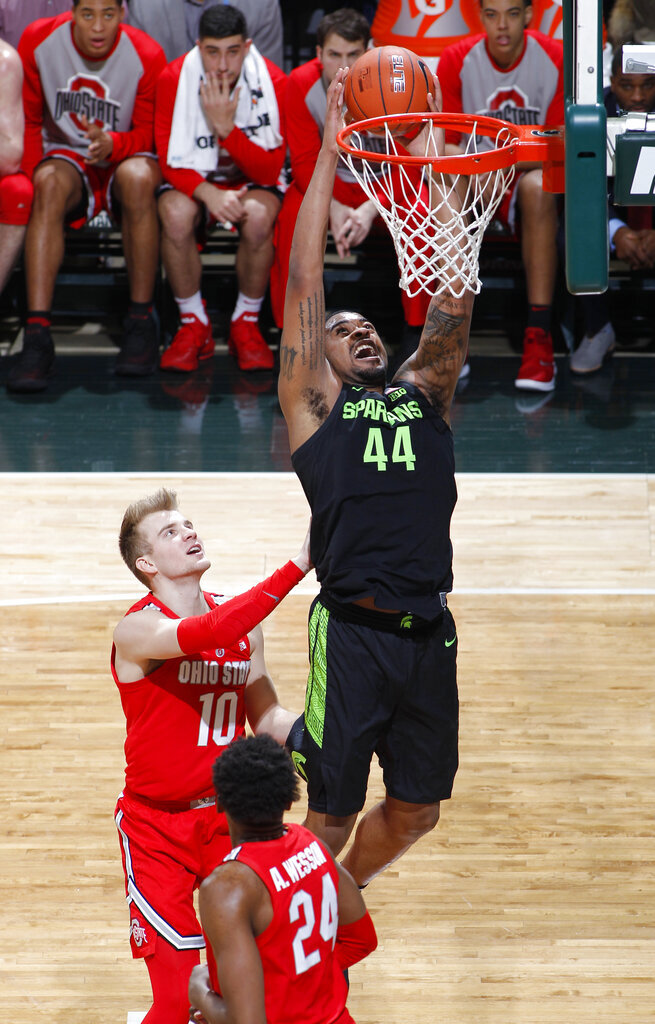 Michigan State's Nick Ward (44) goes up for a dunk against Ohio State's Justin Ahrens (10) and Andre Wesson (24) during the first half of an NCAA college basketball game, Sunday, Feb. 17, 2019, in East Lansing, Mich. (AP Photo/Al Goldis) 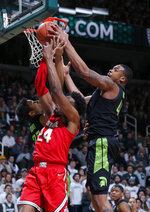 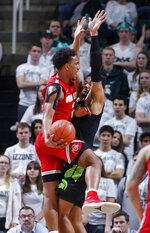 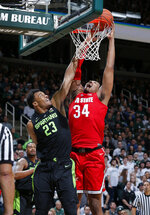 EAST LANSING, Mich. (AP) — Michigan State shut down Ohio State in the second half despite an injury to Nick Ward.

Now the Spartans may be without their standout big man for a while.

Ward left in the second half with a broken left hand, but No. 11 Michigan State still rolled to a 62-44 victory over Ohio State on Sunday. The Spartans held the Buckeyes to only 13 points in the second half. Coach Tom Izzo initially said Ward might have dislocated a finger, but the school announced that the 6-foot-9 junior has a hairline fracture.

Michigan State hopes Ward will be able to return before the end of the season. Next weekend, the Spartans play the first of two big games against rival Michigan.

"Defense not only travels — sometimes it works at home too," Izzo said.

Kenny Goins had 10 points and 10 rebounds for Michigan State, which finished the game with a 20-2 run. Matt McQuaid scored 14 points for the Spartans and Cassius Winston added 13.

"It was all on defense," McQuaid said. "We weren't getting clean rebounds in the first half. We did a better job in the second of securing the ball and running."

It was tied at 42 when Michigan State's Kyle Ahrens sank a 3-pointer that started a 10-0 run.

The teams combined for 58 free throws when the Spartans won at Ohio State last month. There were only 21 on Sunday, but there was no shortage of physicality inside.

"I'm not used to getting fouls anyway," Wesson said. "I get fouled almost every possession if you look at the film."

Ohio State: A win would have done quite a bit to boost Ohio State's NCAA Tournament hopes, and the Buckeyes certainly were in decent shape after 20 minutes. But a dreadful second half left Ohio State well short of an upset.

Michigan State: It was a convincing home victory for the Spartans, but Ward's injury could be a problem going forward. Only three Michigan State players have scoring averages in double figures this season, and two of them are now injured. Joshua Langford is out for the season because of ankle problems.

Goins scored all 10 of his points in the second half and was impressive on both ends of the court.

The game was tied at 39 when Michigan State went with a lineup of Goins, McQuaid, Ahrens and freshmen Foster Loyer and Thomas Kithier. Ward was out, Tillman had four fouls and Winston was getting some rest.

When Winston came back in, the Spartans were up 50-42.

C.J. Jackson made a 3-pointer to tie the game at 42, but Ohio State went the final 7½ minutes without a field goal. In that span, the Buckeyes had only five shot attempts from the field and turned the ball over six times.

The Spartans have won three straight after a three-game losing streak, and they'll likely move back into the top 10.

Ohio State: The Buckeyes are back home against Northwestern on Wednesday night.