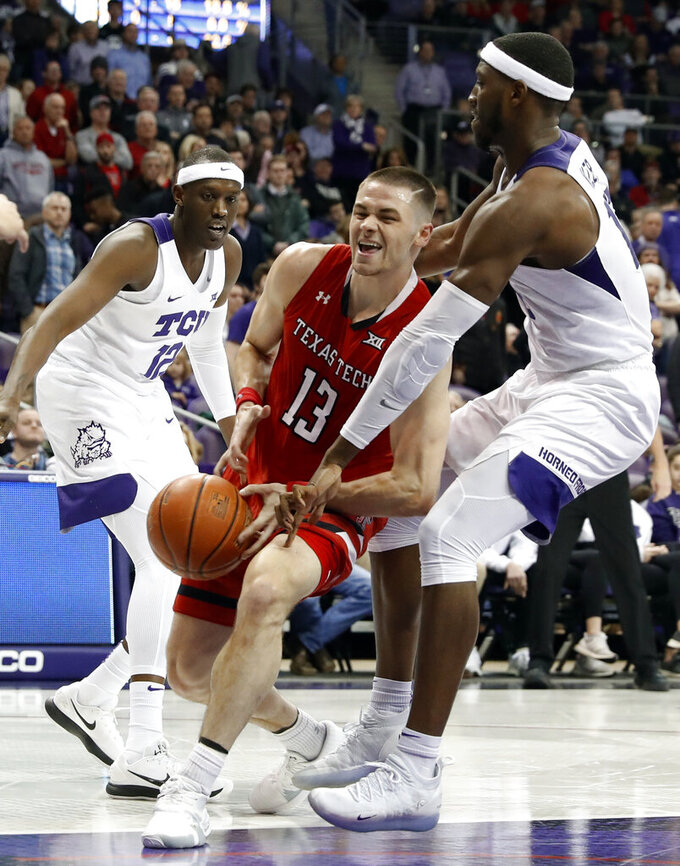 TCU forward Kouat Noi watches as forward JD Miller, right, strips the ball away from Texas Tech guard Matt Mooney (13) on a drive to the basket in the first half of an NCAA college basketball game in Fort Worth, Texas, Saturday, March 2, 2019. (AP Photo/Tony Gutierrez) 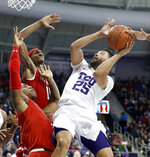 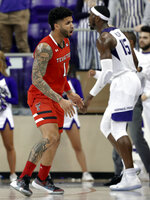 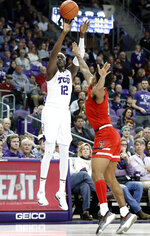 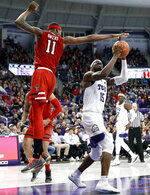 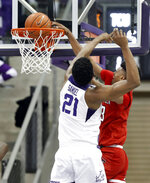 FORT WORTH, Texas (AP) — When Texas Tech guard Jarrett Culver wasn't getting much space to score early on, he got the ball to his teammates. He also had some big defensive plays for the 11th-ranked Red Raiders.

Culver had assists on three consecutive baskets before his second steal in that spurt led to the final field goal in an 11-0 run that got the Red Raiders started on a much-bigger spurt. They went on to win their seventh game in a row, staying in a tie for the Big 12 lead after beating TCU 81-66 on Saturday.

"I felt Culver let the game come to him," coach Chris Beard said. "He said, 'Hey, I'm going to have 10 assists tonight.' I reminded him that we need him to score from time to time."

Culver scored 15 points while also finishing with seven assists and five steals, both season highs. Davide Moretti also had 15 points for the Red Raiders (24-5, 12-4 Big 12), who had five players score in double figures.

"We were sharing the ball, we were pressing," Moretti said of what worked in the first half. "JC (Culver) made some high-level passes and we were hitting shots."

The Red Raiders surpassed their school record of 11 Big 12 wins set last season when they were the league runner-up and went to the NCAA Elite Eight for the first time in school history.

JD Miller had 18 points to lead TCU, while Alex Robinson had 17 and Kouat Noi 15.

Culver, the reigning Big 12 player of the week, had the three consecutive assists and two steals midway through the first half when the Red Raiders scored 11 in a row to start the 25-4 run that put them ahead by 23.

After assisting on a 3-pointer by Corprew, Culver passed across the court to Brandone Francis for a long jumper. Culver than had a steal and shared a couple of passes before Francis scored on a breakaway layup. Another steal by Culver led to another layup by Francis that made it 22-9.

"I think you guys saw that we play the game about as well as you can play it for spurts, then we just have some spurts that make no sense," Beard said.

TCU was within 43-35 when Robinson drove for a reverse layup to cap the 10-0 run to start the second half. The Red Raiders had three turnovers in a 75-second span during that stretch.

But when the Frogs closed the gap to seven points, the slimmest after the break, Tech scored eight quick points — Corprew had a 3-poitner and a layup before Mooney hit a 3.

"At least I was happy we came out in the second half ... did some things, got a little bit better movement, better defensively. But dug too big a hole," TCU coach Jamie Dixon said. "Cut it to seven, and then they came right back and hit a couple of shots. But open shots. That's on us."

Texas Tech: The Red Raiders had a double-digit halftime lead for the eighth time in their last nine games, and the 43-25 lead at TCU was plenty. Tech had plenty of support from red-clad fans who were often louder than the TCU fans.

TCU: The fourth loss in five games certainly doesn't help TCU's chances of going to the NCAA Tournament for the second year in a row after ending a two-decade drought last season. ... The Horned Frogs will have a losing record in Big 12 play for the sixth time in seven years since joining the league. They were a program-best 9-9 last season.

"In our minds, we're playing for an NCAA Tournament (bid)," Dixon said. "I still believe in our team. ... We can play better and that's what we're going to do forward."

Texas Tech plays its home finale Monday night against Texas, then finishes the regular season next Saturday at Iowa State.