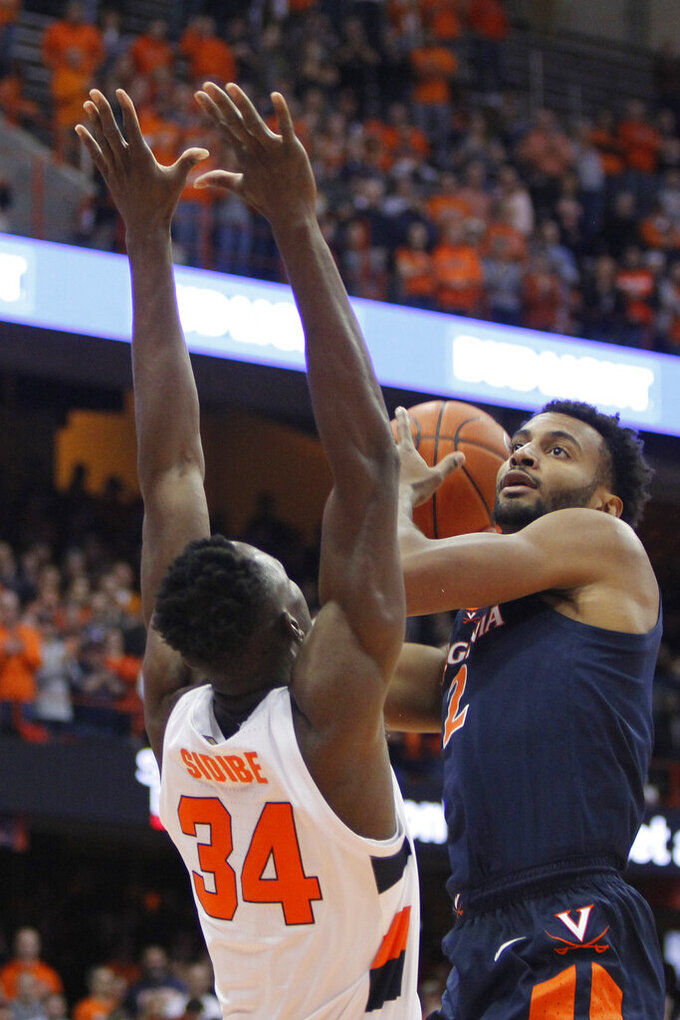 SYRACUSE, N.Y. (AP) — Virginia picked up right where it left off in April — showcasing its Pack-Line defense in impressive fashion.

"I know we have to be good defensively. That will be very significant for how good we can be," Virginia coach Tony Bennett said. "I think our team understands how important that aspect will be. It starts with willingness. If there's no willingness, then you're wasting your time, and there's willingness by the coaching staff and here's purpose and buy-in by the young men."

The Cavaliers became the first reigning NCAA champion to start the next season with a true road game since UCLA opened the 1967-68 season at Purdue. The Cavaliers have a 12-game winning streak in ACC openers and are 11-0 in ACC openers under Bennett.

Virginia held the Orange to 68 or fewer points in each of the previous eight meetings between the teams and this one followed form, and then some, against a team that gave four freshmen nearly 50 minutes of playing time. They finished 2 of 13 from the floor.

"It's hard," said Elijah Hughes, the only Syracuse player in double figures with 14 points on 4-of-14 shooting. "They've got guys that guard the ball. They've got shot blockers. It's really hard to get in a rhythm. He (Bennett) makes it difficult every year. They're coming off a national championship. They're just really good at what they do."

Virginia also outrebounded Syracuse 47-28 as the Orange fell behind early and never managed to stage any sort of comeback. It marked the first time the Orange hadn't scored 40 points since 2013 at Georgetown (39).

"I thought they'd be better defensively than they were last year," Syracuse coach Jim Boeheim said. "I think they're maybe better, or at least as good. We could get by them a little bit last year, we couldn't this year. They're one of the few teams that can do that to you."

Syracuse lost the bulk of its scoring with the early departures of Tyus Battle and Oshae Brissett and Frank Howard, who exhausted his eligibility. Hughes is the lone returning starter.

"Right now, our offense isn't good enough to play against that defense," Boeheim said. "They're too physical, too strong. They just take you out. The shots we got were tough. Our defense was respectable."

Clark had 10 points, 11 rebounds, and seven assists for the Cavaliers.

The rust from the offseason was on full display in the first 10 minutes as Virginia gained a 10-2 lead despite hitting just 1 of 7 shots from behind the arc. The Orange started 1 for 13, including five missed 3s, the only make a layup by Bourama Sidibe that gave them a 2-0 lead. Syracuse trailed 25-19 at halftime, matching the team record for fewest points in a half since the Carrier Dome opened in 1980. They shot 7 of 27 (25.9 while the Cavaliers were 11 of 24 (45.8 percent), all but one of their misses from long range.

Syracuse freshman guard Joe Girard III, New York state's all-time leading scorer in high school, scored his first points for the Orange with a 3-pointer from the top of the key, the ball bouncing high off the back of the rim before dropping through the net late in the first half.

CARMELO IN THE HOUSE

Former Syracuse star Carmelo Anthony, who as a freshman led the Orange to their lone national championship in 2003, made a rare appearance in the Carrier Dome since his departure after the championship season. Anthony, who was greeted by chants of Melo! Melo! Melo!, had his number retired in 2013 and also appeared in 2009 for the opening of the team's main practice facility, which bears his name.

Virginia: The Cavaliers don't have that outside presence from last year, but their stiff defense looks in good form early.

"Our mindset is simple," Diakite said. "We score and we don't allow anyone to score on us. And if you're scoring on us then it has to be tough, tough shots all night."

Syracuse: The Orange are a work in progress. Point guard remains a key — the Orange had only seven assists.

Virginia hosts James Madison in non-conference action on Sunday. The Cavaliers, who will play 13 games against 2019 NCAA Tournament teams, will meet either Arizona State or St. John's in the Air Force Reserve Tip-Off Tournament on Nov. 24.

Syracuse continues its season-opening homestand with four more games, including Cornell, whose leading scorer after one game was coach Boeheim's oldest son Jimmy. The Orange finish the stand against Bucknell in the NIT Season Tipoff before traveling to Brooklyn to meet Oklahoma State at the Barclay's Center.