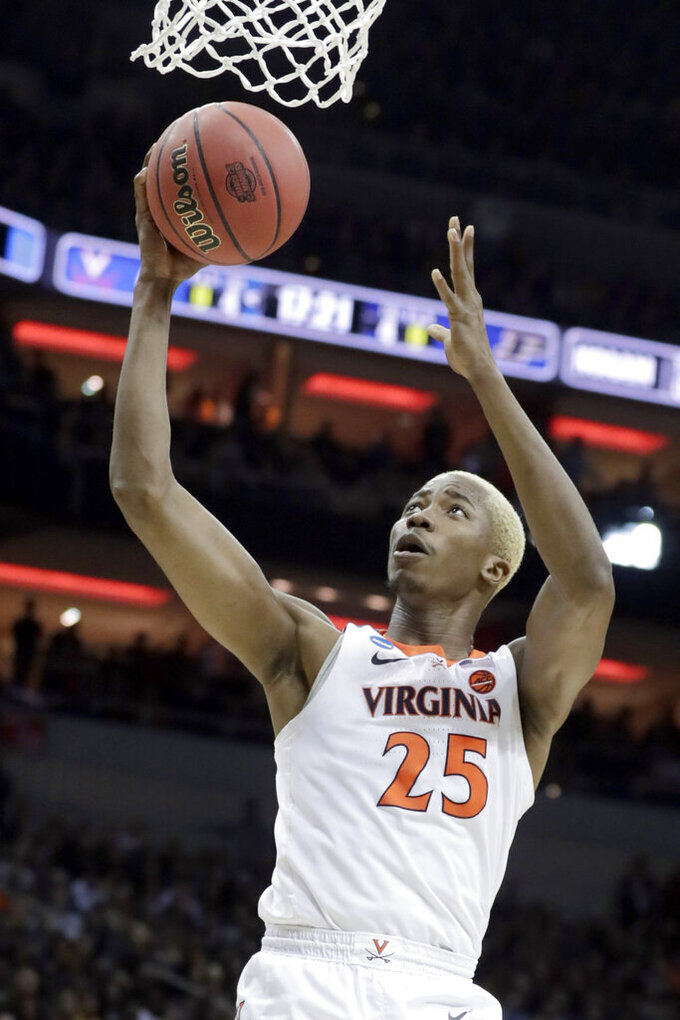 In this March 30, 2019, photo, Virginia's Mamadi Diakite (25) shoots during the first half of the men's NCAA Tournament college basketball South Regional final game against Purdue in Louisville, Ky. Diakite was a huge part of the win, but he's still driven by The Loss. The 6-foot-9 redshirt senior says he will never forget, or cease to be driven by, Virginia’s loss to UMBC as the first No. 1 seed in NCAA Tournament history to lose to a No. 16 seed. The defending national champions are young this season, but Diakite says they have some surprises in store. (AP Photo/Michael Conroy, File)

CHARLOTTESVILLE, Va. (AP) — Mamadi Diakite smiles, like he knows something others don't.

The The 6-foot-9 Virginia redshirt senior from Conakry, Guinea, Africa, sporting a bit of blonde hair, embraces that the defending national champions are picked to finish fourth this season in the Atlantic Coast Conference. Only 12 of 111 voters in the preseason poll picked the Cavaliers to repeat, and that helps fuel the Cavaliers' leader.

"It makes me smile a lot because I've been ... through a lot of up and downs," said Diakite, entering his fifth season with Tony Bennett and the Cavaliers. "UMBC, the final championship, so it's cool. I like it."

The No. 11 Cavaliers open their season Wednesday at Syracuse, a team that has been a challenging matchup for Virginia.

A role player throughout his career at Virginia, Diakite assumed a bigger role last year as the Cavaliers won their first national basketball championship. Their title run came just a year after the Cavaliers suffered an historically embarrassing defeat when they lost to UMBC and became the first No. 1 seed to lose to a No. 16.

Virginia wasn't just a No. 1 seed; they were the No. 1 overall seed, adding to the indignity.

The UMBC loss is a memory that drove the Cavaliers last season, and might continue to drive players who were a part of the upset.

"I'm carrying that underneath my skin," Diakite said earlier this offseason.

Last season, in an Elite 8 matchup with Purdue — a game in which the Cavaliers' vaunted defense had been torched for 10 3-pointers and 42 points by the Boilermakers' Carsen Edwards — it was Diakite who took a pass from Kihei Clark and made a short jumper to force overtime in an eventual 80-75 victory.

The play forever linked Clark, then a freshman, and Diakite in Virginia lore, and they are linked again this year.

Clark, though, is confident that Diakite, who grew up playing soccer and only discovered basketball when he kept growing, has shown the athleticism and commitment to the game that will surprise people.

"He's got a lot of offensive tools. I mean, when he gets the ball in the post, he's got a variety of moves that he can do," the sophomore point guard said. "He's just ready to show the fans and everybody else what he can do. I think he's definitely determined."

And getting noticed. Despite his lack or experience, Diakite is a first-team selection on the ACC's preseason all-conference team.

Diakite is fully aware that basketball could be his future.

He followed his three early departure teammates in applying for the NBA draft after last season, then opted to return to Virginia. That doesn't mean Diakite won't ever get to the NBA. Bennett and his staff have overcome a defense-first reputation to help several players get into the league, including rookie of the year Malcolm Brogdon, Joe Harris, who played for Team USA in the FIBA World Cup basketball tournament this summer, Justin Anderson and Mike Scott.

Diakite may be featured more offensively this season with Bennett planning a more inside-based offense this season. And that suits the senior just fine.

For Virginia, that totally depends on how much more Diakite can provide this season.