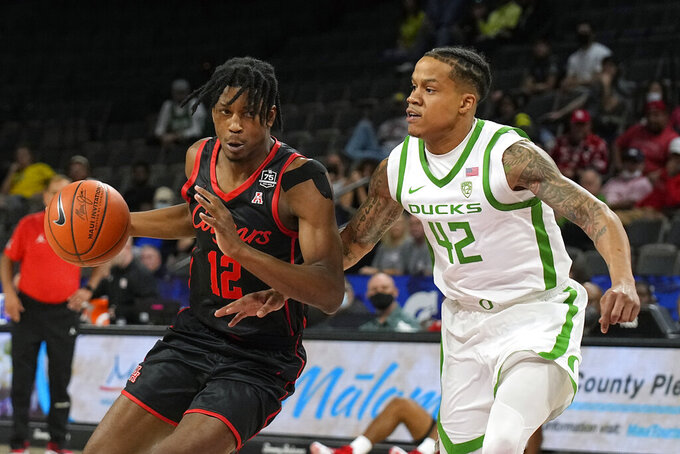 LAS VEGAS (AP) — Houston finally played a full game at the Maui Invitational. It was too late to win a championship, but it did send the Cougars out on a good note.

The Cougars (5-1) smothered the Ducks with defensive pressure and pushed them around inside to lead by 34 early in the second half. Houston had a 40-22 advantage in the paint and snagged 11 offensive rebounds to finish 2-1 in the relocated Maui Invitational.

The Ducks (3-3) had another disjointed day on offense, unable to get out in transition or solve Houston's swarming half-court defense. Oregon shot poorly early to fall into a big hole and had 19 turnovers that led to 29 Houston points.

Eric Williams Jr. had 13 points to lead the Ducks, whose only win in the Maui Invitational was against Division II Chaminade.

“We have a long ways to go,” Oregon coach Dana Altman said. “How we have regressed in the last two weeks just shocks me.”

The Maui-in-Vegas third-place game featured two teams that were expected to reach the title game.

Houston had been working on a strong follow-up to last year's Final Four run, winning its first four games before being tripped up by Wisconsin in the semifinals. The Cougars got off to an ugly start — the Badgers scored the first 13 points — and saw their rally come up short in a 65-63 loss.

Oregon was embarrassed by BYU last week but bounced back with a lopsided win over Chaminade, the tournament host. The Ducks stumbled again in the semifinals, falling into a 16-point hole before losing to Saint Mary's 62-50.

Houston got its groove back. Oregon did not.

The Cougars were sharp at both ends, building a 10-point lead in the first 4 1/2 minutes and bullying Oregon in the paint to lead 41-19 at halftime.

“Yesterday, we didn’t play to our culture, both halves,” Sasser said. “Today, we tried to come out the first four minutes playing to our culture, being at a high level rebounding, moving the ball on offense and just as a team on defense.”

The Ducks were discombobulated by Houston's defensive pressure, making just six shots in the first half. They also had 11 turnovers, several on fumbled dribbles or passes that sailed into the stands.

Little changed in the second half. The Cougars scored the first 12 points and held Oregon without a field goal for the opening 6:01.

The Ducks finally got some shots to start falling late — far too late.

“Something has gotten in our heads,” Altman said. “We want to take it upon ourselves, because of that, our ball movement is bad. Then after that, we lose our defensive energy because the ball isn’t going in the hole.”

Altman's teams typically get better as the season goes along. Oregon has a long way to go, particularly on the offensive end.

Houston had a hiccup in the semifinals but showed in its two wins it can still be an elite defensive team.