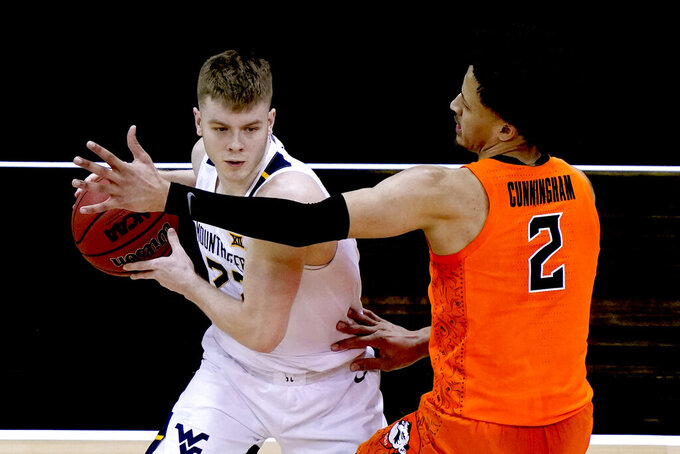 West Virginia's Sean McNeil is pressured by Oklahoma State's Cade Cunningham (2) during the first half of an NCAA college basketball game in the second round of the Big 12 Conference tournament in Kansas City, Mo., Thursday, March 11, 2021. (AP Photo/Charlie Riedel) 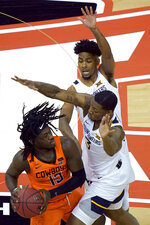 It wasn't any easier with Big 12 player of the year Cade Cunningham and veteran guard Isaac Likekele back from injuries.

In a back-and-forth Big 12 Tournament quarterfinal showdown, the No. 12 Cowboys escaped with a 72-69 victory over the No. 10 Mountaineer. West Virginia guard Sean McNeil's tying 3-pointer left his fingertips a split second after the final buzzer — splashing through the net in vain as Oklahoma State players flooded the floor to celebrate.

“Any win at this time of the year, we'll take,” said Cunningham, who hurt his ankle in a late-season loss to Baylor. “We still competed and we grinded out a victory. We know we'll have to play better, for sure, if we want to make it as far as we plan on going, but we're not going to get down on a win."

Cunningham and Avery Anderson III scored 17 points apiece for the fifth-seeded Cowboys (19-7), who have won seven of their last eight games — including two against the Mountaineers. Likekele and Bryce Williams each added 10 points to help the Cowboys reach the semifinal round against the top-seeded Bears or No. 9 seed Kansas State.

“We made mistakes for sure, plenty of them,” Cunningham said, “but we fought through it.”

Taz Sherman had given No. 4 seed West Virginia (19-8) a 69-68 lead with his 3-pointer with 1:12 to go, but Anderson hit at the other end for Oklahoma State. The Mountaineers missed a chance to retake the lead when Miles McBride and Emmitt Matthews missed near the bucket, and Williams hit two free throws with 21.3 seconds left to extend the lead.

The Mountaineers called a timeout and drew up a play to get Sherman an open 3 from the corner in the final seconds. But he was closely guarded and misfired, and the ball found its way to McNeil on the wing. He pump-faked to get his defender in the air, and the moment it took to do that cost him a chance at the winner.

The buzzer sounded by the time McNeil released his own 3 and it splashed through the net.

“Games never come down to one play,” McBride said, “but if it's one second earlier, we're looking at a different story.”

The teams split their regular-season meetings, with West Virginia rallying from 19 down to win in Stillwater and Oklahoma State edging the Mountaineers last week in Morgantown without Cunningham or Likekele.

Made sense that they would play another nip-and-tuck affair in the Big 12 Tournament.

Both teams were sloppy at the start, and neither gained separation until an awful final minute of the opening half for the Cowboys. A series of turnovers allowed West Virginia to score a couple of breakaway buckets and take a 36-30 lead at the break.

The Mountaineers were still in control until Williams hit a 3-pointer with 12:25 to go, triggering a 14-point run interrupted only by McBride's lone free throw. West Virginia coach Bob Huggins called a timeout to try to slow it down, but Likekele and Anderson responded with breakaway buckets to keep it going.

The Cowboys' lead reached 64-54 with 5 1/2 minutes to go before Sherman got involved.

The Mountaineers' senior guard followed back-to-back 3-pointers with another basket, pulling back almost all of their deficit in a matter of 90 seconds and setting up a frantic final few minutes and dramatic final seconds.

“We can sit here and talk about this and that; how about the effort that our guys gave?” Huggins asked. “I thought our guys gave a great effort. We had the one period of time where we just kind of let down a little bit — threw the ball to them, didn't get back in transition, didn't rebound the ball. But other than that, I don't know what else you can ask of them.”

Oklahoma State got back Cunningham from an ankle injury sustained against Baylor, and Likekele was back after missing a series of games with a nagging foot injury. Both played a big role: Cunningham committed six turnovers but also had eight boards, and Likekele had seven rebounds and three assists.

West Virginia couldn't overcome 15 turnovers while the Cowboys managed to survive 20 of their own. The Mountaineers also struggled to get baskets in the paint, resorting to outside shooting as they tried to come back down the stretch.

The Cowboys await their opponent in Friday night's semifinal round.