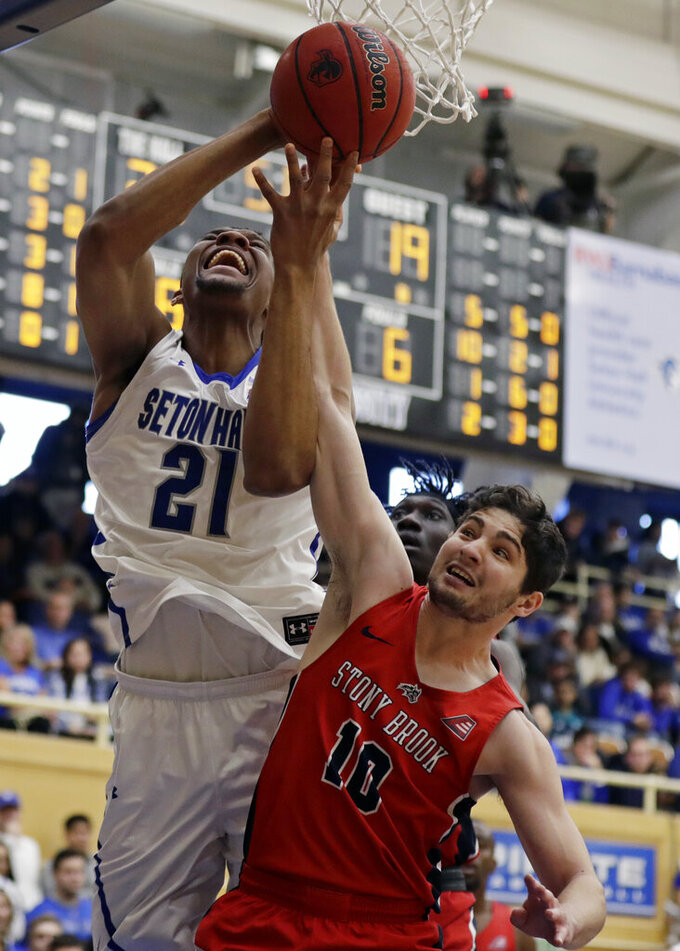 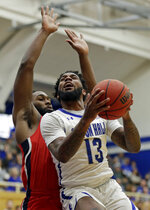 SOUTH ORANGE, N.J. (AP) — Seton Hall welcomed back its coach, but lost Myles Powell for the foreseeable future after he sprained his ankle.

Romaro Gill had 10 points and 10 assists while Sandro Mamukelashvili scored 17 points as the 12th-ranked Pirates withstood the injury to Powell and beat Stony Brook 74-57 in a game that marked the return of coach Kevin Willard.

Powell, the Big East preseason player of the year and an Associated Press preseason All-America selection, sprained his left ankle five minutes into the game and didn't return. Afterward, Willard said Powell was undergoing X-rays on a "serious" ankle sprained that "might be a prolonged absence."

"I thought we did OK at first, and then when the news trickle down the bench that he wasn't coming back I just think everyone kind of understood if as tough as he is if he's not coming back, he had to be hurt and I think that kind of shook us a little bit," Willard said. "And in the second half I think everyone kind of understood what they needed to do and did what they needed to do."

"It affected us a lot," McKnight said of Powell's injury. "All-American, Big East Preaseason Player of the year, guy who scores 25-plus points for us, yeah, it's hard when he goes down that early and it's only the second game of the season. Nobody thought that would happen, so that happened and it kind of took the energy out of our team.It just took us out of our whole rhythm."

Willard sat out one exhibition game as well as a season-opening 105-71 victory over Wagner.

"Actually, watching on TV last was much easier than this," Willard quipped. "It was hard. The hardest thing was not being able to communicate with the guys you know they shut you down and you have no communication, you're not allowed to do anything...I still did practices, but for 24 hours I was dark, and it's hard because you want to text your guys, your players, your staff, and that was the hardest part."

The two teams would trade leads in the second half until Gill gave Seton Hall a 44-42 advantage. Gill also gave the Pirates their first double-digit lead of the game at 62-51 with 4:17 left on a putback dunk following a missed layup by McKnight.

"We always know what Myles can do," Mamukelashvili said. "I feel like in this game we saw how much we can affect the team and how much other players can do to help us, rotate. It was amazing. Of course, I'm upset for Myles. I want him to back for the Michigan State game because without him, we're not as strong."

Stony Brook: The Seawolves are coming off a 24-win campaign in which they led the nation in road wins and finished second in the America East Conference. They're playing for a new coach in Geno Ford, who served as the Seawolves' interim coach for their CBI appearance last season after Jeff Boals left to take over Ohio's program.

Seton Hall: Things start to ramp up for a season of expectations for the Pirates as they face No. 1 Michigan State on Thursday. While Michigan State will no longer be ranked No. 1 after a season-opening loss to No. 2 Kentucky, both teams should be ranked in the top 15. That game will feature a couple of AP preseason All-America guards facing off if Powell's ankle allows him to play and match up with Michigan State's Cassius Winston.

Ike Obiagu sprained his ankle in the season-opening win vs. Wagner and missed today's game, but Willard said he expects him back vs. Michigan State.

Seton Hall will move from the 1,655-seat Walsh Gymnasium for the season and final men's basketball game in the current iteration, as the historic gym built in 1941 is scheduled to undergo a renovation beginning in April 2020 to include new seating, new court and new center-hung scoreboard. The Pirates play the rest of their home games at the 18,711-seat Prudential Center in Newark.