No. 12 Seton Hall placed on 3 years’ probation by NCAA 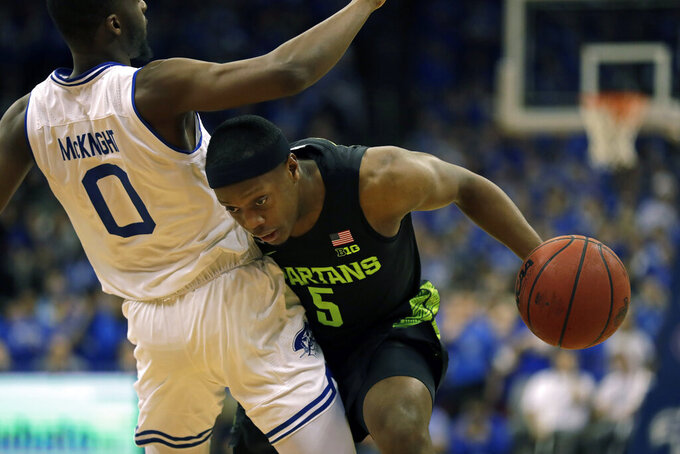 SOUTH ORANGE, N.J. (AP) — The NCAA has placed the men’s basketball program at Seton Hall on probation for three years, taken away a scholarship for the 2020-21 academic year and limited recruiting in each of the next two seasons as part of a negotiated resolution of a transfer tampering case started in 2016.

Under terms of the agreement announced Friday, Seton Hall coach Kevin Willard was given a two-game suspension he has already served, and his former assistant and current St. Peter’s University head coach Shaheen Halloway received a four-game suspension that has two games remaining.

Seton Hall, which is currently ranked No. 12 and dropped a 76-73 decision to No. 3 Michigan State on Thursday night, remains eligible for the NCAA Tournament.

The NCAA also announced Friday Seton Hall has been fined $5,000 plus 1% of the men’s basketball budget and had its scholarships reduced to a maximum of 12 in 2020-21. Willard will have to attend an NCAA rules seminar in 2020 and the program will have a two-week ban on recruiting communication this academic year and next.

Holloway, who was Willard’s assistant at Seton Hall in 2016, is prohibited from all recruiting communication for six weeks during the 2019-20 academic year. He also is required to attend a rules seminar in each of the next two years.

The case centers around current Seton Hall forward Taurean Thompson, who transferred from Syracuse to Seton Hall in August 2017.

During the investigation, the NCAA learned Holloway had approximately 243 impermissible contacts with the prospect's mother from Nov. 16, 2016 through Aug. 28, 2017 while the prospect was enrolled at his initial institution.

Willard, who has taken Seton Hall to the last four NCAA Tournaments, was penalized for failing to promote an atmosphere of compliance within his program. He admitted to not taking adequate steps to report or stop the calls when he found out about them.

According to the agreement, Holloway did not report the calls with the prospect’s mother because they involved a personal relationship outside of the prospect and basketball, and he believed the communications were permissible.

“Seton Hall University, in conjunction with the NCAA, recently concluded a review of an infraction within our men’s basketball program,” Seton Hall said in a statement Friday afternoon. “Our department was proactive in our review and fully cooperated with the NCAA enforcement staff. While the violation was inadvertent, it was nonetheless against NCAA bylaws, and for that we take full responsibility.”

The case was processed through the new negotiated resolution process. The process was used instead of a formal hearing or summary disposition because the university, the head coach, the former associate head coach and the enforcement staff agreed on the violations and the penalties.

The Division I Committee on Infractions reviewed the case to determine whether the resolution was in the best interests of the NCAA and whether the agreed-upon penalties were reasonable.

Holloway is in his second season at St. Peter’s. He will miss games against Providence on Saturday and Wagner on Wednesday. His first game will be against St. Francis, New York, on Nov. 30.