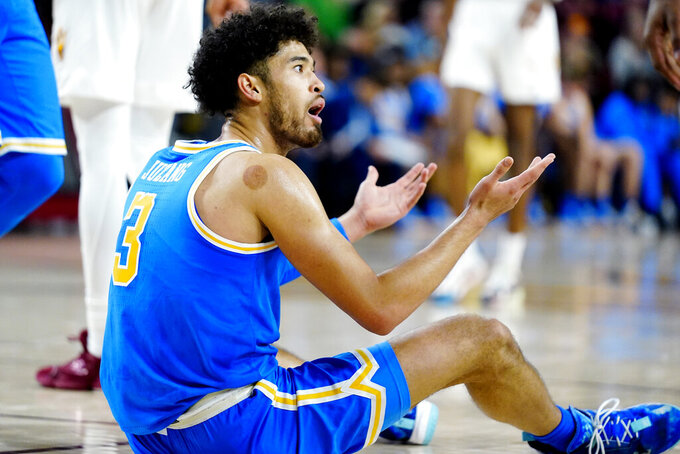 GAME OF THE WEEK: No. 12 UCLA at No. 21 Southern California, Saturday. The first of two meetings between the rivals this season will be a big one. UCLA dropped nine spots in this week's AP Top 25 after losing to No. 4 Arizona and Arizona State last week. The Bruins (17-4, 9-3 Pac-12) struggled offensively in both games and failed on chances to put the Sun Devils away in the triple-overtime game Saturday. The Trojans (20-4, 9-4) split against the desert schools last week, including a nine-point loss to Arizona. Saturday's game will be the first with both teams ranked since 2007 and 12th all-time. USC hasn't won a ranked matchup against UCLA since 1992.

LOOKING AHEAD: Arizona has a two-game lead in the Pac-12 standings as it heads to the Pacific Northwest to face the conference's Washington schools. The Wildcats moved up three spots in this week's poll after the impressive wins over UCLA and USC. They also beat Arizona State 91-79 on Monday. The Oregon schools have a busy week with three games each. Both play Cal and Stanford, with the Beavers also playing Colorado and the Ducks getting Washington State. Utah and Colorado also play on Saturday.

PLAYER TO WATCH: Azoulas Tubelis, Arizona. The Lithuanian sophomore has been bothered by a sore ankle in recent weeks, but it didn't slow him down last week. Tubelis was named the Pac-12 player of the week after averaging 16 points on 54% shooting and 8.0 rebounds in the wins over UCLA and UCLA.

ON THE WOMEN’S SIDE: No. 6 Arizona and Arizona State renew their rivalry with two games in three days starting Friday. ... No. 2 Stanford, which has a 2 1/2-game lead over the Wildcats in the season standings, has games against Oregon State, Colorado and Utah this week. ... The Beavers also host rival Oregon on Friday and the Southern California schools play the Washington schools. ... Stanford's Cameron Brink was named the Pac-12 player of the week after averaging 21.5 points on 61% percent shooting and 11.0 rebounds in road wins over UCLA and USC.