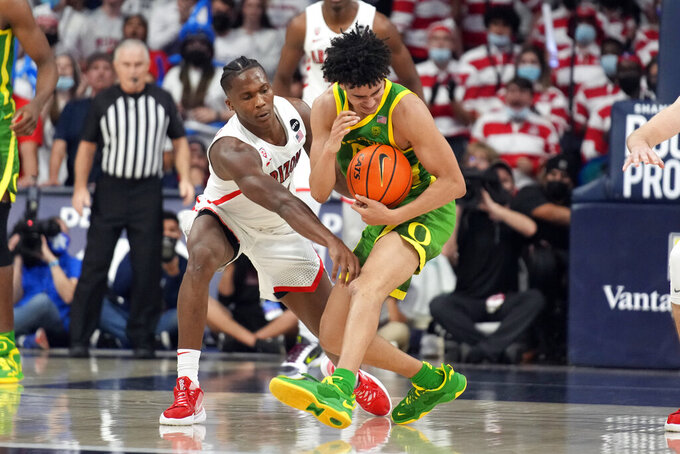 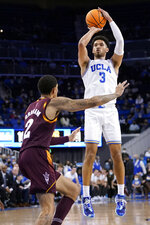 No. 12 UCLA at Oregon, Thursday. The Bruins (20-4, 12-4 Pac-12) have bounced back from a three-point loss to rival No. 16 Southern California with three straight wins to keep conference-leading Arizona within reach. UCLA pulled off an impressive 14-point win over Arizona State on Monday night despite playing without point guard Tyger Campbell (shoulder) and Peyton Watson (knee). The Ducks (17-10, 10-6) are in big need of a win. They seemed to be rounding into form by winning 10 of 11, but have since lost three straight, including an ugly loss to California and a sweep by the Arizona schools.

No. 2 Arizona's bid for its first regular-season title since 2018 and a No. 1 seed in the Pac-12 tournament goes through the mountain schools this week. The Wildcats (24-2, 14-1), who have a 2 1/2-game lead over UCLA and USC, play Utah on Thursday and Colorado on Saturday. ... Washington and Washington State, rivals clinging to NCAA Tournament hopes, play twice this week, Wednesday in Pullman and Saturday in Seattle. ... Stanford and Cal also renew their rivalry Saturday in Berkeley. The Cardinal won the first game 57-50.

Bennedict Mathurin, Arizona. The explosive sophomore guard from Montreal was named the Pac-12 player of the week after averaging 22 points, 4.5 rebounds and 3.0 assists in wins over the Oregon schools. It was Arizona’s fifth player of the week honor this season, matching its most in a season.

No. 2 Stanford (23-3, 14-0) kept its perfect conference record in tact with a 62-60 win over No. 25 Oregon. The reigning national champions have won 29 straight games against Pac-12 opponents with games against the Washington schools this week to close out the regular season. The Cardinal have already clinched their 25th Pac-12 title and will be the No. 1 seed in the conference tournament. ... Washington State's Johanna Teder was named the Pac-12 player of the week after averaging 20.5 points, 3.0 assists and 2.0 steals in wins over the Arizona schools.