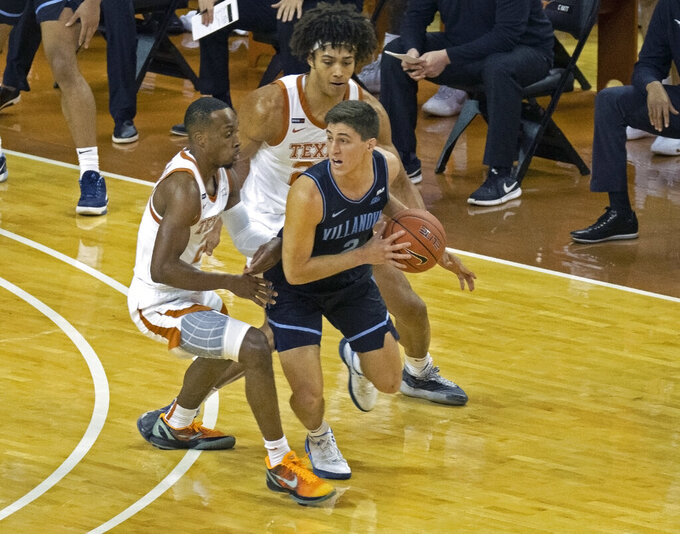 AUSTIN, Texas (AP) — After opening the season in a Connecticut “bubble,” Villanova went all the way down to Texas to get a big win.

Jeremiah Robinson-Earl and Justin Moore each scored 19 points and No. 12 Villanova held on late to beat No. 17 Texas 68-64 Sunday, handing the Longhorns their first loss after a strong start.

“Road attitude is something we talked about,” Robinson-Earl said. “We just tried to stay after it.”

It took some physical play against an experienced Texas lineup, some late free throws and some old-fashioned grit to close it out.

Collin Gillespie made four free throws over the final 15 seconds to secure the win for the Wildcats (4-1). Jermaine Samuels, who sat out practice this week because of a sprained pinky on his right hand, collected a game-high 12 rebounds.

“I wasn’t even thinking about it,” Samuels said. “You could feel it here and there on deadballs, but I was just focused on what the next play was.”

Courtney Ramey and Matt Coleman III each scored 17 points to pace the Longhorns (4-1). Texas had won the Maui Invitational in the program’s best start in six years under coach Shaka Smart, who just last season was under intense pressure and speculation he could lose his job.

Ramey fouled out to send Gillespie to the line and he calmly stroked both shots to put the Wildcats up by four. After Coleman made a twisting layup, Gillespie was again back at the line and swished two more. Gillespie finished with 12 points.

Ramey made a long 3-pointer to tie the game at 57 before Villanova answered with a 3-pointer from Cole Swider with 1:58 to play and the Wildcats held the lead to the end.

Villanova: The Wildcats won in their first trip to Texas since winning the 2018 national championship in San Antonio. They did it with clutch play from senior leaders Gillespie and Samuels that can carry teams through tight games and a huge, physical push from sophomores Robinson-Earl and Moore. Gillespie squirmed away from two defenders to snare the late inbounds pass that set up his first free throws.

“You could tell the kids what to do, but when the kids have been there, they know what to do,” Villanova coach Jay Wright said. “Jermaine had big-time drives at the end of the shot clock.”

Texas: The Longhorns have been impressive early but let a chance for what could have been their biggest win so far slip away. Shooting guard Andrew Jones, who Smart says is his best shooter, was a non-factor with just 5 points on 2-of-10 shooting. Coleman, the MVP of the Maui Invitational, had a key turnover after Swider’s 3-pointer.

“Those guys know how good collectively that the group can be if they all do their part,” Smart said. “That’s why in the locker room we had a lot of guys upset, saying, ‘’That’s a game we’ve got to take.‘”

Texas freshman forward Greg Brown was one of the top recruits in the country and he showed flashes of his talent as well as how far he still has to go. Brown scored 7 points and two big blocks. His best effort came in the second half when he blocked a shot, then missed an alley-oop dunk, but grabbed the rebound and made a long jumper. Brown started the season 1-of-16 on 3-pointers, but made his first attempt Sunday.

The Wildcats had a big advantage on free throws even before Gillespie’s clutch shooting at the end. The Longhorns were 3 of 6 on free throws, including a big miss by Kai Jones in the final 20 seconds that could have cut the Villanova lead to one. The Wildcats were 14 of 19 from the line. Samuels said the Wildcats wanted to be “as physical as possible without fouling.” That careful play didn’t let Texas get into the shooting bonus until the final minute.

Kai Jones, who doesn’t start for Texas but is averaging 20 minutes per game, is shooting 19 of 22 this season.

Villanova plays at Georgetown on Friday in their Big East opener.