No. 13 Illini survive scare against Northwestern, 73-66 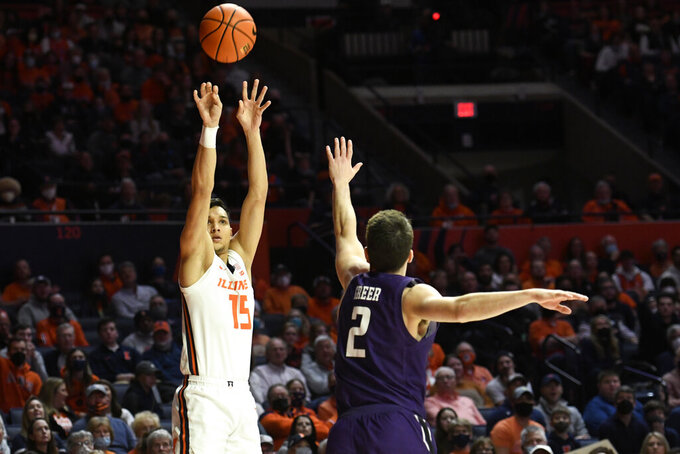 CHAMPAIGN, Ill. (AP) — Kofi Cockburn scored 19 points and grabbed 15 rebounds to help No. 13 Illinois stave off a late comeback by Northwestern to beat the Wildcats 73-66 on Sunday.

Illinois led by 18 points after Alfonso Plummer’s 3-pointer with 13:05 left, but Northwestern responded with a 19-2 run to pull within one point with 6:16 to go.

“I had a career-high (six) turnovers today,” said Cockburn, who recorded his 41st career double-double to tie Illinois’ record set by Skip Thoren (1963-1965). "It’s about focusing, trying to slow the game down and not rushing stuff, being strong with the ball. I got frustrated, and I’m sure these guys did, too. We’re going to grow from that.”

The home win keeps the Illini in sole possession of first place in the Big Ten, sitting a half-game ahead of Purdue and one game ahead of Wisconsin after a week in which all three teams lost.

“(Cockburn) is just such a tough guy to play against,” Northwestern coach Chris Collins said. “There’s no one like him in the country with that force, with that size. It just puts a lot of pressure on you in a lot of ways.”

Illinois took a 44-30 lead into halftime thanks in part to its 9-of-16 shooting from 3-point range in the first half, including four treys from Plummer and a pair from freshman RJ Melendez.

Plummer finished the game with 19 points, including making 5 of his 11 3-point attempts. Melendez added a career-high 14 points and six rebounds.

“My style of play has grown a lot,” Melendez said. “Just being with the vets every time in practice, going at them, guarding them because I know it’s going to make me better. Getting all the knowledge I can.”

A bucket from Cockburn, then dunks from Omar Payne and Melendez helped Illinois build an 18-point lead before the under-12 timeout. Payne blocked a shot by Elyjah Williams, then Coleman Hawkins started the Illini on a fastbreak, providing a smooth dish for a Melendez dunk that made it 50-32 with 14:37 to play.

Northwestern then went on its run.

Northwestern: The Wildcats are far from an easy beat. They may not have the firepower to get over on the league’s elite teams, but there’s an opportunity to finish the season above .500 with six games to go and Nebraska, Minnesota (twice) and Penn State still on the schedule.

Illinois: The Illini have now won 25 of their last 29 games in Big Ten play. The team is prone to offensive lulls, but Cockburn is the ultimate security blanket in the paint. Perimeter threats like Plummer continue to capitalize on the space created by the star center’s presence.

Illinois: At Rutgers on Wednesday.