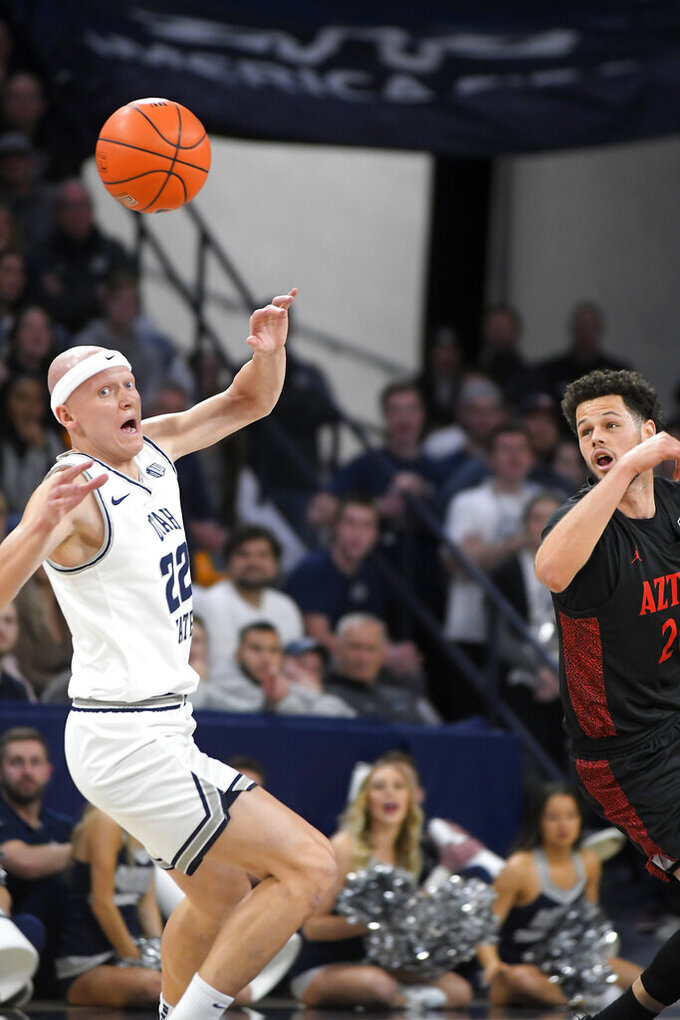 LOGAN, Utah (AP) — Stout defense is a cornerstone of success for San Diego State this season. It certainly helped the No. 13 Aztecs extend their unbeaten start in a tough road environment.

Malachi Flynn scored 22 points, Matt Mitchell added 19 and San Diego State beat Utah State 77-68 on Saturday night to improve to 15-0. The Aztecs own the nation's longest winning streak. Auburn is the only other undefeated Division I team.

San Diego State shut down the Aggies on the perimeter, forced turnovers at key times and controlled the tempo on offense.

“We came in here and we were strong,” Mitchell said. “Stronger together is what we preach. Five fingers on a hand. If you're missing a finger, you can't really make a fist. It's not effective.”

San Diego State (15-0, 4-0 Mountain West) snapped the Aggies' 15-game home winning streak and beat them for the 12th time in the last 14 meetings. The Aztecs shot 51% from the field and scored 13 points off 11 turnovers.

Sam Merrill had 26 points and Neemias Queta added 15 points and 14 rebounds for the Aggies. Utah State (13-4, 2-2) lost back-to-back games for the first time since coach Craig Smith took over the program before the start of the 2018-19 season.

“We played good. San Diego State just played better,” Queta said. “Hats off to them. They hit big shots whenever they needed to.”

Consecutive 3-pointers from Flynn and Mitchell sparked a 10-1 run that helped the Aztecs take a 21-12 lead with 7:18 left in the first half. Flynn's outside basket barely beat the shot-clock buzzer before a media timeout. Utah State enabled the run by going more than five minutes without scoring.

San Diego State made six straight baskets to stay in front after the Aggies started to hit shots. Trey Pulliam capped the stretch with a jumper to give the Aztecs their largest first-half lead at 34-23.

Many of their first-half baskets came after executing high ball screens to perfection. San Diego State forced Utah State to defend late into the shot clock on possession after possession.

“The beauty with the ball screens was, in the past, we might have shot it off of them all the time,” Aztecs coach Brian Dutcher said. “This time I thought we really got in there and we probed and we moved it.”

The Aztecs eventually built a 16-point lead early in the second half, going up 53-37 when Jordan Schakel buried a 3-pointer to cap a string of three straight San Diego State baskets. Queta went to the bench for a long stretch early in the half, making it tough for Utah State to keep it close, after picking up three personal fouls in less than three minutes.

Diogo Brito and Merrill nailed successive 3s after Queta returned to spark a 12-3 run. Queta finished it off with a dunk that cut the Aztecs’ lead to 56-49.

Mitchell scored back-to-back baskets to keep the Aggies from getting closer. They helped San Diego State open a 63-50 lead with 5:41 left.

“They made us pay and that’s what great teams do,” Smith said. “I’m proud of our effort. We played our tails off. We had some good looks, they just didn’t fall. We have to get that shored up. We’ve got to bounce back."

After missing two games with an injury he sustained against Florida, Queta returned to the lineup for Utah State. He ended up playing a season-high 30 minutes and had his first double-double of the season. The sophomore 7-footer did not start working out individually until Wednesday when the Aggies played UNLV. His quick return to the starting lineup Saturday was a surprise.

“This was a last-second deal today where he got cleared,” Smith said. “Literally an hour and a half before game time.”

San Diego State outrebounded Utah State 34-30 and had four players with at least five rebounds. Mitchell led the way with a team-high seven. The Aztecs have finished with more rebounds than 11 of their 15 opponents this season.

"I thought we did a pretty good job on the glass to finish possessions,” Dutcher said.

San Diego State: As they have done all season, the Aztecs rose to the occasion at critical junctures on both ends of the court. They forced numerous contested looks at the basket and answered Utah State rallies with timely field goals.

San Diego State is in the mix to move into the Top 10 after picking up a key road victory in Mountain West play.