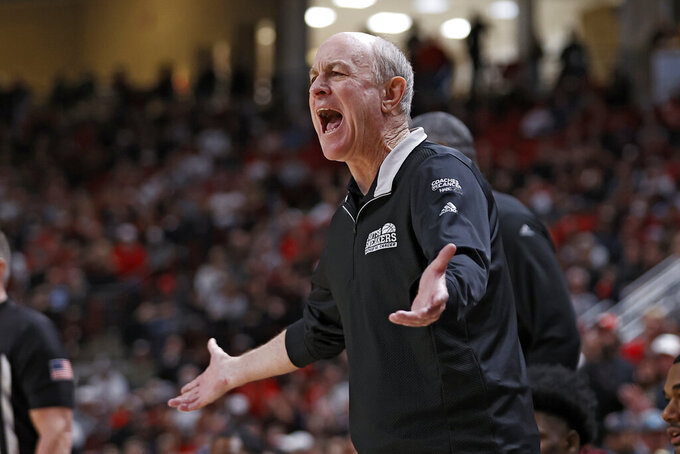 Mississippi State coach Ben Howland yells to his players during the first half of an NCAA college basketball game against Texas Tech, Saturday, Jan. 29, 2022, in Lubbock, Texas. (AP Photo/Brad Tollefson)

LUBBOCK, Texas (AP) — Texas Tech dominated on both ends of the court, proving to be even better than what Mississippi State coach Ben Howland watched on film preparing for the Big 12/SEC Challenge.

Adonis Arms had 16 points and seven assists for the 13th-ranked Red Raiders, who stayed undefeated at home with an overwhelming 76-50 victory Saturday night. Texas Tech shot a season-high 61.7% from the field and had 20 assists on its 29 made baskets, while the Bulldogs had a season-high 22 turnovers in their lowest-scoring game this season.

“A very, very tough day to be handled the way they handled us,” Howland said. “They’ve got to be one of the best teams in the country. I’d be surprised if they’re not an Elite 8, Final 4 team. ... They’re older, they’re big, they’re strong. They have an unorthodox way they defend.”

Kevin Obanor added 13 points while Mylik Wilson had 12 and Bryson Williams 10 for the Red Raiders (16-5), who are 13-0 at home this season. Marcus Santos-Silva had nine rebounds.

“It’s always exciting when you can share the ball and spread the points around,” Texas Tech coach Mark Adams said. “It makes it difficult for opponents to scout you and focus on one or two guys. You look down our lineup and we have a lot of guys that can score double figures."

Mississippi State (13-7), coming off an overtime loss at No. 12 Kentucky, never led again after Arms made the first of his three 3s less than three minutes into the game.

Bulldogs leading scorer Iverson Molinar, a focus for the option-filled Tech defense, had a team-high 12 points, but that was nearly seven below his season average that was tied for second in the SEC. He also had a team-high five turnovers.

“We did a bad job executing,” Iverson said. “They’ve got an unorthodox defense and we just didn’t execute what we did in practice.”

Arms made a jumper with 7:18 left in the first half to put the Red Raiders up 21-15, and start a half-ended stretch when they made eight of their last 10 shots for a 37-22 lead. Arms also had two 3-pointers and three assists in that span.

“For me, basketball is about sharing the ball and being a part of my team and having fun out there,” Arms said. “With scoring, I took my chances in the first half."

Mississippi State: DJ. Jeffries added 11 points and Rocket Watts 10 for Mississippi State. ... .The Bulldogs had 12 turnovers by halftime, already one more than they had in each of their previous two games. Texas Tech converted the 22 overall turnovers into 24 points.

Along with the 24-11 advantage in points off turnovers, Texas Tech outscored the Bulldogs 44-16 in the paint. ... The seven assists by Arms were only one fewer than Mississippi State has a team.

Arms was back in the starting lineup with Terrence Shannon again sidelined by a nagging back issue, and matched his previous season highs with 15 points and five assists before the break. Shannon was only 1-of-10 shooting in double-overtime loss at No. 5 Kansas on Monday night in only the junior guard's fourth game back from missing six games in a row over a month. Adams said Shannon might be able to play the next game.

While Howland will obviously watch the film, he had no plans to review that with his team. “When you get beat that bad, you flush it and move on,” he said.

Texas Tech could possibly move up in the Top 25 for the fourth week in a row, even with a loss, that being 94-91 in double overtime at fifth-ranked Kansas last Monday night.